“Slave to the Traffic Light” is not quite an instrumental…though I think it qualifies as an honorary one. It’s a song that varies in length but usually clocks in at around ten minutes or so. The lyrics, such as they are, are dealt with in what feels like about twenty seconds. It’s a song about the experience of listening to it. Of floating away on it. Of letting it remind you of where you were. When you were. How you were.

Driving down to Florida from New Jersey. Two or three hours into the journey. I was already gone. I was never going home. Not that home. I had burned as much music as I could for the ride, and it was hidden away on a Phish mix somebody posted. It was a live version of “Slave to the Traffic Light,” and I couldn’t tell you know what show it was from, where he found it, why he included that one over the literally hundreds of others. But it was gorgeous. The sky was flat, expansive black. My windows were down. There were white lights on tall poles far off in the distance, and then, as the song swelled, around me. One of those very rare moments that I could actually feel my life changing.

Outside, after Hurricane Wilma. A house with no electricity. Trucks had stopped by several times that day, offering bags and blocks of ice to keep our food from spoiling. I waved them on. I was sure families needed it more. At night it sweltered. I took a pillow and a blanket and I laid outside. Everything was so quiet and still. I kept my eyes open. I stared up at the stars. “Slave to the Traffic Light” came on my iPod. It traced the stars with me. Reminded me of how much there was out there to see. For what should have been a night of inconvenience, it’s one of the most relaxing things I can remember.

Shoveling snow in New Jersey. My long, long driveway. My father and brother inside. They weren’t very interested in clearing any of it away. They enjoyed the downtime. Snow was an excuse to not do anything. But I had to be at work the next day, and I knew that if I let the snow freeze overnight, trying to force my car onto the road was going to be an exercise in layered frustration. So I shoveled. Alone. I brought out a small stereo. I played a show from Binghamton in 1995. This song came on toward the end. I remember the shovelfuls of snow breaking apart in the air, in the sunlight, in the glimmers of the fading afternoon to the twinkling of Page McConnell’s gentle keys.

Driving in Montreal, where all of the street signs were in French. A friend I wouldn’t see many times more was sleeping in the passenger seat. This song almost always seems to play at night. The stars are in her eyelashes, and to this day I don’t know that I’ve ever seen a face so vulnerable and at peace. When she was awake we’d listen to Pink Floyd, and I’d hear songs of theirs I never knew existed. While she slept I’d listen to Phish, and fall in love with being alive in the way that you only can at night, in an unfamiliar city, dead tired, with somebody dreaming at your shoulder.

An ex-girlfriend. One I would eventually be afraid I had lost forever. But I didn’t. She was stronger than that. She was stronger than I was. She called me from work. She’d just listened to a version of “Slave to the Traffic Light” from 1998 that I’d posted online. She wanted to tell me how beautiful it was. She wanted to tell me that she couldn’t stop listening to it. One thing I’ve learned in my life is that you can’t count on having overlap with others in terms of the music that moves you. When you find it, make a point of cherishing it.

Sitting around a campfire in Coventry, Vermont. The night of Phish’s final concert. Or so we, and they, believed at the time. We were at a campsite, with some fellow travelers who were also refused admission…despite having purchased tickets. Mutual tragedy brought us together. We listened to the band’s farewell show on somebody’s car stereo, while we watched the fire slowly die out. Not counting the encore, Phish ended their last concert with a low-key but elegant “Slave to the Traffic Light.” It was the perfect soundtrack to a dying flame, and the temporary intersection of lives that would not meet again.

I think I like instrumentals so much because they’re absorbent. They tend to collect the memories that happen around them.

“Slave to the Traffic Light” is a song of triumph. At least, it is to me. A song of swirling, circular triumph…and memories of things past, and people who exist only in my past.

Years ago I was bored by it. I wondered why it didn’t have any lyrics. I think I even wondered if maybe you were expected to invent your own lyrics.

Now I realize it’s just music to live your life to.

I love music that doesn’t have need lyrics. 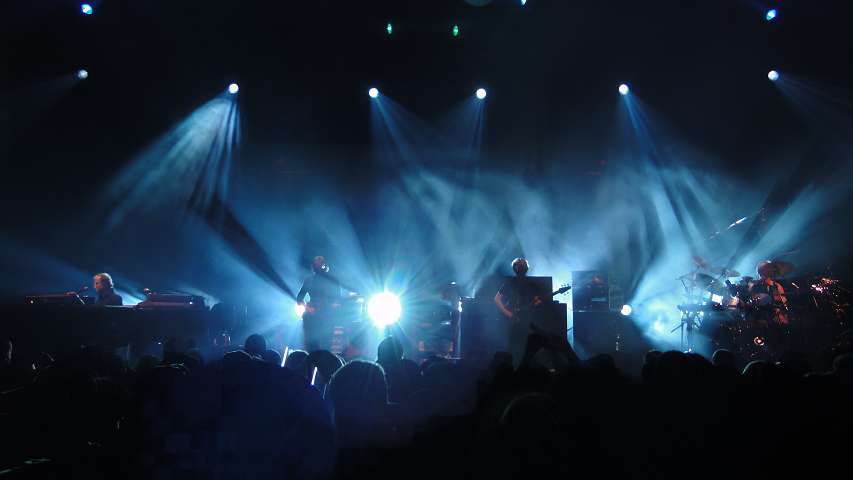 One thought on “Slave to the Traffic Light”