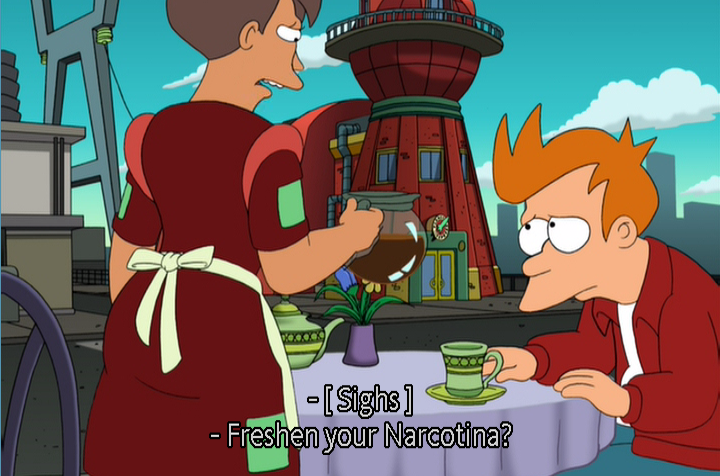 I’ve had this idea for a while…an intermittent series of (likely) short posts, wherein I either crowdsource an answer to something I’ve never understood, or open up something to debate.

This is always the one that I’ve wanted to open with…probably because it just seems so simple, and yet I have no answer of my own.

In one of my favorite episodes of Futurama (“Parasites Lost,” season three), Fry is feeling a little low. Leela runs off on him, and a waitress appears, offering to freshen his beverage.

Odd lines in Futurama aren’t anything unique…but re-watching episodes multiple times usually lets them resolve into jokes I simply didn’t understand the first time. (Or second. Or third…) They may or may not be funny, but I at least get a sense of what the show was doing.

The beverage looks a lot like coffee, and Fry accepts her offer for a refill because he needs something to settle his stomach. But it’s not coffee.

For a long time, I thought she identified the drink as “nocotina.” The closest I ever came to assigning that any meaning was deciding it could have been some futuristic liquid nicotine. But that was a bit of a stretch, at the very least.

Here, taking a screenshot with the closed captioning on, I see that she’s actually saying “Narcotina.” Which, as Hermes might say, just raises further questions.

The word is capitalized in the subtitle, which may not mean anything, but may also mean that it was capitalized in the original script. (Assuming that’s what they worked from for the DVDs, of course…and that’s certainly not always a safe assumption.) Is it a brand name? Was this some kind of product that was meant to recur throughout the world of Futurama, like Slurm or Bachelor Chow, but found itself relegated to this throwaway line?

The thing is, if they just wanted to give Fry a chance to dwell on his discomfort (emotional and physical), she could have refilled his coffee. Granted, coffee refills aren’t inherently funny…but then again, this mystery beverage doesn’t have a joke attached, either.

Or does it? In the glory days of Futurama, just about everything had a joke attached. Lines were very carefully chosen…or at least seemed to be. If this line was genuinely meaningless, why not call it coffee? Or if it’s supposed to just be some futuristic spin on coffee, why not call it something that sells the relationship more clearly?

I guess the visual of the coffee pot and the liquid sells it well enough, but at that point, what’s the joke? That something that looks like coffee isn’t coffee? Instead it’s…some other thing I don’t understand?

“Narcotina” works better than my original mishearing, for sure. It shares a root with “narcotic,” which could lend itself to a joke, but I’m not sure it does. You could pull out a decent gag at the expense of Coca-Cola’s original list of ingredients, but this isn’t a carbonated beverage; it’s something served in a coffee pot. If that’s what they were going for, they ham-strung the association.

It’s odd the way these little unanswered questions stick with you. “Parasites Lost” is a truly excellent episode of television…which makes small moments like this, the ones that don’t quite gibe, stand out. When everything’s moving along perfectly, the slightest imperfection (perceived or actual) is thrown into sharp relief.

Throughout the episode, Professor Farnsworth babbles about bodily functions and organs and things along those lines, and I have no idea if anything he’s saying is accurate. Then again, he’s also engaging in a microscopic gunfight with a bunch of intestinal worms, so realism clearly isn’t what I’m craving here.

It’s just that when Farnsworth says these things that may as well (to my uneducated ears) be meaningless, they at least make sense. If he says that they’re headed toward a certain part of the body to do such and such, then that’s fine. It doesn’t matter if the terminology is made up…it’s a character explaining what he’s about to do.

Here, with the Narcotina, we have some terminology that’s made up…but it doesn’t seem to explain anything.

“Freshen your coffee?” might be a waste of a line, but it wouldn’t trip anybody up to hear it.

“Freshen your Narcotina?” sticks with me. An unsolvable koan.

So there you go. This [week’s / month’s / year’s] Pop Question. What the fuck is Narcotina?