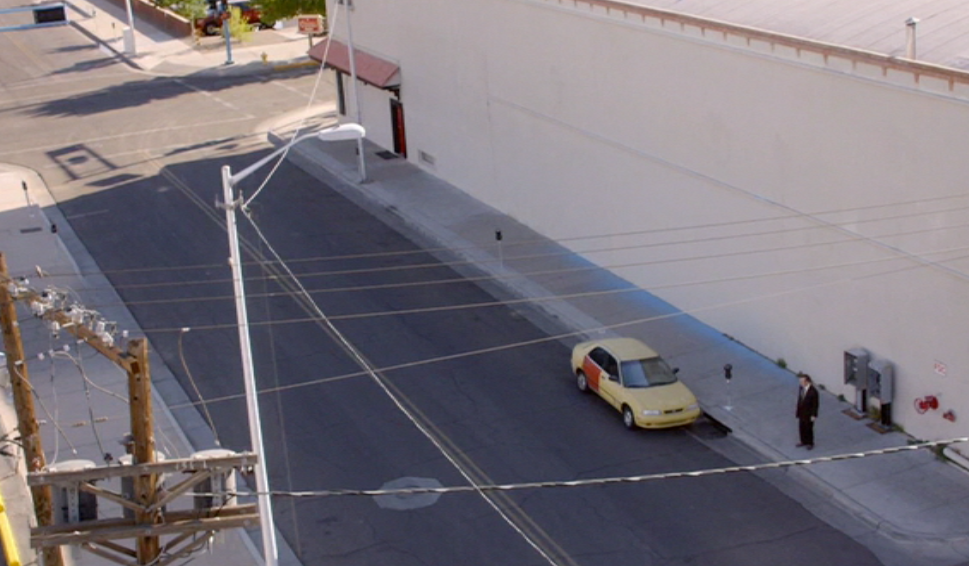 “Nacho” manages to be both the funniest and most tense episode so far, which is fitting, as the entire chapter is a study in contrasts.

From the superficial (the fact that the episode is named after a character who appears in only one scene) to the artful (McGill’s brutal confrontation with Mike gives way to a surprisingly tender moment between the two), expectations are established, subverted, and reverted.

As Tom Petty once sang, “Everything changed, and then changed again.” Six words that could sum up the entire episode.

My favorite establishment / subversion / reversion comes almost exactly halfway through the episode, when McGill is pursued by what he believes to be assailants. As he flees the police roll up, and he is overcome with cosmic gratitude. Then he realizes that the assailants were police themselves, and he’s under arrest. Flip-flopping tonality is something that poorly written television shows suffer from regularly. Better Call Saul (in this sequence specifically and in this episode in general) takes what lesser shows struggle to avoid and turns it into a kind of mission statement. The result is a masterful comic tension that “Nacho,” impossibly, sustains all the way through.

The first subversion comes as soon as the episode opens, nullifying last week’s cliffhanger while at the same time respecting it, and following it through. At the end of “Mijo,” Nacho approached McGill and asked him to assist in a robbery. McGill quietly watched him go, and we were left with two implied outcomes: either McGill helps Nacho, or he chooses not to.

This episode opens by showing us that McGill has chosen a third option: to warn the potential victims. To a yes/no question McGill indeed answered no, but he answered a very specific kind of no that ends up implicating him more deeply than a yes would have. Everything changed, and then changed again.

The victims in question are the Kettlemans. They’ve been important to the past two episodes as well, though I didn’t really have reason to get into them until now. In “Uno,” McGill loses a chance to represent Mr. Kettleman, who is accused of embezzling around one million dollars from the City of Albuquerque. Later, he enlists the help of two young con-artists to manipulate Mrs. Kettleman into hiring him…an attempted manipulation that leads McGill and his cronies to the desert at the beginning of “Mijo.” This is where McGill, in a fit of desperation, reveals his machinations to Tuco’s crew. And it’s why, at the end of that episode, Nacho makes him the offer that he does. He knows the Kettlemans have this money. The question is, does Jimmy McGill want a cut?

Or, at least, that’s the question we all inferred. And it’s certainly the question that Saul Goodman would have answered. (Quickly, and loudly.) Jimmy McGill instead helps himself to the cucumber water he isn’t allowed to have during business hours, gets drunk, and, little by little, figures out a way to do some good.

What follows is farce. Harrowing, terrifying farce. It’s like a lost episode of Fawlty Towers in which Basil unintentionally sics a murderous drug dealer on a family of four. It’s that good, and that crazy.

It’s also, again, a study in contrasts. McGill using a very DIY voice modulator to warn the Kettlemans is hilarious…tempered immediately afterward by the shot of Nacho stalking them, and then their actual disappearance. It swings back to comedy, though, when a conversation with Kim reveals that it’s the same voice modulator he uses to play the part of the Sex Robot when they talk dirty to each other.

And, of course, there’s the sequence that begins with McGill and Mike coming to blows in the parking lot and ends with them coming to an unexpected mutual respect in the stairwell. Whenever we think we’ve got our tonal bearings, we hit another jolt. And never does it feel cheap. In fact, it feels like a mandatory part of this show’s DNA; Saul Goodman was introduced to us as the reliable comic relief in a world of decay and creeping misery. Now that we dive into the past to find out what made him who he is, we don’t see a world of grey areas so much as we see a world of endlessly, insanely flickering blacks and whites.

It takes a notable toll on our hero to do the right thing, and as soon as he does he’s hit with a series of incremental punishments. This in itself is enough of an explanation of how Jimmy McGill becomes Saul Goodman. When it’s easier — and maybe even safer — to do the wrong thing, how long can a beaten man continue to do right?

Last week I wondered what it would take to push a man over the line, to stop him saying “Absolutely not” and start him saying “Yes, please.” “Nacho” has that answer; you just make “absolutely not” lead, reliably, to tragedy. Doing the wrong thing is then redefined as not an act of selfishness, but an act of survival.

Really, though, talk like that probably makes the episode sound more tense and less funny than it actually was. “Nacho,” sincerely, is a riot. McGill getting unwittingly drafted to act as Nacho’s attorney (“…you sure he asked for me?”) is great, as is Odenkirk’s floundering as he tries to force his nervousness to evolve into confidence when meeting with his new client. (More contrast for you, there.) And the line of the night comes courtesy of Jimmy’s complete lack of self-awareness as he scolds Kim: “You see? This is why people hate lawyers.” That’s character building through brilliant punchlines, there. How often do you see that?

I don’t think “Nacho” hit the highs of “Mijo,” but I also think it accomplished something very different than that episode did. Whereas “Mijo” assured us the show could achieve greatness, “Nacho” shows us the show’s inherent cleverness, spinning an intentional befuddle out of what — at heart — is a simple, uncomplicated mystery.

My only real question about the episode is the ending. The way the duffel bag rips open, spilling money everywhere, is played like a revelation. I’m not sure why. Did I jump the gun on assuming the Kettlemans were guilty? Maybe that was something I wasn’t supposed to realize until the end…but the fact that they kidnapped themselves rather than turn to the police cemented it for me well before we saw the evidence.

I’m not quite sure what to make of it. It doesn’t seem to be either an effective shock or a riveting cliffhanger. We expected them to have the money, and then they are shown to have the money. I may well be missing something here (go to town, dear reader), but even if I’m not, it barely amounts to a complaint.

When a story is told this well, I’m not going to quibble about its punctuation.