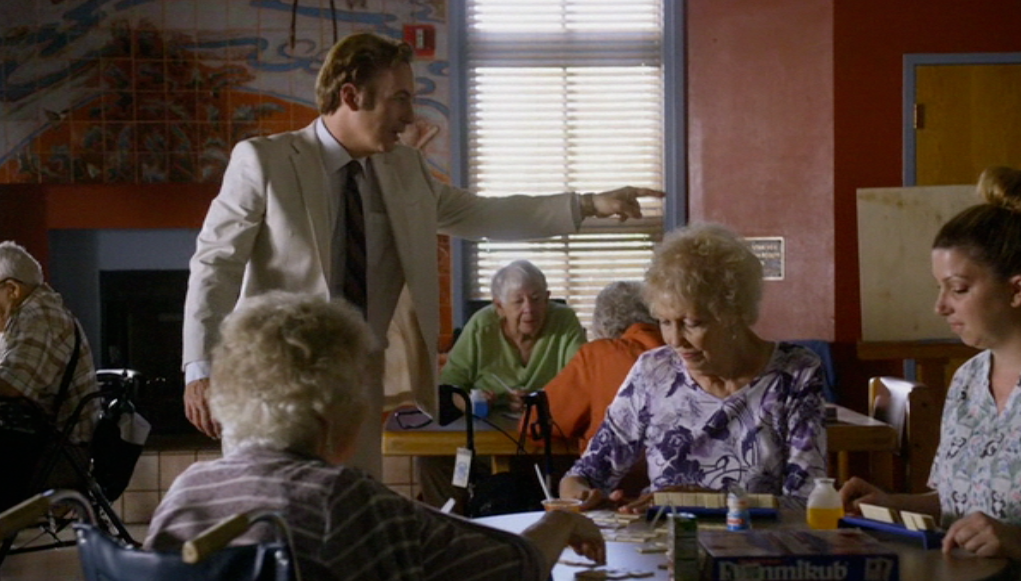 Here’s something I didn’t expect to say before this show premiered: Better Call Saul has an incredible sweetness at its core.

Remember, now, that this is a spinoff of Breaking Bad, where sweetness was not unknown but where it inevitably led to tragedy. What’s more, Better Call Saul is focusing on a character who was, in so many ways, an open facilitator of that tragedy. We met him in an Albuquerque of cynicism and despair, and he was at home there.

This is the conflict at the heart of Jimmy McGill, and I think it’s one that’s been there even when we knew him as Saul Goodman. In Breaking Bad, Saul was the one who expanded Walter’s reach, his empire, and, ultimately, his capacity for destruction. While he was never directly involved with what were probably Walt’s darkest actions, he kept the plates spinning in the background. What’s more: he was happy to do so.

And yet, nobody disliked the guy. As frustrated as we got with Walt, as frightened as we got of Gus, as worried as we got for Jesse, Saul was always just there. He didn’t inspire the same kind of severe audience reaction, because he was somehow separate from the events unfolding around him. He was of them, and not of them. From the moment he entered that world — in a satirical, comic bubble — he felt safe.

Whatever happened, Saul was going to be okay. And we were perfectly happy with that. In spite of the fact that he was doing Very Bad Things, we needed to trust that he was going to be fine…even when we could trust in nothing else. There’s a reason, after all, that his kind of character is referred to as comic “relief.”

In Better Call Saul, Jimmy’s been up to some fishy business, but we love him. And “Alpine Shepherd Boy” shows us why: he can be a good person. He has the potential in him, somewhere, to be an excellent human being. He won’t become one through hard work and initiative, of course…he’ll become one (if he ever does) through dodges and deception. But that’s what makes him such a great character; he operates in an intrinsically hateable way, but never becomes hateable himself.

“Alpine Shepherd Boy” seems to offer a thematic bookend to a great sequence in “Mijo.” Whereas that episode carved for us a representative cross-section of what Jimmy McGill’s life would look like as a public defender, this one shows us what his life would look like if he embraced semi-legitimacy. In short, he goes from representing those who need a lawyer and can’t afford one, to representing those who don’t need a lawyer but can afford to throw their money away on one.

It’s a fantastic series of scenes, showing our unhateable shyster meeting with a fanatical secessionist, the inventor of a sex toilet, and, most lucratively, an old woman relaying complicated plans for the posthumous distribution of her porcelain figurines. Across each of these we learn a little more about Jimmy, but what really stands out is how strong Bob Odenkirk is as an actor.

I know Odenkirk very well from many things, not the least of which is Mr. Show. Mr. Show was a sketch comedy program that ran for four seasons on HBO. It’s also one of the very few sketch-based examples I point to (along with Monty Python’s Flying Circus and The League of Gentlemen) when I argue that good acting elevates good comedy.

In Mr. Show, the sketches didn’t wear out their welcome. They flitted and evolved and darted across the screen. At no point did the show technically need Bob Odenkirk and David Cross to deliver legitimately impressive performances…but the two of them did anyway. And that’s, I honestly believe, what gives it staying power. In sketch comedy, jokes will fall flat. They have to; mathematically, there’s no way to try to spin so many different kinds of laughs out of so much material and have it all land successfully. Put good acting behind it, though, and even the weakest skits become interesting, and instructive.

Odenkirk is a master. Watching those three scenes of him with clients, it’s impossible to deny that. His attempt to maintain composure in front of the secessionist (and then again for a whole other reason when he’s offered a million dollars), is solid work. His fumbling lies about practically specializing in patent law are delivered perfectly, with just the right amount of confident deflection. And his response to the old woman who takes far too long to hand him a figurine (“Oh.”) takes understatement and evolves it into an artform.

But what about the sweetness I mentioned?

Well, it comes out of last week’s cliffhanger…which was not where I expected it to be. While “Alpine Shepherd Boy” moves the story forward from Jimmy’s billboard anti-heroics, the real stakes come as a result of Chuck stealing his neighbor’s newspaper.

A very funny sequence in that episode becomes a sad one here, as poor Chuck is tasered by the police and threatened with involuntary commitment. It’s a genuine achievement for “Alpine Shepherd Boy” that the funniest extremes of Chuck’s “condition” lead us smoothly into the saddest.

Chuck — played by Michael McKean — suffers from what Jimmy oversimplifies as an electricity allergy. From the very first episode we’ve had indications that it’s a psychological problem rather than a physical one, and “Alpine Shepherd Boy” proves that conclusively. But it’s also evidence that Jimmy loves his brother, and that’s where the sweetness lies.

While Jimmy may be humoring Chuck, the fact remains that he does take care of him. He doesn’t humor him because it’s the easy way out…he humors him in spite of the fact that this means he’ll have to keep his brother in groceries, ice, and newspapers until the day one of them dies.

And when Hamlin — Chuck’s law partner — shows up at the hospital, it almost looks like Jimmy’s caved. He says he’ll commit his brother just so that he can cash him out of the law firm. A moment later we learn that this isn’t true, and he only said it to make Hamlin sweat. It was a dishonest tactic, but one that served, he felt, a better purpose.

Something I haven’t mentioned much about is Jimmy’s relationship with Kim, played by Rhea Sheehorn. Sheehorn’s been in a lot of things, it looks like, but I’ve only seen her in this…and, god, she’s good.

There’s a level of remarkable interplay between her and Odenkirk. Chemistry, as Chuck would say, is an oversimplification, even if it’s largely correct. There’s something about them that feels real. The way she’s more capable, and yet admires his tenacity. The way she’s above him in station, and yet is envious of the stories he gets to tell of his crazy clients. The way she’s attractive enough that a man like Jimmy McGill shouldn’t even turn her head, but she also knows that he listens…and that he cares. He’s open with her. He’s honest (so much so that he’ll break an NDA just to make her laugh). He’s human. She wants that.

That’s the real sweetness I felt in the episode, coming to a head in Chuck’s hospital room, when she can’t bring herself to break anybody’s heart by disagreeing with them. She knows she’s dealing with two McGills that are, each in their own way, liars. And yet she cares about them. At any given point she could open her mouth and prove both of them wrong. But she keeps her mouth shut, because she’d rather keep them than come out on top.

Kim is my favorite new character on this show, and the ease with which she and Jimmy slip into each other’s lives is a delight. In fact, I’m sad that Breaking Bad introduced us to a post-divorce Saul. It means that whatever happens between these two, there’s a termination point. And I’d be shocked if it was a fair or pretty one. As it stands, Kim is marching toward disappointment…which makes the happy accident of Sheehorn and Odenkirk working so well together feel like a profoundly distressing tragedy.

There’s also a sweetness to Jimmy’s relationship with Mike, one that looks to blossom into something truly interesting next week. So…maybe I’ll save my talk about that for then.

Jimmy McGill has a heart. He’s a showman and a flimflam man, but one (for now) with a conscience. When Kim turns him on to the idea of specializing in elder law, he latches right onto it in a way that feels exploitative (for obvious reasons), but also genuine. After all, the old woman with the figurines was the only client he was actually able to help.

His foray into elder law is a lot like one of those optical illusions. You look and see an old crone…but keep looking, and it turns into a beautiful young woman. Keep looking beyond that, and you’ll see both images fighting in your brain for supremacy, with no clear winner. Likewise, everything Jimmy does in his elder law posturing seems to occupy a constantly fluctuating, indefinable middle ground.

That’s Jimmy in the old woman’s living room. Sure, she’s the only one who paid him…but she’s also the only one to whom he could offer any value. He wasn’t asked to do much, but he was good at keeping straight what he was asked to do.

That’s Jimmy in the retirement community. Passing out Jell-O cups as a good deed…but they also serve as promotional materials for his services. He’s glad-handing a bunch of helpless senior citizens…but they genuinely seem to enjoy his company, and are appreciative of it.

We get a wonderful, and largely silent, view of how that plays out for Mike after the red-doored Esteem pulls away.

The image flips. It refuses to become one thing or the other for very long. We’re in a state of flux. And it’s fucking fantastic.