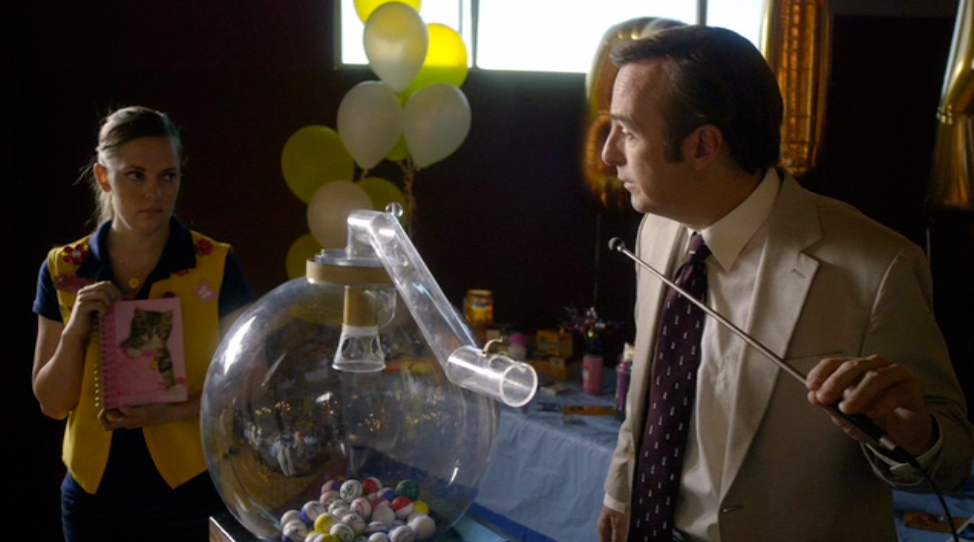 I wondered what it would take to push a man over the line, to stop him saying “Absolutely not” and start him saying “Yes, please.” [This episode] has that answer; you just make “absolutely not” lead, reliably, to tragedy.

That’s from my review of episode three. After this most recent installment, I have to say I think I got it right. “Bingo,” as they say…

At the end of that episode, Jimmy McGill found the Kettlemans camping out. That encounter quite specifically (and quite literally) led to a payoff here. What song was it that the family was singing when he found them? Something about a dog having a name-o? Oh well; it probably doesn’t matter.

Here, Jimmy’s chickens are coming home to roost. From the opening scene — in which his Juan Valdez bump ‘n’ dump last week is less amusing to the police than it was to us — all the way to the very end, this man is facing the consequences of his actions.

Taking money from the Kettlemans was certainly the biggest mistake. While he did attempt to reposition their attempted bribe as a retainer, they refused, and he took the bribe anyway. Bad enough, and the fact that he tried to reposition it as a retainer only becomes another yoke around his neck. He was damned either way, but by attempting to help he ensured that he’d get twice as hurt in return.

The episode’s theme is summed up in the short exchange he has with Mike, when he explains that he’s doing “the right thing,” making damn sure to put it in quotes. And the tragedy is spelled out with two scenes in Jimmy’s could-be office. One of which brims with confidence and the promise of open space…and the other of which sees Jimmy breaking down, a door closing on him.

He was close in “Bingo.” He really thought he had it. With a burgeoning career in elder law — bolstered by a sponsored Bingo night for the local nursing home — he can afford to start thinking about these things. He runs out of room to stash his files. He can turn away clients. He can even steal Kim Wexler away from Hamlin. The way the shot is framed as he introduces her to her new office, we see only blue sky through the window. Nothing appears to be in their way.

Nothing, of course, except for reality. Because Jimmy’s vision of heaven — as modest as it must seem — needs to appear to him only so that it can be snatched away. He needs to believe that he can do this, so that when he actually can’t he will blame himself. He needs to feel in his bones how happy he can be, so that when it’s all ripped away it will hurt like a motherfucker.

The sweetness at the heart of Better Call Saul — at least at this early stage in its life — serves a similar purpose for the audience. The more time we spend with Jimmy, the less he seems like Saul. He has a different name, yes, but he also has a different identity. Try as I might, I can’t picture Saul Goodman giving Kim (or anyone like Kim) a tour of the office the way Jimmy did here. It was adorable, it was naive, and it left Jimmy wide open to a great deal of pain. Saul Goodman knows better, and the further Jimmy McGill drifts from that character, the more it’s bound to hurt when he inevitably snaps back.

Saul, to me, was never a bad man. He was, however, a man hiding a vague unhappiness. There was too much show about the showman. His divorces and troubled upbringing would sometimes come up, but it was mainly a feeling brought about by Bob Odenkirk’s masterful performance. As he demonstrated in Mr. Show, the funniest moments can still carry a note of sadness. Explore it or don’t; either way, it resonates.

With “Bingo,” we catch a glimpse, along with him, of an alternate future. Like Walt and Skyler touring their future home in a Breaking Bad flashback, we know what’s to come. Unlike that, however, we know that this won’t pan out. There’s never going to be a McGill, Wexler & Associates. He’s never going to be able to walk across his spacious suite and ask her where she’d like to go to lunch. They’re never going to work together on the same client.

Everything fragments. He saw how all of the pieces could fit together, but (or perhaps “and”) he failed to see that they never would.

You make a bad decision, and you live with the consequences. You can climb above your station, but you can only fight against gravity for so long.

You end up in a situation that sees you fighting against something you want…forcing it away…beating it back. They call that doing “the right thing.” And, in the process, you lose something else you wanted. Probably what you wanted most of all.

The empty office becomes less of a goal and more of a reminder of what you’ll never have.

“Bingo” introduces us to a Jimmy McGill who comes dangerously close to making something of himself.

Time and fate and consequence will continue to wear that down to nothing. And that’s, quite literally, when there will be no more Jimmy McGill.