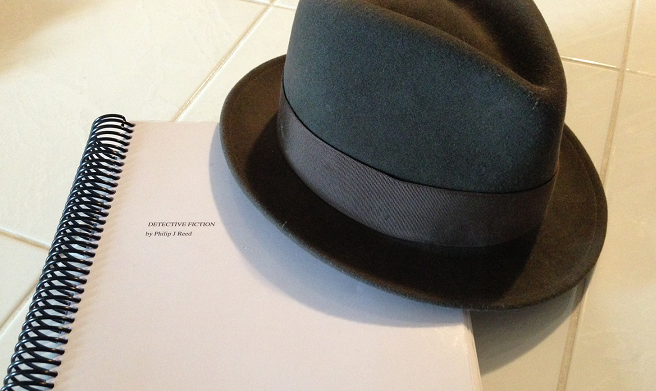 David Bowie died yesterday. I was tempted to write something about his passing, but, ultimately, I decided instead to post something he’d already inspired me to write: a chapter of my still-unpublished novel, Detective Fiction. You can find a little background on the project here, which may help with context. Every sequence in the story was inspired by at least one piece of music, and Chapter Twenty’s flashback to the time Billy Passwater met a girl whose life he is about to ruin — the calm before the calm before the storm — was inspired by one of Bowie’s. I’m posting it now to share with you, if you’d care to read it. And his passing reminded me, and inspired me, to keep writing. I’ve started another project this very evening, and it’s the first fiction I’ve written in over a year. It’s a productive mourning. Thank you, David.

When he heard from Helena that night, he was in his car outside of the Thornweed house where, as ever, nothing was happening, could happen, or was going to happen. He’d given up on reading about Super-Spider’s self-proclaimed “Love Quest” after the hero — his city in villainous chaos around him — spent an entire comic presenting a didactic lesson on Dating Education to the elementary school children.

Dating Education was meant to precede Sexual Education (or so Chester Kenneth Thornweed explained in one of his increasingly intrusive authorial asides, each of which featured illustrations of himself looking suspiciously fit), and it would teach the children the various skills they needed in order to get close to the boys and girls that they liked. Sexual Education was fine, Super-Spider explained, but how was anybody to get to that point in the first place?

Why Super-Spider was so interested in facilitating sexual contact among grade-schoolers was — thankfully — neither questioned nor discussed. Thornweed even inserted a lesson plan that he had drawn up, consisting of activities, projects, and a 50 question multiple-choice exam with the answers at the back of the comic book.

Billy closed the binder and decided to return this issue, and the pile of other issues he hadn’t read yet, to Thornweed in the morning.

When she called him, his feeling was one of relief. There was something refreshing about her, about seeing her name when the phone rang, about hearing her breathe, “Billy, hey!” when he picked up the phone.

Helena Silvering was a flight attendant he had met years ago in Pittsburgh at a crew tavern called The Landing Strip. He saw her across the room, still in her blue uniform. Her reddish brown hair was done up professionally, and she had the round and chubby cheeks of a teenager, which she had been not long before they met. She was presumably in the company of her fellow hosts and hostesses, and Billy was with Caitlin and her brother, downing a few drinks for the ride home, and he was in the process of conjuring up an excuse to drift her way and steer her someplace quieter when he noticed that her lips were moving…but she was not talking; she was singing along to David Bowie’s “Drive-In Saturday,” which had just started playing on the jukebox, and it looked like she was getting the words right as well, so he stood up and, pretenses be damned, decided to speak to her on that account alone.

She stood up to make it easy on him. They met halfway across the room and she presented herself to be held, and they both told each other what a great song it was, and that was all they said until it was over, moving slowly, hazily drunk against each other, and she felt so temperately cold, as she always would when he touched her, as she always would every time he touched her, and there was something about the sincerity of the night, the conditions and the context of the meeting, that made him behave himself. He kept his hands above her waist…and not that far above. He moved in to kiss her, but did not, and she sighed, because she wanted him to move in to kiss her and then not. It was the closeness she wanted, and that much he could give her, and wanted to keep giving her, and would, every so often, when circumstances and schedules aligned, give her again.

He hadn’t seen her since he moved to Florida, though several times she did get the chance to call him from Tampa, where she’d be waiting for some short period for a flight home, or elsewhere, but timing had yet to work out, and they were never able to meet up for drinks or hasty intercourse.

The thoughts of hasty intercourse were relatively distant in his mind when he answered her call. She was a welcome distraction from assassins, from dead dogs, from blown cover and tall, beautiful blondes who hated and distrusted him. From debt (he’d gotten his first balance statement for the car and wasn’t entirely convinced he’d ever see the amount due decrease). From family old and new, from whatever it was that Andrew and Les, independently, might have thought about him now, at this point, and about where he was going. From his future. From Debbie Indemnity and her fat, soft thighs and the shoe he’d sent her home without, the one he found beneath a lawn chair in the living room, which was where it had come off along with her shirt…he put the shoe in his closet in case she called, which he simultaneously hoped she would and wouldn’t. From Thomas St. Quentin, who must have thought that Billy was the biggest ass in town, and yet who kept paying him for reasons Billy could not understand. From Roger Jackchick’s boy, and the future Billy felt at least somewhat responsible for not being able to salvage. From Rebecca, who was going to come down after his birthday in August…who had already bought her ticket…who was as good as here already and her baby who was as good as here already, too. From decisions he did not want to have to make and decisions he did not want to have anybody make for him…from dreams and from nightmares and from people he was starting to realize that he missed and would never see again…

“What are you doing with yourself now?” she asked. “Are you still looking for work?”

“Listen,” Helena said. “I only have a minute, but I wanted to call you, because I’m going to be in Tampa for a few nights this week. And I was wondering if maybe you’d like to get together.”

She cared about him; that was what Billy was reacting to. This was a human being who genuinely wished him to be happy. She cared about him more deeply than any family member he had known, she desired him more strongly than any of the women with whom he had shared beds, back seats and bathroom stalls, and she wanted to be closer to him than any friend he had had in his life. She was a perfect girl with endless patience and freckles on her chubby cheeks and a smile that made him smile, too.

He’d never, ever be able to love her.

On Wednesday the seventh she flew in, and Billy picked her up in the employee parking lot, where she was waiting, out of uniform, with a co-pilot who was still in his.

“Billy!” she said as he approached. For the first time in a month, he left his hat in the car. She threw her arms around him, and Billy couldn’t help but notice how big she had gotten. Not…not fat, exactly…but larger, like her mother. (Whom he’d made sure to identify in photographs.) She’d filled out, and then kept going, and it took him a moment to readjust his expectations for the next few nights. Otherwise, she looked very similar to the girl he remembered, the girl with whom he periodically wondered what his future would have looked like. She was wearing only one earbud, and as she embraced him he heard Pete Townshend singing “You Came Back,” from a mixed CD he had curated for her six years and a thousand miles ago. It made him close his eyes. Maybe she was heavy, now. Maybe it didn’t matter…

The man standing beside her was older than Billy by possibly as many as ten years. He was waiting for Billy to introduce himself, which Billy passively refused to do. There were two men here, right now, and the only pretty girl had chosen him to throw her arms around. He was not about to squander that advantage.

“This is Felix,” Helena said, after a moment. She was still holding Billy’s arm.

Now the man stepped forward, and held out his hand for Billy to shake. Billy took a moment to himself before doing so.

“Co-pilot,” Billy said, nodding. “Got to start somewhere, I guess.”

“If you need anything later,” Felix said to Helena, taking his hand back, “just give me a call. I’m staying in the area.”

“Yeah,” Billy said. Then, to Felix, “Thanks anyway. Good to meet you though.” And he waved the back of his hand at him as he and Helena walked away.

“Helena,” the man said, and Helena told Billy to wait. She went back and spoke to Felix for a moment, and he kept throwing glances that Billy made sure not to look away from. She laughed after a moment, he did not, and she placed a hand on his arm when she finally said goodbye.

“And so it was later,” Billy said as she joined him again. He made sure to look back at Felix, who waved once. Billy turned away. “Have a nice chat?”

“Sorry about that,” she said. “He’s kind of my co-pilot. We fly together a lot, and he gets a little protective.”

“No,” Helena said, leaning her forehead on his shoulder. “He’s actually very nice. I think you two just got off on the wrong foot.”

“I did alright,” Billy said, unlocking his car. “He was just a dick.”

They got into the vehicle, Billy started the engine, and Helena leaned over to kiss him. He held her back for a moment so that he could look into her eyes, and search out that same young girl, the anonymous airhostess in the short blue uniform, underappreciated Bowie lyrics on her lips, and the beat of his band in the tips of her toes. He wanted to see her again, as he saw her then, with his face in her hair and the cool warmth of her neck against him, the smell of daiquiris on her breath, the gentle hum of her breathing, like a soft and constant engine in the distance, speeding a fleet of passengers along into a future they thought — all of them thought — they could comprehend. They’d be wrong. They had to be wrong. Because sometimes the future was the past, and sometimes the future was now, because all he had was now, and days couldn’t last forever, and words couldn’t make wishes come true, as the song went, or basically went, and he pulled her in and he kissed her and he told her that he loved her, because that was what he wanted to believe and because that was what she wanted to hear, and she closed her eyes, and he kept kissing her, and he tasted salt from her quiet tears, and he buried himself in her face and her body and her presence, and shut the world out…the entire world…piece by piece, until there was nothing left.

Only him, and only her.

And in time, he knew, that would be all he needed.