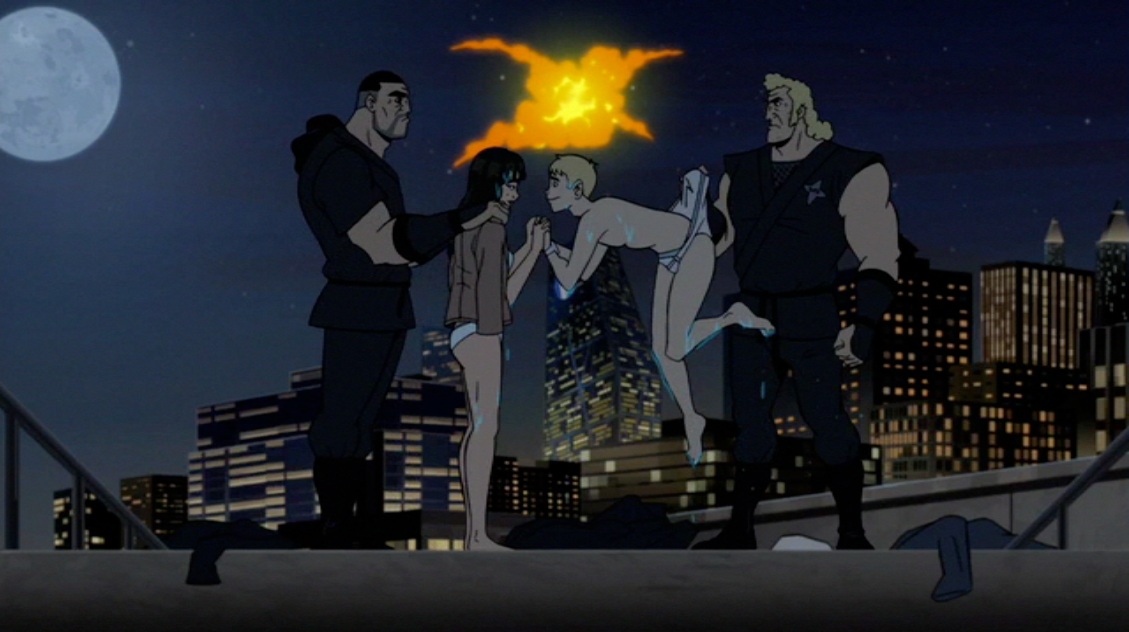 To paraphrase a great pirate captain: “Stop your sourpussin’. You got what you wanted.”

Most of my reviews of season six have had to do with the one-long-story nature of the stretch. Which is to be expected; this stretch really is one long story. But my main complaint was that the absence of isolated episodes — as opposed to chunks of a larger whole — left little room for narrative satisfaction on a weekly basis.

Well, “It Happening One Night” absolutely illustrates how to do this kind of experiment right. While it pushes the larger story along, it also tells a complete tale in itself…something we haven’t seen outside of “Maybe No Go.” (Not coincidentally the season’s other highlight.) I always look forward to great shows making me eat my words, and I more than happily do so now.

Season-long storylines aren’t entirely out of this show’s reach. Most notably season two had an ongoing — and important — story about The Monarch winning back Dr. Girlfriend. More passively season three traced Brock’s growing disillusionment with his lifestyle, culminating in his decision to leave the Venture family. And season four provided a great, quiet opportunity for 21 to find himself and grow as a human being after the death of his closest friend.

We can trust Jackson and Doc, in other words, to tell longform stories. Where season six stumbles is that it doesn’t tell shorter stories along the way, which can make it difficult to stay engaged. We’re being asked, after all, to watch a beginning, a middle, and an end stretched over eight episodes, which means that a lot of what we’re seeing feels like padding.

“It Happening One Night” tells a shorter story along the way. And it does so more naturally than “Maybe No Go” did, as that episode had to section off two characters and follow them in a completely different environment from the main action of the show. In short, this one might turn out to be the season’s best, if only because it’s the moment at which the experiment finally clicks.

Of course, there are still two episodes to go, and there’s no telling how those will pan out. There’s been talk this season that the last episode won’t be a proper finale…in the same way that season five ended with the quiet “The Devil’s Grip” and not the bombastic “All This and Gargantua-2” (which we got much later as a one-off special).

And, yes, that’s disappointing to hear, but it’s possible that the final episode we do get will serve as a nice conclusion, whether or not it actually ties up all of the dangling threads. I mention this because it’s been brought up in the comments a couple of times, but I don’t think that the lack of a “proper finale” means we’ll necessarily be robbed of a satisfying conclusion. At least, that’s what I’m hoping, as this season seems to be mainly “about” whatever it’s building toward, which remains to be revealed.

Anyway, Jeez, I finally get an episode that tells its own story and I’m still talking about the season as a whole.

This week we actually had a credible (well…within the universe of this show) one-off threat, which helps it to stand apart. Yes, prior to this we met Harangutan, but he seemed content to just stand on the sidewalk shouting like a jackass. And last week we had Think Tank, but there was almost nothing to him aside from how quickly he was dispatched. (Battleaxe fared much better as a character, if not as a villain.)

Now we have The Doom Factory, which is basically one big homage to Andy Warhol and his hangers-on, but which manages to feel…unique. It will help “It Happening One Night” (…what’s with that title, by the way?) to be remembered as more than just something that happened. (Happeninged?) The villains were introduced, explored, and dispatched, providing a narrative substance to them that the previous villains of season six haven’t had.

And it was fun. No, Warhol isn’t the most hilarious (or timely, or difficult) target for criticism, but The Doom Factory was really just an identifiable framework for much stronger jokes to live inside. We know Warhol and The Factory (and Empire, and the Campbell’s soup pop-art…) so Jackson and Doc can let our familiarity do the heavy lifting. In other words, they don’t have to spend much time setting up what we’re seeing; they assume we understand the basics, and spend their time harvesting whatever blooms within.

What we ended up with was a humorously elaborate, non-threatening excuse for petty theft, a great spotlight for Dr. Venture as art film subject, and, best of all, The Monarch’s butterfingers bringing the whole organization down.

That, by the way, was the hardest I’ve laughed at season six. It was telegraphed a mile away, but the perfect timing and giddy thrill of it made it work. Believe me, I’m not a comedy snob. (I’m just a general snob.) Easy laughs can still be great laughs. It’s all in the — ahem… — execution.

It even provided the backdrop for a second great moment, as we cut to Hank and Sirena — held apart by their respective bodyguards — and see the explosion hanging in the sky like a firework. A sharp, funny moment gave immediate way to a second bit of sweet, subtle comedy, and I liked that. It was layered in a way that so little of season six seems to be so far, and it provided some nice, sweet resonance to what was, superficially, a cold and callous way of thinning out the show’s cast.

So, yeah, Sirena. I have to admit, I was getting nervous. I’d talked up the potential of Hank’s romantic dabblings in my review of “Faking Miracles”…and then the show did nothing with them. Now that it finally circled back around, I braced myself for disappointment, just in case. That was deeply unnecessary, because I loved everything about this.

Hank is very Hank, which is the best kind of Hank. Without his father or his bodyguard to hold him back — and his most idiotic impulses supported by Dean, Pete, and Billy — he takes Sirena for a night on the town…and wins her over. Not because he knows what he’s doing…but because he doesn’t know what he’s doing.

Hank is gormless. He’s a bit of a nitwit, mindlessly enthusiastic, and arrested in every possible kind of development…but he’s sweet. We as viewers know he’s a knucklehead, but to Sirena — who’s more used to guys who get her drunk and take advantage of her, which she reveals in an unexpectedly stinging moment of real-world darkness — he’s safe. He’s someone who means well, even if he doesn’t have the brains to pull it off effectively. She even invites him to have some fun after dinner, knowing, for once, that she doesn’t need to keep her guard up with this one.

He’s not a great guy. He’s not even selfless guy. But his attempts at misdirection are so obvious and transparent that they actually help her to see who he really is…and that’s what wins her over.

It was sweet, and it built to a beautiful moment of Sirena taking him underwater to escape their chaperones, and sharing her breath with him on the way down.

Yes, it ended with Brock and Rocco holding them apart like children, because that’s okay…they are children. They’re children testing their boundaries…exploring something together…figuring out what it means to feel the way they feel. Hank’s had sex, but he also had his memories erased. Sirena has some level of experience as well, but we are explicitly told that Hank is something new to her.

They both skipped ahead a bit, and now get to step back and experience innocent romance for the first time. They aren’t the children of super villains and super scientists…they’re just children. There’s a kiss, there’s a firework, there’s embarrassment even at the moment of triumph…

And that’s exciting to me as a viewer. The Venture Bros. has always had a core of real humanity beneath the outsized insanity, and it’s nice to see it peek through again here, with two fantastic characters getting to feel, in their own warped, impossible ways, like normal people. (The image of the two being literally held back from what they want was apt, and passively, impressively, intelligently brutal…their entire existences summed up in a single, perfect visual metaphor.)

It was also nice to see Brown Widow getting something to do, as I was a bit puzzled as to why “Hostile Makeover” reintroduced him before sidelining him again. Not that he had great material or anything, but he at least got to play a decent part in the season’s best story. And don’t ask me why I’m wondering this now, but are we going to see Night Dick again? Surely I can’t be the only one who thinks that character was good for something other than a single throwaway joke.

Anyway, two more episodes to go. If season six sticks the landing, that will go a long way toward helping me re-evaluate it later on.

But if it doesn’t? Well, we’re having a lot of fun along the way, and we’ll always have “It Happening One Night” to remind us of what could have been.

6 thoughts on “The Venture Bros. Reviews: “It Happening One Night” (season 6, episode 6)”