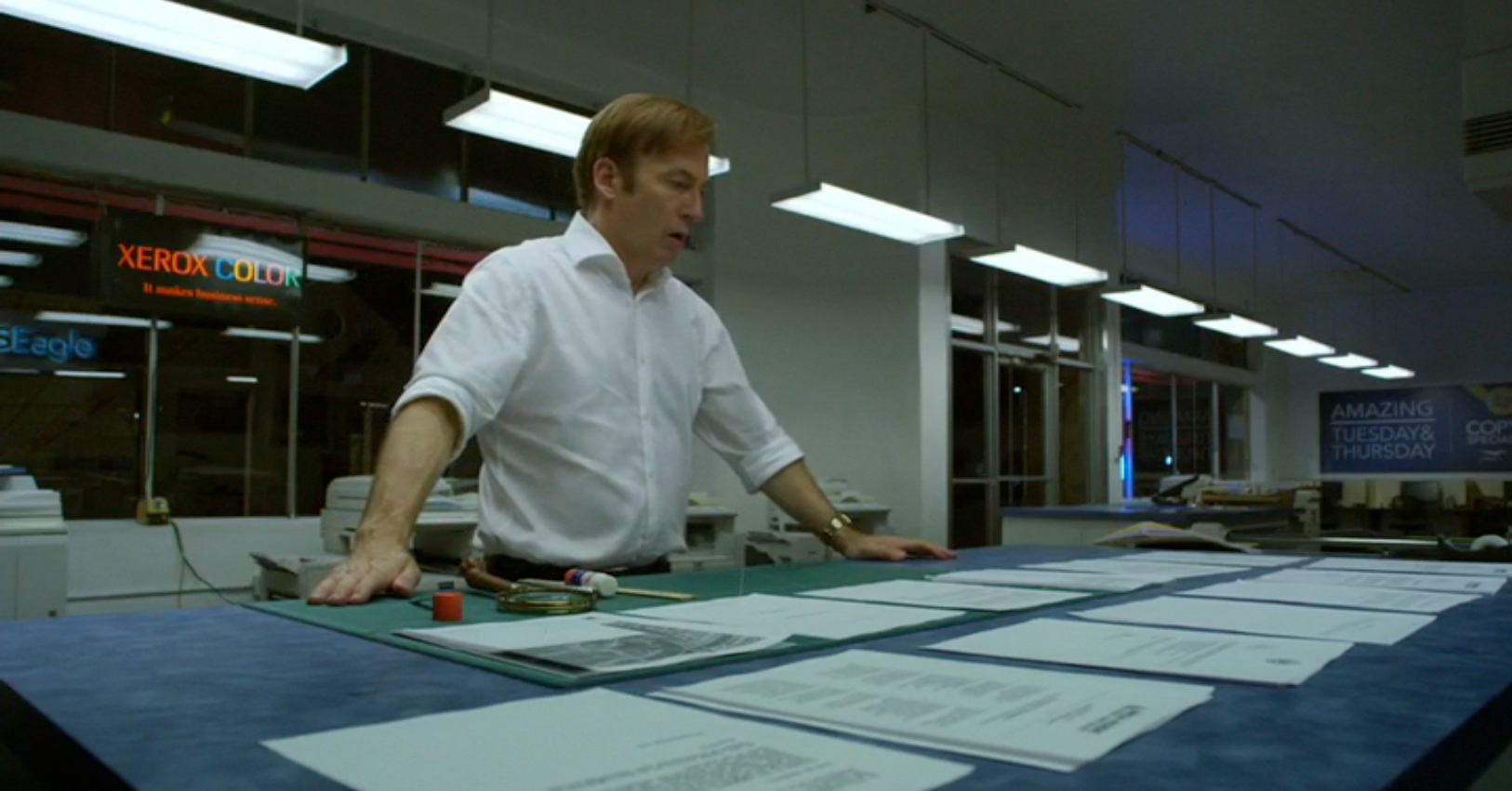 Intentional or not, I’d say that my break from Better Call Saul has helped the reviews. I don’t think I felt like I was tired of the show, or sick of writing about it, or anything like that, but coming back to it after a delay has given me more to talk about. Better ways with which to express my feelings. Larger questions to raise. In short, it turned out to be a good thing, and I believe my past few reviews are superior to the ones that came before.

Now there’s an episode like “Fifi.” And, man…how on Earth to talk about “Fifi”?

Is it interesting? Getting warmer, I guess.

In the review for “Gloves Off” we talked about middle chapters. “Fifi” is another one, but instead of suggesting any forward momentum or decisive character moments, it’s just kind of there.

Frankly, I think “Fifi” is the result of the logistical constraints of serialized drama. When writing a sitcom, for instance, you’ll know that you have, say, 22 episodes to fill. So, of course, you dream up 22 stories to tell. I’m unquestionably simplifying things, but for drop-in/drop-out programming like that, all that really matters is that you’ve hit the requisite number of stories to fill your quota.

Serialized drama is different. Neither Breaking Bad nor Better Call Saul featured self-contained stories to any significant degree. One sitcom story lasts, for the most part, the length of one episode. One Breaking Bad or Better Call Saul story could last a season. Or more. And, hey, now that you mention it, how do we define stories on these shows anyway? Don’t they just sort of continue? Transform or ignite other stories? Resurface when we least expect them?

What I’m getting at here is that the hypothetical Slippin’ Jimmy & Friends sitcom would almost certainly feature entirely self-contained stories on a weekly basis. If it still gets 10 episodes per season, the writers need to write 10 self-contained stories. That’s easy. But writing Better Call Saul forces them to think in season-long arcs…and then where the characters will be left when it’s over, and whether or not that will be fruitful enough for another batch of episodes…and so on and so on. In addition, Better Call Saul has the unenviable task of tying everything eventually back into its parent series.

It’s no longer a 1:1 story:episode ratio. Jimmy McGill is in one place at the start of the season, and the writers want to get him to another place by the end. The episodes themselves, therefore, become steps rather than stories. Jimmy has milestones to hit along the way, and ideally we get some nice character interaction in there…maybe set some time aside to explore larger themes or to let Mike calmly dispense whoop-ass…but the season is the concern, not the individual episodes.

So we get a “Fifi,” now and then. An episode that only barely pushes anything forward. An episode so full of long, wordless stretches (the customs sequence, Mike’s stakeout, Jimmy monkeying around with the Mesa Verde files) that it wears its lack of urgency like a badge.

Reader Stephen Fletcher reminded me of something when I wondered about the significance of Rebecca in the episode that was named after her: he said that the first letter of each episode’s title creates an anagram. By now, I don’t think it’s worth redacting the spoiler; it spells FRING’S BACK. So that’s why that episode had to be named after Rebecca; we needed the R. Personally I think they could have called it “Regret” or “Reconsideration” or “Reprisal” or something that had a bit more to do with anything that happened in the episode, but so be it.

“Fifi” by that same logic might as well be called “Filler.”

But, hey, it’s not without merit. Better Call Saul has one of the wall-to-wall best casts on television right now, and it’s a pleasure to watch them go about their business, even if that business seems relatively light.

This time around, we even get to see another side of Chuck: we get to see him being an actual lawyer. His salvaging of the Mesa Verde account was both impressive and unexpected, and we get a sense of just why he’s still valuable to Hamlin, Hamlin & McGill, despite his reclusive lifestyle. (We also get yet another indication that his “sickness” is all in his mind, as he’s able to make it through a long, important meeting with aplomb and only begins to falter once the client leaves.)

That much was nice. Even if he was single-handedly crippling Jimmy’s and Kim’s prospects as solo practitioners.

Yeah, if “Fifi” tugs any of the narrative threads along, it’s that one, forcing us to experience Kim’s emotional roller coaster right alongside her. She’s throwing her lot in with Jimmy, she retains Mesa Verda, she loses Mesa Verde. Apprehensive, empowered, crushed. It’s a nice little journey for the character, and part of me wishes it were joined to a more gripping episode in general.

We’re left knowing almost nothing more than we knew at the end of last week, as well. Wexler & McGill is still a blank slate.

Then there’s Mike, whose story barely advances…but does advance just enough to prove me wrong yet again. First I thought Hector might want to use Mike for muscle in the future. Then I thought Mike might be heading back to Hector to ask for more work. Now…who knows. Mike scopes out Hector’s operations and…that’s about it. It was a bit odd that he let Kaylee help him build whatever monstrous device he was working on in his kitchen, as I’d honestly think he’d want his granddaughter to have no part in his dealings whatsoever, but, again, that’s what you get from an episode like “Fifi.” It needs to tread water, and that’s what it forces the characters to do as well.

I’m also not sure what Jimmy was doing toward the end with the Mesa Verde files. He obviously switched an address on a few of the documents, but I’m not sure what his aim is. Is he trying to make Chuck look incompetent or something? Surely if Chuck fucks up an address he’ll be corrected, and then that’s that. Worst case scenario is that he compares his copies of the files to some other records and ascertains immediately that Jimmy meddled. I’m sure I’m wrong, but as of right now I have no clue how this is meant to impact Chuck at all. “Fifi” sure seems to think it’s important…I just wish it gave me reason enough to join it.

And, hey, as long as we’re wallowing in confusion…that customs sequence at the beginning. Was that a nod to the opening of Breaking Bad‘s “Kafkaesque,” when we see the Los Pollos Hermanos trucks transporting illicit substances along with their expected cargo? I assume so, but “Fifi” doesn’t tell us the significance of anything — almost literally anything — it shows us. It wasn’t a Los Pollos Hermanos truck, obviously, but I’m wondering if it ties into Fring’s return in any way, or if it’s just a neat, time-killing callback.

It would be nice if “Fifi” answered some questions, as I think it needed to be a far more engaging episode than it is.

But we still have two chapters left to go. It’s possible that “Fifi” set them up for a grand slam.