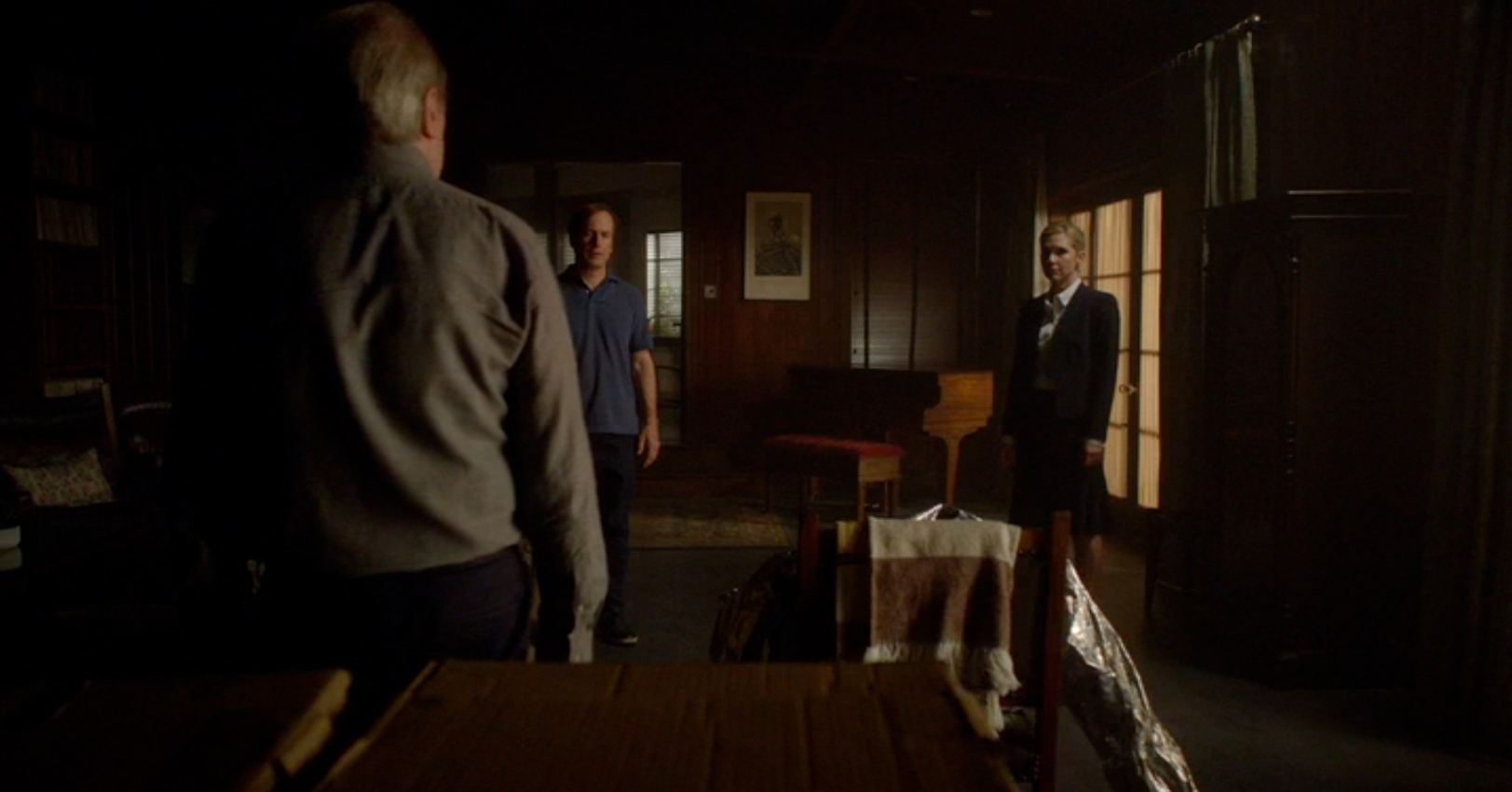 I’ll stand by my comments about the previous episode, but I think it’s only fair to say that “Nailed” absolutely pays off “Fifi” to a degree I never anticipated. This is one of the best episodes the show has done, and the fact that it comes on the heels of one of the weaker chapters goes a long way toward justifying my faith in Better Call Saul.

Sometimes, sure, things seem to go off the rails a bit. But stick with it, and you’ll be rewarded.

Also reassuring is the way in which Jimmy’s plot and Mike’s plot comment thematically upon each other. Sure, they’re still conflicting protagonists in unrelated stories, but “Nailed” sees each of them going out of their way to interfere with somebody else’s business, turning an easy success for their rival into a failure, and claiming it for themselves.

In each case they’re even caught…except that there’s no evidence. Nothing can be proven. They’re guilty and everyone knows they’re guilty…but without proof, they get away with it.

In each case, there’s a price.

Mike learns that although his robbery of Hector’s driver netted him a quarter of a million dollars, it also resulted in an innocent death. While Mike hogtied the driver and got the loot without injuring anybody, Hector killed the “good Samaritan” who found the driver and freed him. No hard feelings…just couldn’t leave any witnesses. And, suddenly, Mike’s heist isn’t as clean as it should have been. He didn’t anticipate that consequence. A man doesn’t get to go home tonight…because of him.

And Jimmy…well…what does Jimmy learn? Almost nothing, aside from the fact that Chuck is a more tenacious adversary than he would have guessed. But he still pays a price…as he sees his brother become overwhelmed in the all-night copyshop and collapse…scoring himself what looks like a pretty awful headwound on the way down. He didn’t anticipate that consequence. His brother doesn’t get to go home tonight…because of him.

We’re getting ahead of ourselves a little bit, maybe, but so much of “Nailed” comes down to its ending. (Or endings.) Like the great Breaking Bad episode “Dead Freight,” it’s not what happens during the story that matters. It’s what happens at the end, and how that recontextualizes what we’ve seen, and makes us question the value and wisdom of the choices that led the characters to that terminal tragedy.

In fact, I was actually reflecting a few days ago on how non-violent Better Call Saul is. For all of its resurrections of gangland characters we remember from Breaking Bad, we don’t get the weekly surges of violence. Of harrowing threats. Of the unexpected deaths of those we probably, at some point, assumed would be safe.

Better Call Saul has its moments of physical danger (“Mijo”) and outright battery (“Gloves Off”), but its tension comes primarily from something else. It comes from the tormented relationship between two brothers who love each other and yet would be slightly relieved if they found out the other had died peacefully in the night. It comes from Jimmy and Kim, and their extremely realistic, inevitably doomed feelings for each other. It comes from a natural con-man’s struggle to find a more professional, more respectful way forward.

In short, it comes from the characters. And, yes, I know, every human being who loves Breaking Bad can speak for hours on end about the development and exploration of its characters. Rightly so. But Breaking Bad also had a violent streak that kept its episodes thrilling. Sometimes disturbingly so. Yes, we wanted to see Walt and Jesse explore their relationship, but weren’t we also tuning in to see if either of them would make it out alive? Yes, we all adored Gus Fring and enjoyed spending time watching Giancarlo Esposito inhabit the character, but weren’t we also tuning in to see how our heroes would finally get him out of the way? Yes, we invested ourselves in the narrative spiral of a desperate man discovering that, at heart, he might be a villain…but if he retired from the drug trade three seasons from the show’s end and successfully cut all of those toxic associates out of his life, would we have kept watching?

What I’m trying to say is that the characters made Breaking Bad as great as it was, but they aren’t what made Breaking Bad. They are, by contrast, what makes Better Call Saul, which is why tonight’s brutal ending hits as hard as it does.

In Breaking Bad, a man hitting his head wouldn’t even register. (Unless it’s Ted…but I can’t imagine Chuck suffered a trauma as serious as that.) In Better Call Saul it’s enough to make you have to catch your breath. It’s terrifying.

And yet it wasn’t intentional violence.

There’s no threat of further violence to come.

It was just Chuck. Poor, conflicted, flustered Chuck…overwhelmed and frustrated by his brother’s treachery. Just Chuck. Chuck, who can’t take it anymore. And who is so overcome with anxiety that his knees buckle beneath him.

And he hits his head.

And it’s one of the most painful things I’ve ever seen on television.

It was brilliant, and it justified last week’s non-story entirely. Of course, I always have to complain about something, so I’ll just say that I do still feel that Jimmy’s alteration of the documents was a bit of a cheat. Yes, it halted the Mesa Verde proceedings and brought the client right back into Kim’s lap, but how did Jimmy know that would happen? Last week I figured the meddling would be spotted quickly (as it was) and dismissed as a clerical error (which it also was). The fact that it bumped Mesa Verde’s expansion back six weeks or so is fortunate for Jimmy, but it can’t have been something he should have banked on. It feels like a lucky break, and that was a lot of work for him to go through in the hopes that he might get lucky with the court being unable to grant the corrected request for expansion later the same day. Or the next day. Or even a few days later.

His gambit paid off, but I still don’t buy that it was a done deal the way Jimmy seemed to assume it would be a done deal.

Again, though, it led to “Nailed,” and that’s the important thing. Because “Nailed” had a great ending. And probably an even better middle…with a scene that was even more painful to watch than Chuck’s head injury.

It’s when Jimmy and Kim show up to Chuck’s house to pick up the Mesa Verde files. And Chuck tells Kim everything.

He figured it out. He knows exactly what Jimmy did, he knows when Jimmy did it, and he knows how Jimmy did it. He tells Kim every detail. And we know he’s right, because we watched it happen.

He lays it out for Kim. She listens. He interrupts Jimmy when he tries to deflect. He tells Kim exactly how dangerous a person Jimmy McGill is.

And after all that, after a long, dark, perfectly tense, impeccably acted, powerfully scripted scene like that…she dismisses him.

She tells Chuck he made a mistake and Jimmy had nothing to do with it. What’s more, she turns all of his disparaging remarks about Jimmy’s character back on him. Sure, Jimmy might be a conniving scumbag. But isn’t it Chuck who pressed him into that corner in the first place?

I actually made a few involuntary noises (which it’d be embarrassing to recount here) when she pushed back against Chuck. I was conflicted, and the show had done that to me masterfully. Chuck was right…but didn’t it feel good to see Kim lay into him? And the fact that she did so after Chuck made it clear that Jimmy did this as some kind of warped romantic gesture made it both more exciting and more heartbreaking. She was coming to Jimmy’s aid at precisely the wrong time. She was fighting for his innocence now that he was clearly, unquestionably guilty. She was acting as a character witness for the wrong McGill.

Then, of course, they get in the car and Kim punches Jimmy in the arm repeatedly. She didn’t believe Chuck at all.

Of course she wanted to.

Why wouldn’t she want to?

But she didn’t. She knows better.

And on some level, against her better judgment, against the judgment of those she respects and admires, against her memories of how he’s held her back in the past, against all of the things she’s already witnessed him do…

Kim loves him. I really believe that.

And I’d go to bat for Better Call Saul as having one of the most believably disarming love stories in TV history.

That’s what makes this such an effective show, at its core. And such a tragic one.

On Breaking Bad we always wondered who would die next. On Better Call Saul, we just follow this singular, sad, doomed relationship downward, toward its inevitable, unfortunate end.

In many ways, that’s actually scarier.