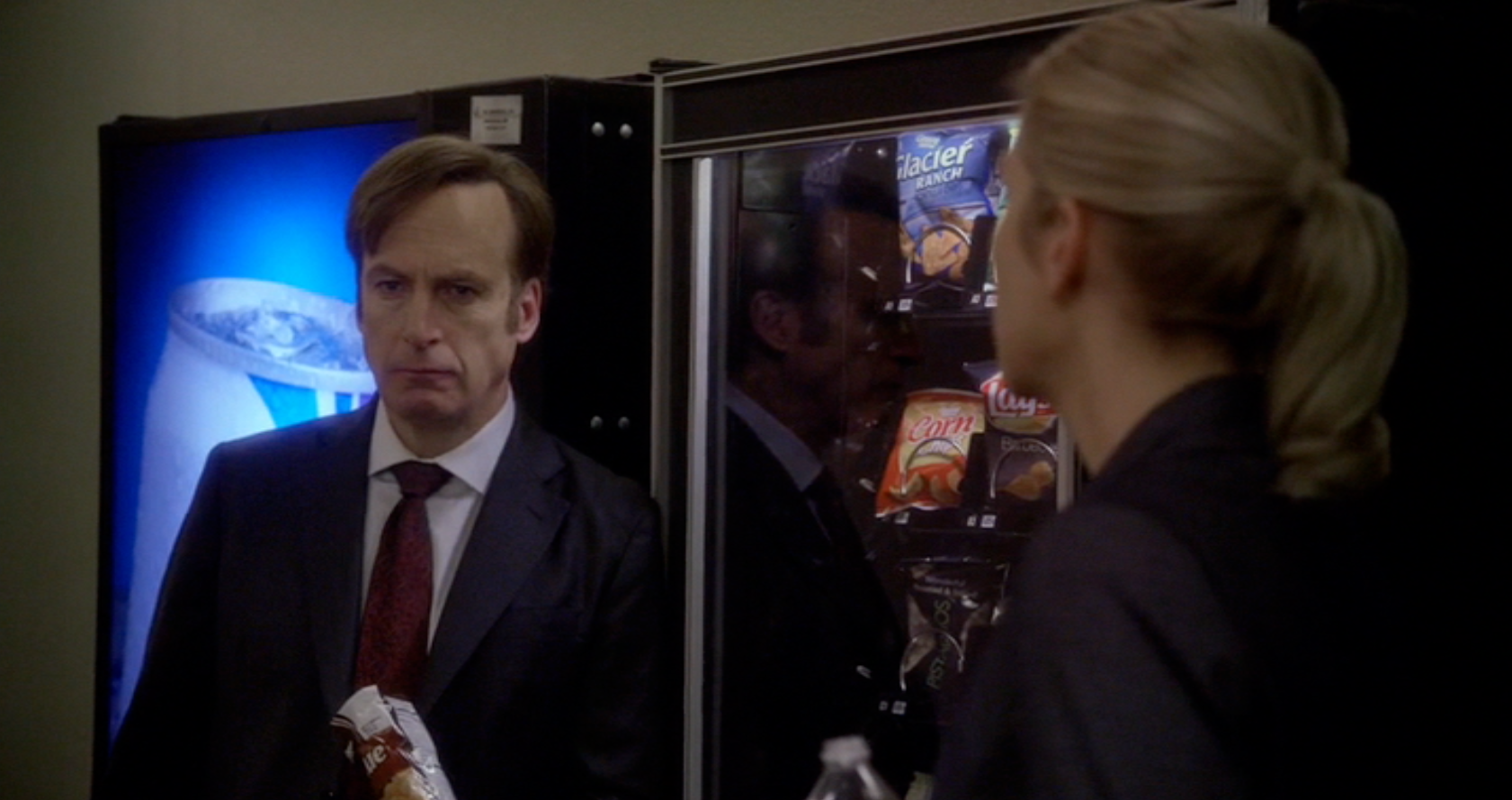 There’s always been a balance between the two shows, facilitated mainly by the parallel protagonists. When we’re with Mike, this show feels like its predecessor. When we’re with Jimmy, this show feels like its own beast. And as much as I love Mike, I think it’s safe to say that anyone reading these reviews knows by now that I prefer the time we spend with Jimmy. And watching “Chicanery” — a rare hour without any appearance from Mike at all — I didn’t miss Mike one bit.

Better Call Saul is always at its best when it’s charting Jimmy’s journey. When it’s mapping his transition from flawed attorney with a big heart to rampant shyster. When it’s peeling back the cartoon glossiness of Saul Goodman and revealing the hurting, caring, nearly respectable human being within.

“He has a way of doing the worst things for reasons that sound almost noble,” Chuck says of him this week. And that’s a crucial difference between the character we know in this show and the one we knew in Breaking Bad. We liked Saul, of course, but at no point — for no duration — did he ever seem noble.

So somewhere between this point in his life and that one, the bottom falls out. Jimmy doesn’t just change his name…he loses his humanity. He’s drained of his blood. And we likely see the pivot point for that in this episode, when he has his own blood on the witness stand in the form of his older brother…and breaks him.

It’s a difficult thing to pull off, but “Chicanery” handles it extraordinarily well. We know Jimmy is the one who is lying. We know that each time he lies, Chuck’s concerns about him practicing law — something the elder McGill holds sacred — are revealed to be better and more solidly founded. We know that Jimmy is manipulating circumstances not only to clear his name, but to destroy his brother’s.

And yet, I think we still side with Jimmy.

I think we still care the most about Jimmy.

I think we still want the best for Jimmy.

Chuck is somehow both the victim and the villain in this episode. I think it works, but I’d be interested in hearing from someone who thinks it doesn’t. Mainly I think it works because we conclusively reveal Chuck’s condition to be a sham. (Not a deliberate sham, but a sham nonetheless.) We feel cheated by him just as much as Jimmy should. We’ve had indications before — often very strong ones — that his allergy to electricity was all in his mind. We knew that. But somehow, exposing it so definitively, leaving him nowhere to run, allows us to react as though we’ve been taken in.

Chuck took advantage of his brother’s patience, love, and hospitality. And since it’s his brother with whom we are aligned, that’s all we need to know in order to see Chuck as the bad guy.

There’s no further question (your honor); Chuck is mentally ill.

And, funnily enough, his extended outburst after finding the battery in his pocket could potentially get him disbarred for not being in command of his faculties. That would be an interesting karmic twist on the disbarment proceedings against Jimmy.

But I’m jumping ahead. “Chicanery” is one of the best episodes of this show we’ve had yet, and maybe the one most worthy of calling itself Better Call Saul. It deals almost entirely with characters and relationships unique to this show, and it dissects one of its most important dynamics (Jimmy and Chuck) while quietly, passively providing room for the other (Jimmy and Kim) to grow.

It’s also a bottle episode, taking place almost entirely within a single room. And it’s perfectly positioned, depositing us directly in the middle of the season with the question of where these characters will choose to go next. Chuck and Jimmy are at obvious turning points, and Kim’s willingness to play dirty suggests that she might be as well. Not to mention the possibility of Howard canning Chuck to avoid a foreshadowed reputational crisis.

What’s more, it single-handedly proves that Better Call Saul is finally at the point where it can start reflecting itself, as opposed to reflecting what we remember from Breaking Bad. The opening sequence alone is reminiscent of the candle-lit dinner in last season’s “Rebecca,” and Chuck even invents a lie about the power company transposing the numbers in his address…which is importantly similar to the crime Jimmy committed in “Fifi.”

It’s nice and refreshing that I’m able to watch an episode of this show and see echoes of Better Call Saul rather than characters and imagery and musical cues from Breaking Bad. Ironically, the closer this show draws to its parent series in time, the more opportunity it has to become something completely different.

And, yes, speaking of Breaking Bad, Huell’s back! I posited a couple of weeks ago that we must be close to seeing him again, and I honestly didn’t expect to be right. I thought it was wishful thinking at best, but, hey, here we are, with the big man demonstrating his nimble fingers for the chronological first time.

I don’t have much specifically to say about “Chicanery,” possibly because it leaves me with so little room for criticism. Everything I’ve been wanting Better Call Saul to do all along, it does here. And it does it flawlessly. For an episode that’s essentially one long, moderated conversation, it’s incredibly gripping, tense, and heartbreaking.

It’s everything I’ve been wanting to see, in a way I never imagined seeing it. It’s an episode that reassures me that, yes, Better Call Saul deserves to exist on its own merits, for its own reasons, in its own ways.

It’s insightful, offering important glimpses of who these characters really are, and I think anyone watching came away with at least a slightly evolved perspective of one of them. For me, the biggest insight came from Chuck, who praised the importance and significance of law as something that ensures that everyone, no matter who they are, will face consequences for their actions.

He doesn’t see law as sacred because it protects people, or because it ensures that everyone will be treated fairly. He views it through a punitive lens. And, certainly, compared to that, Jimmy’s actions do seem almost noble…

I’m excited for next week, but that’s nothing new. Maybe what’s new is that I feel excited for Better Call Saul‘s willingness to offer an experience that we simply couldn’t have had on Breaking Bad.

And that’s the biggest compliment anyone can pay Better Call Saul.