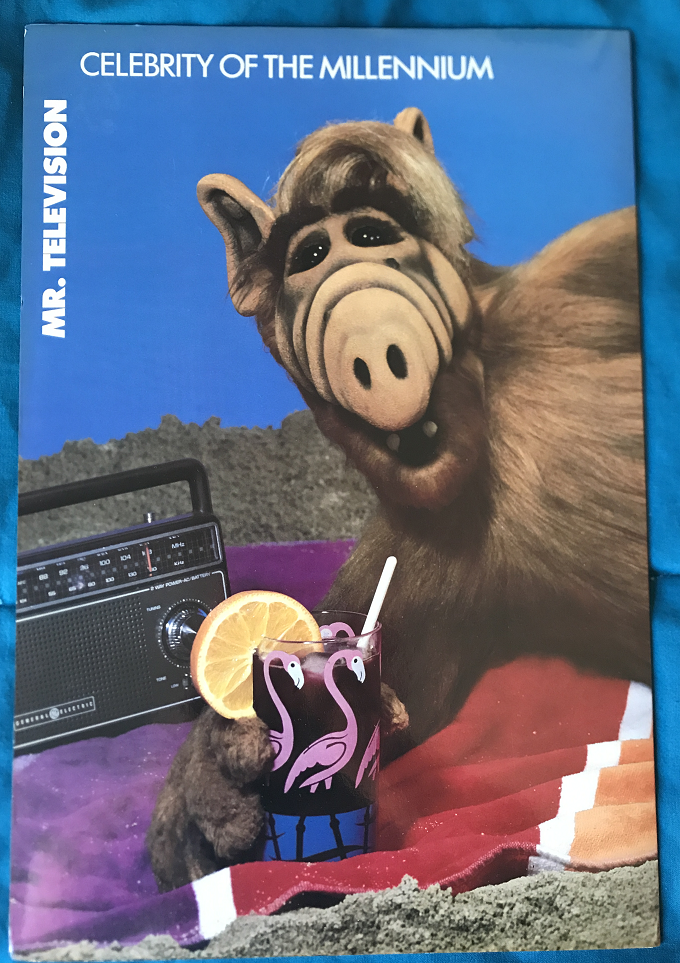 Yeah, I know, my post title sucks, but I don’t really have a running feature on the blog I can tie this to. It’s just a piece of pretty cool television history that I can’t find anywhere on the internet. For all I know, I have the last surviving copy and am therefore morally obligated to drop it into a volcano.

But, what the hell, I’ll archive it for future generations instead.

I saw this at a convention, and Casey Roberson was nice/vindictive enough to buy it for me. The vendor described it as a piece of promotional material sent to networks to see if they wanted to air ALF. He wasn’t wrong, but I assumed he meant for its initial run. Instead this was distributed in 1989, toward the end of the show’s run, promoting the availability (starting fall of 1990) of ALF for strip syndication.

Strip syndication refers to a show’s reruns airing at a fixed time across the entire week, thereby showing up as a long “strip” when laid out on a TV schedule.

Of course that also means the trifold gets to play into the naughty definition of “strip” and present ALF as a Playmate centerfold. This means I own the only official piece of ALF pornography ever produced.

Now you see why I’m bothering to archive it!

Anyway, I’m including pictures, but since I just have an iPhone I’ll also transcribe the text. I intend to be as accurate as possible, right down to any typos or punctuation issues. Feel free to point out any you see in my transcription, though, just in case they’re my own.

I have seen some of the details here in other places (such as ALF’s favorite Melmacian TV shows) but since I can’t find a copy of this anywhere, I assume there was just some overlap with copy found in other materials.

Interestingly, but not surprisingly, the Tanners aren’t mentioned here at all. This is trying to sell a show without even paying lipservice to four of the five main characters.

The only text is “CELEBRITY OF THE MILLENNIUM” and “MR. TELEVISION.”

There’s also a “Love, ALF” signature. Thanks to this and the next page, we have the best look at his handwriting we could ever want. Analyze away, graphologists!

Yes, I know the copyright notice says 1987 and I said it was circulated in 1989, but you’ll see where I got that date later. This must just be the copyright date for the image, as the text is clearly selling the show for syndication in 1990, which is not something they would have been doing in 1987. The text, therefore, may not be copyrighted at all, so feel free to use it to advertise your own show about a farting puppet. 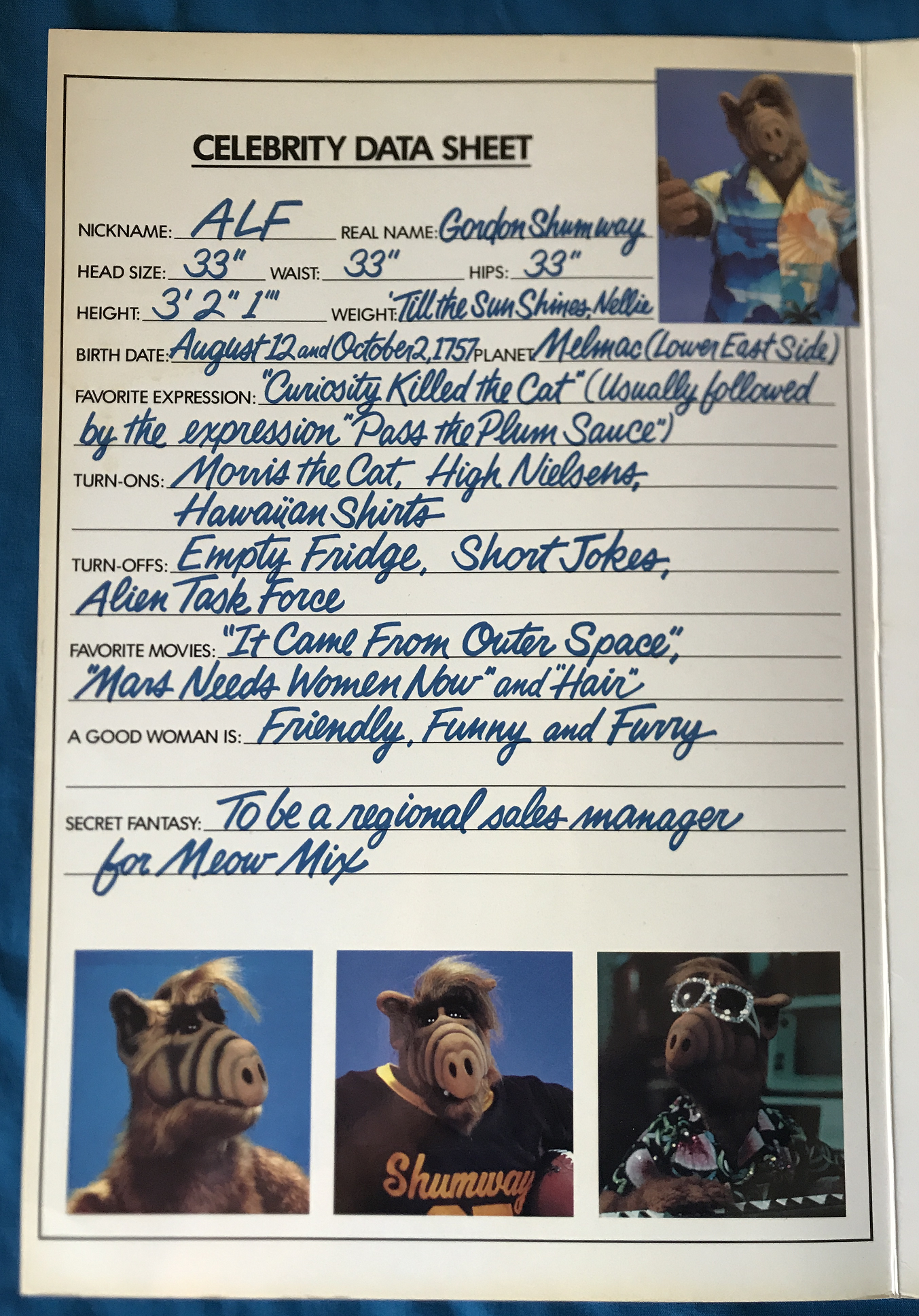 This page features three promotional photos of ALF and one from “Don’t it Make Your Brown Eyes Blue?” where he’s dressed as legendary womanizer Elton John. We also get some definitive MELMAC FACTS regarding his birthday, but I don’t get whatever joke they’re trying to tell by giving him two of them. Then there’s the insight nobody expected that he wants to fuck the cat from the 9Lives cans. (And, I guess, Mr. Ochmonek.) 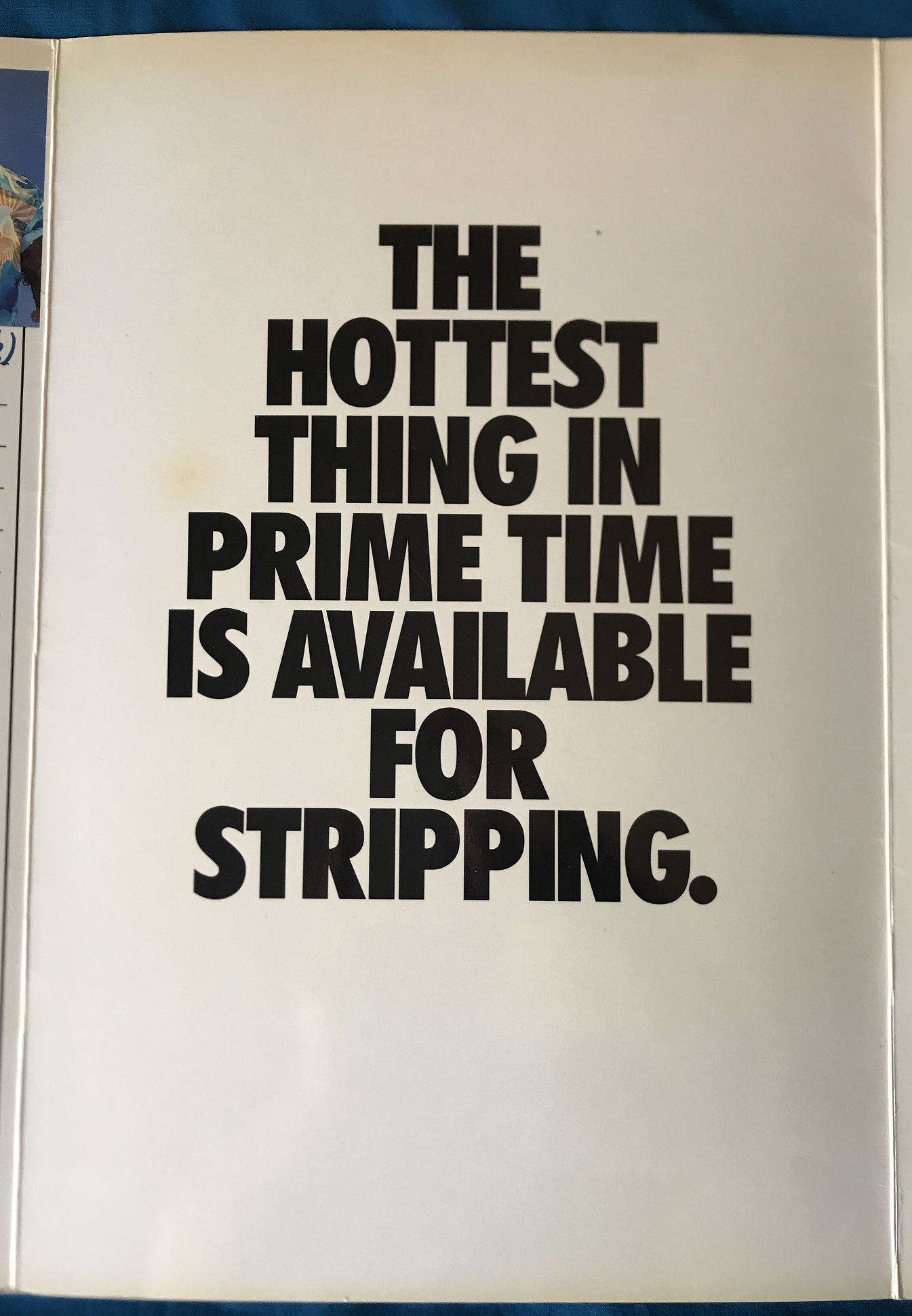 THE HOTTEST THING IN PRIME TIME IS AVAILABLE FOR STRIPPING. 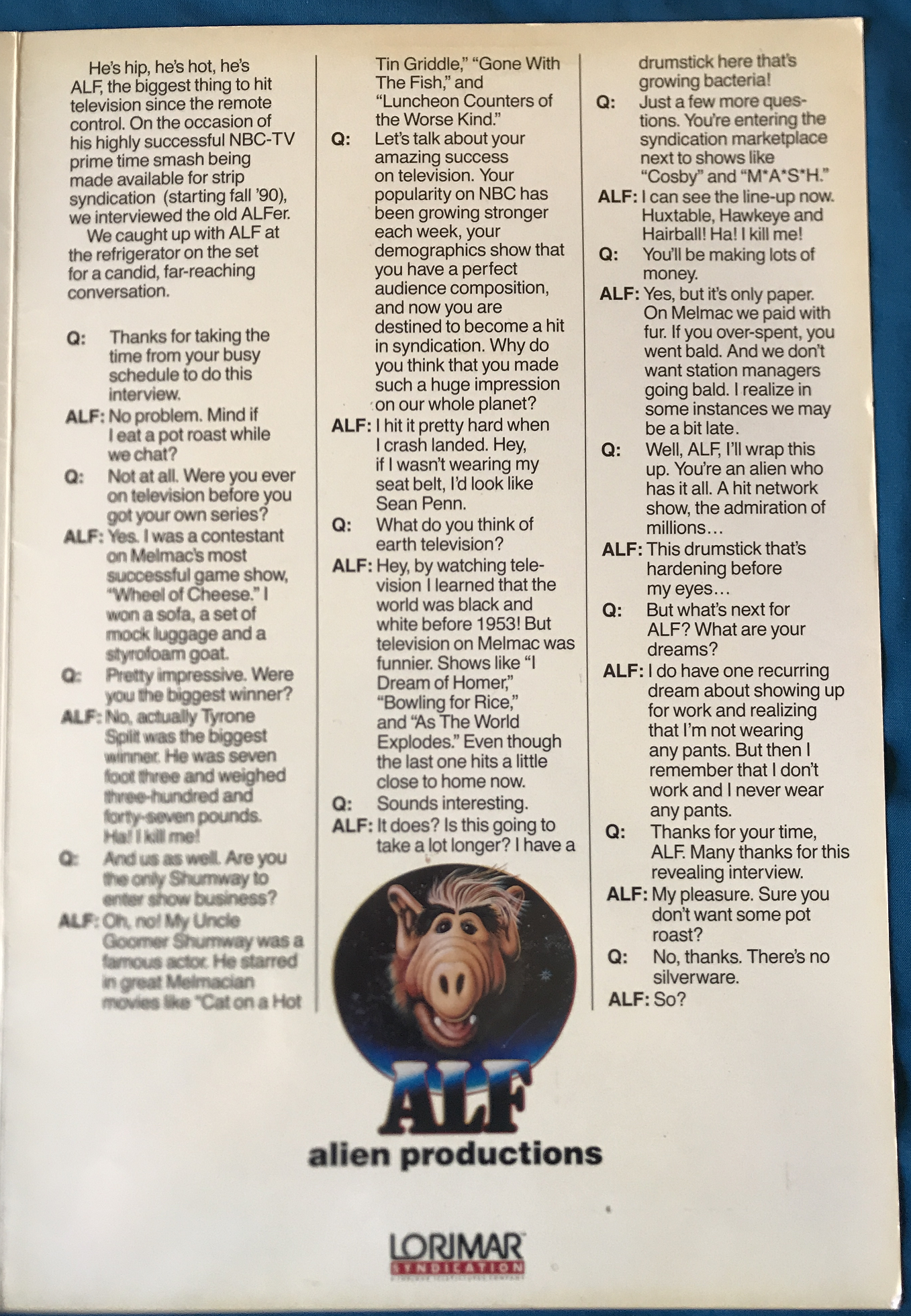 He’s hip, he’s hot, he’s ALF, the biggest thing to hit television since the remote control. On the occasion of his highly successful NBC-TV prime time smash being made available for strip syndication (starting fall ’90), we interviewed the old ALFer.

We caught up with ALF at the refrigerator on the set for a candid, far-reaching conversation.

Q: Thanks for taking the time from your busy schedule to do this interview.
ALF: No problem. Mind if I eat a pot roast while we chat?
Q: Not at all. Were you ever on television before you got your own series?
ALF: Yes. I was a contestant on Melmac’s most successful game show, “Wheel of Cheese.” I won a sofa, a set of mock luggage and a styrofoam goat.
Q: Pretty impressive. Were you the biggest winner?
ALF: No, actually Tyrone Split was the biggest winner. He was seven foot three and weighed three-hundred and forty-seven pounds. Ha! I kill me!
Q: And us as well. Are you the only Shumway to enter show business?
ALF: Oh, no! My Uncle Goomer Shumway was a famous actor. He starred in great Melmacian movies like “Cat on a Hot Tin Griddle,” “Gone With the Fish,” and “Luncheon Counters of the Worse Kind.”
Q: Let’s talk about your amazing success on television. Your popularity on NBC has been growing stronger each week, your demographics show that you have a perfect audience composition, and now you are destined to become a hit in syndication. Why do you think that you made such a huge impression on our whole planet?
ALF: I hit it pretty hard when I crash landed. Hey, if I wasn’t wearing my seat belt, I’d look like Sean Penn.
Q: What do you think of earth television?
ALF: Hey, by watching television I learned that the world was black and white before 1953! But television on Melmac was funnier. Shows like “I Dream of Homer,” “Bowling for Rice,” and “As The World Explodes.” Even though the last one hits a little close to home now.
Q: Sounds interesting.
ALF: It does? Is this going to take a lot longer? I have a drumstick here that’s growing bacteria!
Q: Just a few more questions. You’re entering the syndication marketplace next to shows like “Cosby” and “M*A*S*H.”
ALF: I can see the line-up now. Huxtable, Hawkeye and Hairball! Ha! I kill me!
Q: You’ll be making lots of money.
ALF: Yes, but it’s only paper. On Melmac we paid with fur. If you over-spent, you went bald. And we don’t want station managers going bald. I realize in some instances we may be a bit late.
Q: Well, ALF, I’ll wrap this up. You’re an alien who has it all. A hit network show, the admiration of millions…
ALF: This drumstick that’s hardening before my eyes…
Q: But what’s next for ALF? What are your dreams?
ALF: I do have one recurring dream about showing up for work and realizing that I’m not wearing any pants. But then I remeber that I don’t work and I never wear any pants.
Q: Thanks for your time, ALF. Many thanks for this revealing interview.
ALF: My pleasure. Sure you don’t want some pot roast?
Q: No, thanks. There’s no silverware.
ALF: So?

So, yeah, there you go! It’s actually pretty cool. It was wrapped in plastic when we bought it, so I didn’t get a good look at it until later. The Playboy similarities are pretty tame, and it’s nothing a child would recognize, so I can imagine this was a really nice take-home for station managers whose kids loved the show. It’s a cool bit of very rare memorabilia, and if I had gotten my hands on it as a kid I would have thought it was great.

Does anyone else know more about this? I wonder what other bits of ALF ephemera are lost to the ages.

It’s laminated like a restaurant menu, which means it’s stayed in pretty good shape through the years, and I’m both happy to have it and thrilled that I get to be the one to preserve it online. Mainly, though, I hope you are as upset as I am that this is the third different “here’s what Melmacians used for currency” joke. Whoever wrote this should be FIRED FROM ALF.

3 thoughts on “Check out this ALF syndication trifold!”