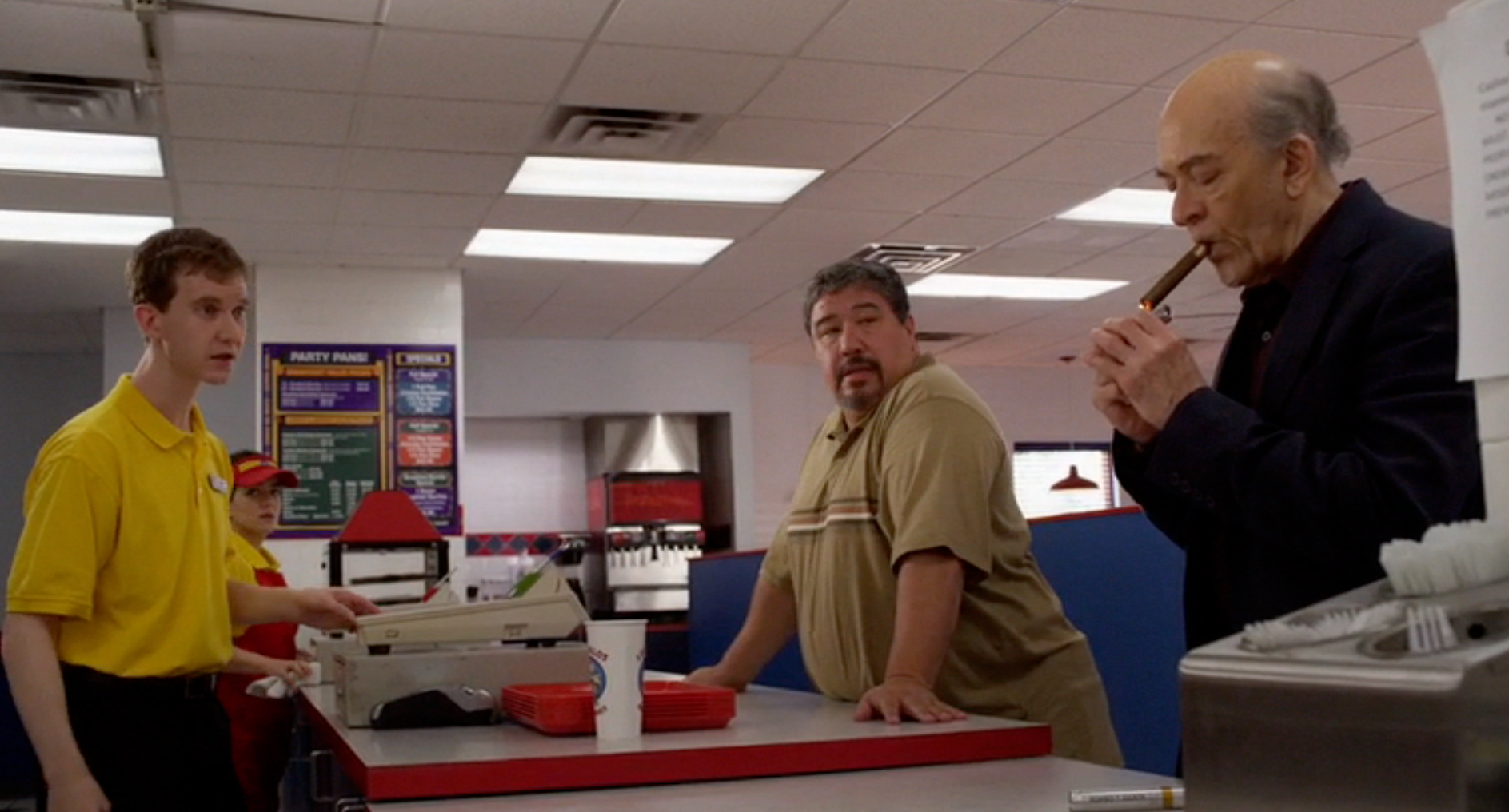 Before I got to watch this episode, I saw somebody say that “Sabrosito” felt a lot like Breaking Bad. That didn’t spoil anything, of course, but I knew exactly what must have been meant by that: there’d be a lot of Mike.

That’s interesting to me. As many characters from that legendary show pop up in this one (“Sabrosito” adds Don Eladio to the list), it’s only Mike that feels the same. In some cases that’s clearly by design. Jimmy — the other main Breaking Bad character — is at an entirely different phase of his life. We may see him act like Saul Goodman now and then, but he’s still James Morgan McGill. He pursuing different things than Saul was, in different ways. He has different ways of approaching his problems. His station is almost entirely distinct from the one in which we find him during Breaking Bad.

But Mike is Mike. He loves his granddaughter, he’s willing to get his hands dirty, he has an identifiable personal morality, and he has a preternatural gift for Getting Shit Done. He is the character we remember from that other show, with the only differences between incarnations being superficial.

Jimmy needs to become someone else. Literally. Mike just needs to shake someone’s hand and make it official.

We’ll talk about Jimmy more next week, but for now I want to make a point: Mike is no longer the one character that makes the show feel like Breaking Bad. Now we have Gus Fring.

I’m okay with this, but I’m also a little surprised. In the media runup to season three, I read an interview with Giancarlo Esposito, who plays the character. I don’t remember much — I may have skimmed to avoid spoiling things — but I do recall him saying that the Gus we meet in Better Call Saul isn’t quite the one we knew in Breaking Bad. I’m necessarily paraphrasing, but the sentiment seemed to be “Gus is still getting the hang of things, growing into the character we remember.”

Now, a few episodes into his life on Better Call Saul, I don’t buy that one bit. Either Esposito is trying to convey that on screen and failing, or…well, I don’t know what the alternative is. But whatever the alternative is, that’s what I’m betting.

Gus is already Gus. Not precisely the same Gus but, again, the difference is the same as it was for Mike: superficial. He’s everything we remember in broad strokes, and we just need to sync up a few details.

Jimmy is a completely different character…as is Hector. Those two appear here in distinct, unique incarnations. Those two each face a journey — clearly tragic — that will eventually deposit them where we remember them being. Mike and Gus are just killing time.

I’m not complaining…I’m just thinking out loud. As this show and Breaking Bad pull closer together on the highway, it’s tempting to compare them more directly, and to think of what happens here not as events unique to this show, but as ones that lay groundwork for the other.

And I’m still kind of disappointed by that. Better Call Saul doesn’t deserve to live in the shadow of Breaking Bad, but it so frequently seems to want to. It’ll carve out an identify for itself here and there, when it can do so without stepping on the other show’s toes. And, frankly, I don’t think that should be its consideration. It can be fun when Breaking Bad characters swing by to say hello, but lately it feels as though the space occupied solely by Better Call Saul is getting thinner and thinner. We aren’t winking at the parent series; we’re turning massive amounts of screentime over to it wholesale.

Does that matter if it’s good screentime though?

It feels strange to criticize something like “Sabrosito” for this, because “Sabrosito” is very good. It’s well acted, well written, well shot. It’s thrilling and funny and scary. It held me rapt for 50 minutes or so while feeling like it went by far more quickly.

It was a good episode of television.

There’s just a question of whether or not it was a good episode of Better Call Saul.

On the whole, I admit that I like the more direct Breaking Bad stuff here. The Don Eladio scene at the beginning fleshed out the backstory we saw teased in the “Hermanos” episode of that other show. There Hector killed Max, somebody who clearly meant a lot to Gus. Fine, and that’s all we needed to know. But here we see how Hector’s dealing and Gus’s dealing overlap, and why these mortal enemies had a common associate in Don Eladio at all.

Did I need to know any of that? Of course not. But it’s nice to shade in some detail.

Even more I liked Hector showing up at Los Pollos Hermanos, as the question of how Gus’s less savory dealings might collide with his outward professional life was only hinted at in Breaking Bad. Here Hector crushes the distinction, and it’s both very funny and very scary.

What I love most about having Hector back is that Mark Margolis really gets to stretch his legs (…sorry) in a way he didn’t in Breaking Bad. There he was confined to a wheelchair in anything other than flashbacks, and could only communicate through a bell and a series of angry expressions. Here he…asserts himself. Shows us who Hector is. Reminds us of why he was such an imposing figure in the first place.

The scene in which Hector’s crew takes the restaurant hostage — with some nice touch-and-go theatrics as a woman and her child attempt to leave — was fantastic, and it demonstrates what an absolute treasure Margolis really is. He’s a comedy villain that’s sometimes comic and sometimes villainous without either trait undercutting the other. It’s a hell of a daring balance and it pays off marvelously.

And that’s what Better Call Saul needs to be doing more of if it really wants to retread old ground: show us parts of it we haven’t seen.

Show Hector savoring a cigar while fast food employees yell at him, or scraping dogshit off his shoe onto Gus’s desk. Show Mike playing door repairman and quietly enjoying his torment of Chuck with a power drill.

Show us this world. Don’t show us that one from a negligibly removed perspective; show us things we couldn’t have seen before.

Dead characters are alive. Side characters are leading men. Moments we’ve only ever alluded to can be dug deeply into for their full comic and dramatic impact. Characters we’ve never even heard of are here, just waiting to give us something every bit as memorable as that towering show that came before.

There’s so much ahead of us.

But it also shows how willing Better Call Saul is to look backward instead.