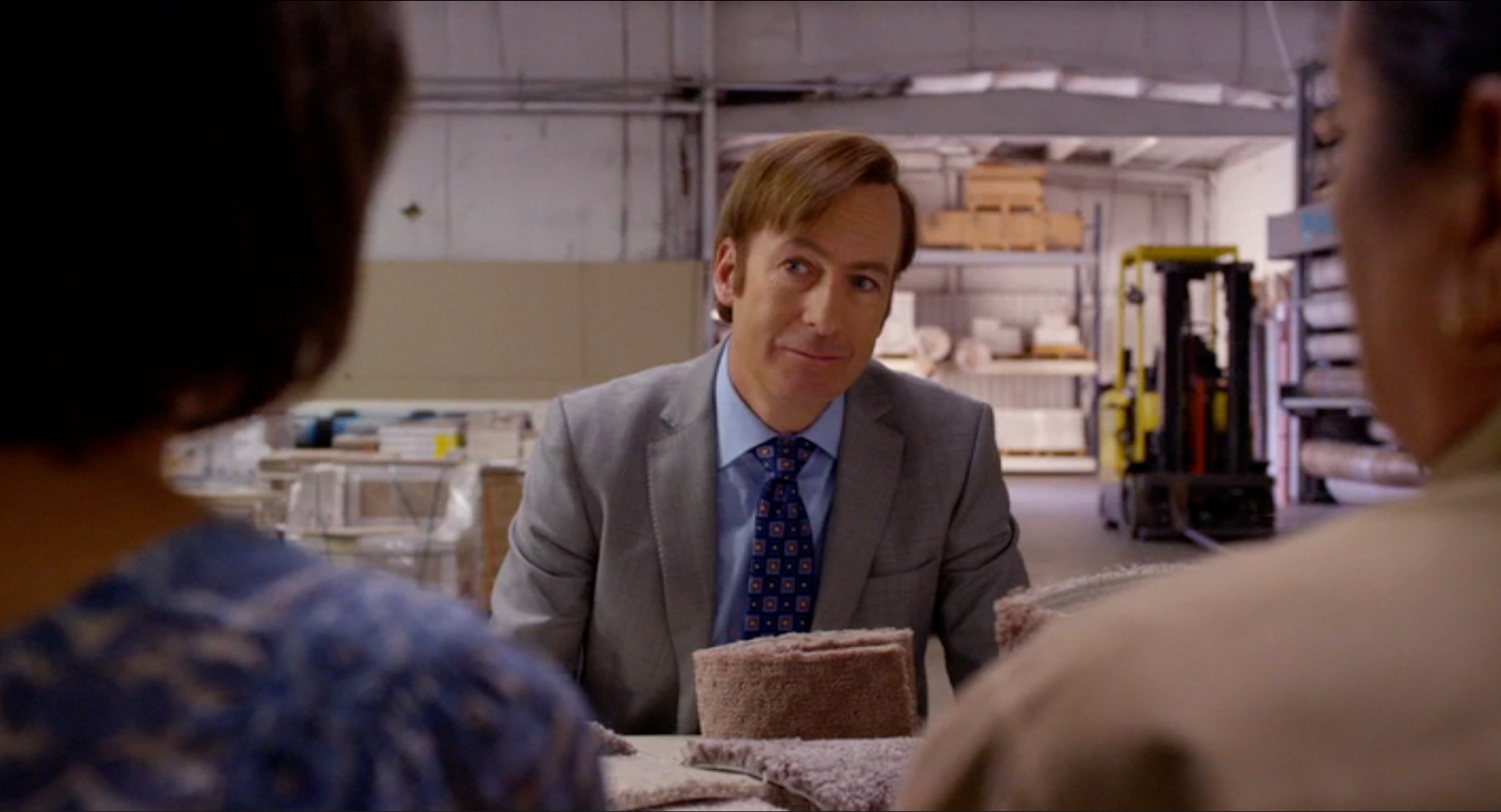 Well, that was an unexpectedly busy episode. And a surprisingly good one.

I had pretty strongly expected “Off Brand” to be quiet. Probably reflective. Coming off of the massive, important clash of last week’s “Chicanery,” this was a chance for the characters — and for Better Call Saul — to pause. To consider. To look forward and determine, carefully, what to do next. For comparison, think back to the stretch of episodes in Breaking Bad‘s third season when Walt successfully (though temporarily) extracts himself from the drug trade.

A crossroads has been reached. We may know here even better than we knew there that our hero will gravitate back toward darkness, but that silent moment during which the ball hangs suspended in the air is rife with tension. It’s a gift to the writers. It’s a chance to explore what remains after the bomb has gone off. A chance to breathe before everything comes crashing down again.

And Better Call Saul doesn’t breathe. It barrels forward. I’m surprised by that, but based on “Off Brand” I couldn’t possibly say it was a bad idea.

We pick up more or less where last week left off. Everyone’s aware of Chuck’s mental illness, but the characters are each handling it in their own ways. Rebecca is overcome with concern. Howard invites him to see this as a new beginning. Chuck himself calls his old doctor (I’m guessing a therapist), which may or may not be a larger turning point for him than the fact that he leaves the house alone. And Jimmy…well, Jimmy hits him with an indirect — but long overdue — fuck you when he refuses to check in on him.

Rebecca was right…I’ll grant her that much. Chuck is mentally ill. Chuck does need help.

But it’s not that Jimmy won’t help. It’s that he already did. For too long. And he’s seen what it’s gotten him.

Every man has his limit, and, if anything, Jimmy reached his two seasons too late. He sips champagne again. Chuck is in trouble, but this time he can deal with it alone.

Jimmy’s champagne comes at a cost, though. He wasn’t disbarred, but he was suspended for twelve months. He promises Kim that he’ll be able to pull his weight financially during that time, but by the end of “Off Brand” we don’t have a definitive answer as to how he intends to do that. Mainly, though, Jimmy isn’t taking the defeat lying down. He’s working. He’s finding direction. And as the commercial he produces suggests, he’s finding himself.

Yes, Saul Goodman is here at last. That’s an alias from the Slippin’ Jimmy days, but it’s probably important to note that he’s not using it to scam anybody. In fact, his offer is legitimate: in order to offset the sunk costs of his “Gimme Jimmy” campaign, he’s selling his commercial production services. His clients, so far as we can tell, will get exactly what they’re promised for exactly the cost he’s asking.

It’s not entirely on the up and up, however; Jimmy’s contract explicitly forbids him from selling his airtime. So…he’s not. He’s giving it away, with the purchase of his services. He’s found a loophole.

It’s a victimless crime…but one suspects that he’s on a slippery slope.

I like this. I’m pretty sure everyone watching this show expected him to adopt the Saul Goodman moniker in order to continue practicing law after getting in some kind of trouble under the name James McGill, and that’s certainly still possible. But, for now, it’s introduced in a completely unexpected — yet totally organic — way. The obvious answer wasn’t the answer, but what we get fits just as well. That’s pretty good writing.

Some more good writing comes from the way in which Nacho takes over for the incarcerated Tuco. Most interesting is the way it recontextualizes the job he hired Mike for (which came to a head in “Gloves Off”). Was he really afraid of Tuco and worried for his safety? It was certainly easy to believe, as we’d seen Tuco unhinged many times over. But the ease with which he slips into Tuco’s old role — and the quickness with which he’s compelled to solve a problem with violence — might imply something else. It might imply that he wanted Tuco out of the way for a different reason. He might have just wanted to climb up the chain.

This would make sense, as Hector being in power meant that Nacho would never be able to position himself above Tuco; family is important to Hector, and Nacho’s just a hired hand. But take Tuco out of the picture, and Nacho might start to shine a little brighter in the old man’s eye. Certainly Hector was impressed by the fact that Nacho had a gun to his head in this episode…and still came away with what he wanted.

Of course, we now also see Nacho at a crossroads. He’s perfectly happy to treat his dealers well, and he enjoys occupying Tuco’s seat. But then Hector pushes him a little further, and he’s almost as happy to lay a savage beating upon Krazy-8. He’s rattled by it — and injures himself with a sewing machine while reflecting on what he’s done — but if that’s what it takes to survive in Hector’s gang, that’s what he’ll do.

What he won’t do — at least immediately — is involve his family. We saw way back in “Cobbler” that Nacho’s uncle is an honest man who runs a bodyshop. Here we see that his father is just as honest, making and repairing upholstery. In short, Nacho is from a respectable background of hard workers. When Hector (ahem) hectors him into roping his father into the business, he pushes back.

We don’t get a definitive answer — Nacho is saved by Bell Telephone — but the reluctance is clear. And part of me wonders if Hector’s eventual crippling comes as a result of another arrangement between Nacho and Mike. When he wanted Tuco out of the way, he got it. If he decides he needs Hector out of the way as well…we’ll see.

I’ll be interested to find out what he does with the pill he stole from Hector. I doubt a missing pill will be enough to set Hector down an irreversible road toward infirmity, but perhaps Nacho will figure out what that medication is meant to be treating, and work out a plan from there.

So, yes, the big reveal this week was Saul Goodman…but that’s not the only connection reestablished with Breaking Bad. Gus tours the laundry facility that will come to house his superlab (which hopefully means we’ll be meeting Gayle soon), and then he gets into the car with…

And that’s a character I really didn’t expect to see again. Foolish me.

I loved Lydia on Breaking Bad. She was a late game addition that worked so well within that universe and managed to feel more important to it than her abbreviated run would suggest. Having her back is wonderful, because it means we’ll get to spend more time with her, yes. But also because it allows her to interact with Gus, and that’s a relationship we never saw on Breaking Bad as she wasn’t introduced until he was out of the way.

I actually did a double take when I saw Laura Fraser, and I’m pretty sure it was the biggest smile any Breaking Bad carryover got out of me.

And so Better Call Saul wastes no time in moving forward, and no time in drawing nearer its parent series.

Which is a kind of crossroads in itself.

Does the show rush forward, filling in the remaining blanks and drawing us toward its known point of termination?

Or does it spend a little more time with itself, building its own universe and asserting itself as an important TV drama in its own right?

You know my answer. But at least now I know that if the show pulls the other way, we still have episodes like this to look forward to.

And I’ll take a page out of Jimmy’s book on that one; it’s technically a loss, but it’s a loss worth celebrating.