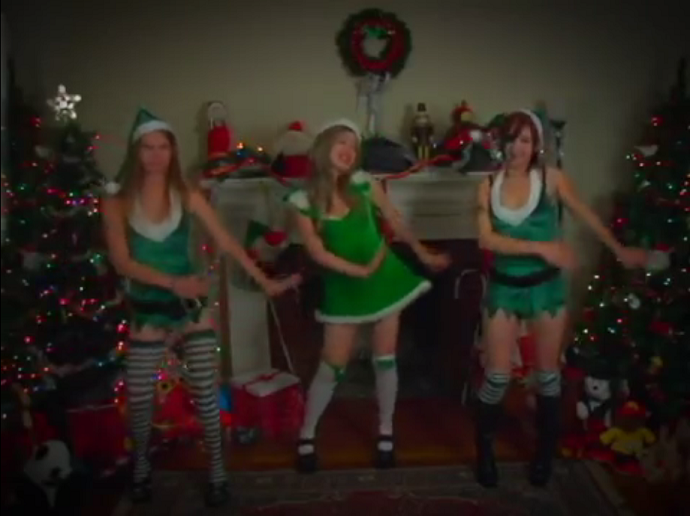 There’s a topic I’d actually like to talk about for a bit today, but first: the Xmas Bash! is Friday, which means it’s time for one last reminder…

Just visit this very website at the appointed time, and you’re there!

I was talking to a friend a few weeks ago about this year’s Xmas Bash! It’s no secret that I look forward to this event every year, and my heart grows three sizes every time I hear from somebody else that they do, too. People often try to get me to reveal what I’m going to show ahead of time, or at least give them a hint, but I never do. I like surprises. And I think that’s at least part of the fun as a viewer, as well, whether that’s conscious or not. Unwrapping little gifts one by one…finding out what’s inside…it’s a rush. It’s never a thrill to unwrap something you knew was coming, even if it’s what you wanted. The surprise is part of the gift.

So I don’t say much when I’m asked. I’ll be cagey. It’s more fun that way.

But this time, when my friend asked what I was looking forward to most about the stream, I replied honestly and without much thought: “I’m excited about the music.”

Music is an important part of my life. It always has been. And while I can’t say Christmas music in particular has ever been a favorite, I do remember writing to it when I was much younger. I’d turn on the radio on Christmas Eve — after all the commercials stopped playing and the DJs went home — and just write all night, listening to Christmas music, letting it inform my feelings and guide my hand.

I remember always being happy with what I wrote on Christmas Eve. Today, if I were able to read those pieces again, I’m sure I wouldn’t stand by any assessment of quality I might have made back then…but it felt good. It felt like it helped. And that was what mattered.

With the second Xmas Bash!!, I decided to give the event a charitable component. The holidays have always been difficult for me, as I struggle with depression in general and seasonal affective disorder specifically. And, y’know, all the deep and severe family issues that kept me writing alone on Christmas Eve instead of whatever you remember doing.

So with that stream, I tried to do some good. The holidays are hard for me, and it’s safe to say they always will be, but if I could make them easier for someone else…shouldn’t I?

I decided to solicit donations for The Trevor Project, and that felt right. (It still feels right.) With that decision, I started to think about format for the first time.

The inaugural Xmas Bash! was a simple affair. I’d stream shows directly from Hulu, and cut back to pre-recorded inserts of myself to hide the low-tech backend reality of me clicking around their website, loading up the next episode. Hulu inserted its own commercials automatically, so I suppose that was part of the format, but it wasn’t anything I decided ahead of time. We’d all watch these shows together and make fun of them in the chatroom, if we wanted to. (I wasn’t sure anyone would. I was pleasantly surprised.)

With the second Bash!!, knowing I’d have a charitable component, my thought went immediately to telethons. To the variety of performers and types of performances they’d employ while raising money for a good cause. It was corny, but that was part of the fun, I think. There was also the fact that you could tune in at any point during the event and see something unique. You didn’t have to stay tuned for the whole thing…you could pop in and out as you pleased. Indeed, my concept for the second Bash!! was to go all night, all the way through sunup the next day, so that folks everywhere could tune in whenever it worked for them, stay as long as they liked, and enjoy the event on their own terms.

I scrapped that aspect of it, because it was insane. And I’m glad I did, because keeping the event relatively compact means (largely) the same group of people are there from beginning to end. I get to weave a kind of flow and rhythm throughout the night, and they get to know each other, get to build upon each other’s jokes, get to make callbacks together. It’s more social. It’s more of a distinct event as opposed to a continuous hum throughout the night. Those old telethons didn’t have a social component. This did. That made it different, and I wanted to both respect and embrace that difference.

I kept the variety show aspect, though. And, in retrospect, I think the second Bash!! was the weakest one as a result. I blame myself entirely. Without knowing what would work in this context, I tried everything at once.

And so we had video game reviews. Original animations. Original (and sincere) songs from talented musicians. Long, digressive inserts that felt out of place in what should have been a much punchier event. All of that is on me, and all of that was scrapped as quickly as it was added.

When I say “the music,” I don’t mean Adam Lore’s incredible original Christmas songs we’ve gotten every year since. I mean the songs we play between shows. The strange music videos I keep managing to unearth each time. The stuff you will never, ever hear on the radio, no matter how late you stay up writing.

I…kind of love them. We joke about the event including “bad” television and music, but, in my heart, I don’t hate any of it. I love bad things. I adore them. I’ve listened to bad songs more than I’ve listened to songs I know are great. I’ve watched awful films over and over again, whereas one that truly moves me might never find its way back into my rotation.

Bad stuff is good, and every year, I try very hard to find the right kind of bad stuff for the Xmas Bash! It’s not enough (or even desirable) that a song be unlistenable. Instead, it just needs to be misguided. A song that has its heart in the right place, but is poorly written (like “Excuse My Christmas”). A song that features bizarre subject matter (like “Roast Fowl”). A song that tries to be funny but isn’t, a song that is funny in a different way than intended, a song that is catchy but embarrassing, a song that is simply too strange to exist.

I also need the song to have some kind of visual component. There are plenty of awful Christmas songs, but very few of those have a music video. And while there are any number of untalented YouTubers attempting to warble through “O! Holy Night,” I don’t want to include them, because that just seems cruel. There’s a difference between someone recording a song in their bedroom because they think it’s fun and someone who writes an original and delivers it in some charmingly cheesy music video. (In fact, the one time I did feature the work of some singular YouTuber, I reached out to her to make sure she’d be okay with my using her song in this context. She agreed, and we’ve since become friends.)

This year, I think I’ve found my favorite batch of songs yet…which shocks me, because every year I’m convinced I won’t be able to find more. I’m picky. They need to flow. They need to be listenable. There needs to be something for the chatroom to latch on to. Every year I think I pretty much do fine with that, but this year I feel that I may have done it best.

And so I look forward to sharing them. I look forward to airing these odd little music videos you almost certainly have never seen before, and even more certainly will never see again. To go back to our Christmas present metaphor, these are the gag gifts. The ones I know won’t have staying power, but which make you laugh. Which give us all a chuckle. Which make the holiday feel fun.

I hope everyone enjoys everything I choose to air. Why wouldn’t I? But this year, it really is the music I’m most excited about. Even at their worst-chosen, the music videos provide a brief cleansing of palate between Christmas specials. But at their best, they lead to rapid, rowdy reactions of their own. When they catch fire, they’re the highlights of the night.

I can’t promise that will happen this year, or any year. But I am proud of what I found. And if I can make just one person wish they never heard any of these songs, I’ll know I’ve done my job.

See you in two days.

One thought on “Excuse my Xmas songs”