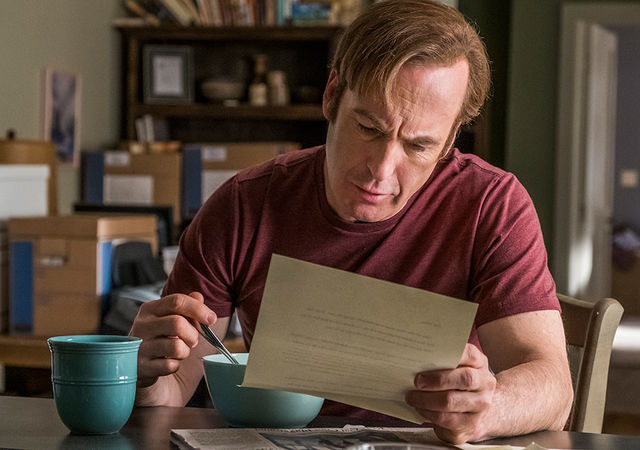 As much as I come down on Better Call Saul for so frequently echoing Breaking Bad, I do have to confess that I’m part of the problem. I am indeed one of those people in the audience who gets a giddy little thrill out of seeing a familiar face. I smile. My ears perk up. I really hate to admit this, but I pay more attention.

And so “Something Beautiful” reunited us with Gayle, one of my absolute favorite characters from Breaking Bad. Why I didn’t immediately think of him when Gus learned he’d have to find someone to cook product locally, I have no idea. Maybe the mention of the DEA in the season premiere had me primed for Hank, Gomez, and possibly Marie to be the next ambassadors from that show.

Instead it was the perfectly natural — and just about obligatory — appearance of Gayle. I laughed as soon as I recognized him. I was excited. I was happy to see him.

Breaking Bad didn’t keep him around for long. He was the one for whom Gus invested in the superlab, and I expect we’ll catch up to that moment fairly soon. He cooked with Walt for a while, and then was killed by Jesse in one of Walt’s power plays. He sang karaoke. He gave a copy of Leaves of Grass to the man who ordered his death. And that was about all we got of Gayle.

I won’t go too deeply into why I like him, but it does tie into the way this episode opened.

Following on from last week’s murder of Arturo, there’s some cleanup (which conveniently doubles as setup) to be done. Victor and Tyrus stage a hit on the already dead Arturo. They blow out his tires. Shoot up his car. Blast a hole in his head. Then, because it has to look real, they put a couple of bullets into Nacho.

During that scene, right up until its final moments, I appreciated its coldness. Its calmness. Its calculation. This is the way things work. We saw organized criminals organizing their criminal activities. There was no sense of panic; they worked methodically from a comprehensive mental checklist.

And it made me realize that on Breaking Bad, we didn’t get much of that. We always had criminal activity unfolding with varying degrees of complexity, but in almost every instance we were there with Walt or Jesse, or both. Outsiders. Which means we never knew if we were seeing how these criminals actually operate, or seeing how they behave when they’re reacting to the presence of an interloper.

Gayle represents the ultimate outsider. Perhaps we’ll learn more about him that will disprove me, but I never saw him as somebody who had an evil bone in his body. He might be a bit of a showoff, but I think he mainly aims to please. He wants to prove his worth, sure, but he also wants people to be proud of him. Both Gus and Walt were in positions of power over him, and rather than bristle at that fact (or bristle for long) he sets about trying to impress them.

I always saw him as being written as the absolute best human being a meth cook could possibly be. He was intelligent, articulate, friendly, accommodating, patient. And I think that’s what made him so fascinating as a character. He was here, in this life, where throats get cut and people get gunned down and bodies are dissolved in acid. But he’s reading poetry and singing showtunes and brewing the perfect cup of coffee. He maintains everything that makes him Gayle.

Compare that to Victor and Tyrus at the beginning of this episode. (And at the end of last week’s.) They’re all in Gus’ orbit. They’re all in (or soon to be in) the same business. They’re all cogs in the same machine. But could their approaches be more different? Could their personalities? It’s such an interesting dichotomy.

I wasn’t sure what to make of Gayle being the one who insisted on cooking meth, though. I kind of always figured that Gus would be the one to pull him in, but here, in fact, Gus pushes him away. I see why. Gus himself just oversaw the brutal and cruel elimination of a problematic element. He likes Gayle, and doesn’t want him to become a problematic element for somebody else.

As we know, Gus eventually relents. And as we also know, Gayle indeed becomes that problematic element.

We know what happens, but I’m genuinely curious to see how we get there.

Better Call Saul is certainly a strong enough show on its own by this point, but the one way in which it jogs a considerable distance behind Breaking Bad is in its use of Mike. In that show, Mike simply didn’t show up unless he had something to do. Where was he when we spent time with other characters? It didn’t matter. He was out there, somewhere, being Mike.

In this show, though, we keep cutting back to him treading water, because he’s one of the major characters. It’s fine; Jonathan Banks is a delight, and my favorite part of this episode might have been Mike’s quiet refusal to even look at the Hummel figurine while Jimmy was expounding on its virtues. But, as great as he is, I find myself wondering every few episodes why he’s even here.

I’ve harped on this before so I won’t waste too much breath on it again, but it’s very strange to have a show with dual protagonists that don’t actually interact all that much. Their paths have crossed, but they’ve never overlapped for long. And this episode opens with Mike (understandably) refusing to be part of Jimmy’s narrative.

That’s fine, and his decision was true to his character. But aside from the fact that the two of them were on Breaking Bad, is there any reason for them to both be headlining, separately, this show?

Mike needs something to do. Shit, that’s a large part of his character, now that I think about it. And I probably would have been happy enough with the Hummel figurine dismissal if we hadn’t already seen the show floundering for Mike’s purpose in the previous two episodes as well. Had he disappeared for a few episodes and then popped up just to blink slowly across a table at Jimmy, that could have been great. Instead he’s almost always around, even when he has nothing to do, so it didn’t register as much more than Banks hitting his contracted number of episodes.

Speaking of Breaking Bad — as we always are, every hour of the day, every day for the rest of our lives — we got to see Ira again!

…yeah, I didn’t recognize him, either. Evidently he was the owner of the pest control company that provided cover for Walt and Jesse late in the show’s run. As far as I can tell, he was in one episode. I didn’t remember him. I just watched this episode and I don’t remember him from Better Call Saul, either.

I do have to admit I liked that after he stole the Hummel figurine, he didn’t immediately slug Jimmy or something. As frustrated and nervous as he was, he turned out to enjoy the experience and the two of them seem to bond over how terribly it almost went. That was a neat little moment.

Jimmy didn’t really show us anything new this episode, and that’s okay. The most interesting bit of character work was how easily he proposes to Mike that they enlist Pryce — the pie sitter — to serve as a fence for the Hummel figurine. It’s notable that Jimmy is so fast to take someone who came to him for legal help and rope him into his own illegal activities. That’s a whole load of Saul peeking through.

I’d like to say that he also got a great moment at the very end of the episode, hollowly reading his brother’s suicide message aloud through mouthfuls of cereal, but Kim obviously owned that scene.

He reads more for the sake of it than out of any real sense of interest or investment. It’s there, it’s from Chuck, we’ll see what he says and get on with our day.

But Kim, gradually, perfectly, tragically breaks down. Jimmy isn’t laying any emotion over Chuck’s words; in fact, he’s robbing those words of emotion. But she feels it anyway. She hurts. The guilt comes welling up. Jimmy reads on without feeling and Kim feels enough for both of them.

It was painful to watch, not just because Kim was so believably hurting — God bless Rhea Seehorn — but because this is the rift between them.

As Jimmy hardens into Saul, Kim is still…Kim. They’re drifting apart. I don’t think they’ve hit the point of no return yet, but I do think it’s getting close. Every morning she wakes up, Jimmy’s just a little further away.

It would be nice to believe that she gets out while she can, before it’s too late, before it becomes something that drags her down and won’t let her go.

But I think Nacho’s situation at the beginning of the episode reminds us that that’s not how things work on this show.

We saw how Chuck got out. Heaven knows what’s in store for Kim.