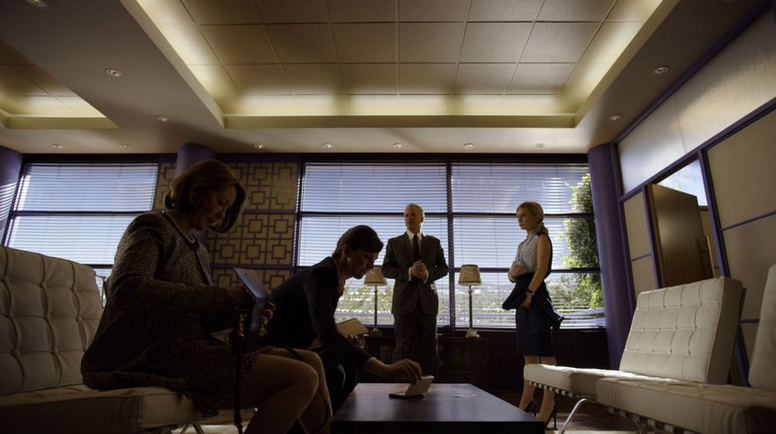 In last week’s review, I focused on one story rather than all three that were in the episode, expecting the other two would pick up in “Breathe” and I could talk about them more completely then.

I made the right judgement. As much as I could have said after “Smoke,” it felt a bit end a discussion of Jimmy’s ever-loosening morals to say, “Also Mike did a comedy routine with some idiots we’ll never see again.” Both things happened in the same episode, but it didn’t feel as though they belonged in the same review.

And, sure enough, “Breathe” picks up both of those threads I neglected, but only one of them reaches any kind of real milestone.

Season four began with three major plots unfolding concurrently. The first, and certainly the most important to this show rather than as setup for Breaking Bad, was the aftermath of Chuck’s death. This plot involves Jimmy, Kim, and Howard, and was the focus of “Smoke.”

But we also had the impending fallout from Hector’s heart attack, which involves a number of characters but is mainly centered upon Nacho and Gus for now.

The third and simplest of these was Mike’s security consultation of a Madrigal facility. We’ll deal with this one first, as it’s the one that’s advanced the least and, I’d argue, has revealed the least.

I don’t intend for that to sound dismissive — even if I guess it is, in one sense — because Mike’s consultation was fantastic. It was an excellent example of the kind of long scene Better Call Saul does (and Breaking Bad did) so well, opening at a point of confusion for the audience and gradually layering in context until you can understand what’s happening, allowing the “reveal” to come organically.

This was fun. I’ve gushed many times about my love of Jonathan Banks playing Action Grandpa, but I think this is the first time we’ve seen Mike employ his particular set of skills toward expressly comic ends. Nobody was in danger, nobody needed protection, nobody needed to escape. Mike’s background as a cop goes a long way toward justifying his immense capability in terms of offense and defense, but this was a nice chance to see — without any distraction — that his powers of observation are just as sharp.

This week Lydia meets with him and tells him to back off, but he doesn’t. It’s a nice exchange and Laura Fraser is a welcome presence, but I don’t think we learned anything there that we didn’t already know. Mike likes money, but only if he earns it. When he received that check for doing nothing last week he got right off his ass and did something. That’s about it.

I suspect the show is just killing a bit of time with that character until he needs to do something important. No real progress here, but it was fun jogging in place for a while.

The Hector thread is the one that really moves forward in this episode. It’s becoming more and more likely that Nacho’s pill-swapping scheme is what results in Hector’s eventual paralysis. I wondered at the end of last season if it would turn out to be another fakeout, like Mike with his sniper rifle. Better Call Saul can toy with our expectations — or rather foreknowledge — in a way that very, very few shows can.

And, hey, it still might. Or maybe I’m just hoping we get to see a little more of Hector being menacing. He spent so much of his Breaking Bad time in a wheelchair that I’ve really enjoyed Mark Margolis giving a more thorough performance of the character.

“Breathe” ends with what I think was one of the best scenes Better Call Saul has given us so far, and yet it still wasn’t the best scene in the episode. (More on that in a bit.) Nacho and Arturo, representing Hector, meet with Victor and Tyrus, representing Gus. Gus’ crew attempts to shortchange Hector’s. After some loaded silences and implied threats, Gus’ crew gives in and Hector’s crew gets their full cut.

Nacho and Arturo walk away, and we see figures approach them from between two Los Pollos Hermanos trailers. I surprised myself by saying, “Oh, shit,” out loud. It’s Gus with his boys. He puts a plastic bag over Arturo’s head and lets him slowly suffocate.

Pretty intense on its own, but it throws the interpretation of the previous scene into much more interesting places. Victor and Tyrus never meant to shortchange Nacho. They — and Gus — were testing him. Seeing how far he’d push. Seeing what he was made of. Seeing how he’d behave when he thought the big guys weren’t looking.

Tyrus tells him to take what they’re offering or to leave with nothing. What Nacho does reveals who he is, and how valuable he’ll be to Gus in the future.

Nacho is now under Gus’ thumb. He can ostensibly work on behalf of the Salamancas, but it’s Gus he’ll need to answer to. The fact that he pushed back against Gus’ men and got his full share might be the only reason he’s alive. Had he let himself get stiffed, Nacho wouldn’t be any more useful to Gus than Arturo was.

And so Nacho is trapped. He cannot serve two masters, and yet that’s exactly what he’ll need to do from this point forward.

Unlike the rest of the big players in this thread — Gus, Hector, Tuco, the cousins, Victor, Tyrus — we don’t see Nacho in Breaking Bad. His story has an unknown point of termination. He might get out — as he promises his father in this episode — or he might get taken down. We saw a number of characters get offed just so another character could make a point in Breaking Bad. We didn’t know any of them nearly as well as we know Nacho. Better Call Saul has seen to it that even a potentially senseless death would have meaning.

Personal prediction? I think the DEA gets him and he provides the information that leads them to Tuco in exchange for his freedom or a slap on the wrist. That’s based on almost nothing, though, so don’t go betting on it.

And, hey, speaking of the DEA, was that Marie Schrader working as the receptionist at the copy shop, standing in front of an appropriately purple wall? She had no lines so she wouldn’t have been in the credits, but that’s what I think I saw…and the episode ends with a suggestion that we haven’t seen the last of that place…

The big story in the previous episode was Jimmy’s reaction to Chuck’s death. He allowed Howard to shoulder the blame, and almost immediately lit up again. He remains bright and cheery — at least outwardly so — in “Breathe,” but it doesn’t feel the same. There was something about his sunny demeanor in the opening scene as he made breakfast that made it feel far more like I was watching Saul Goodman than Jimmy McGill. It felt a little phonier. A little more calculated. Just a bit artificial.

I could be wrong, and reading into something that isn’t there, but Kim picks up on something, too. So much so that she unloads on Howard later that day. And…well, maybe she has a point. I absolutely believe Howard has good intentions. He’s still a lawyer, a businessman, a professional, but he does have a heart. When he told Jimmy he believes Chuck’s death was intentional suicide, I’d bet he really did think it was the right thing to do.

But Kim sees that Jimmy’s just slightly “off,” and she blames Howard for being insensitive. Or, rather, she screams ruthlessly and emotionally at the man who until recently was her employer. (And who, it must be said, has lost his friend, mentor, and partner, and is blaming himself for it.)

It was great. It was an important scene. Rhea Seehorn has been the most consistent highlight of Better Call Saul so far, and the way in which she will fight for Jimmy is…

Kim is capable, competent, loyal, intelligent. And she’s throwing her support behind a man who is gradually shedding his humanity, who is creeping by the hour toward the repulsive alter ego that will replace Jimmy forever.

I don’t know that anybody’s ever fought for Jimmy before. His father refused to believe Jimmy was stealing from the family store, but a flashback in season two’s “Inflatable” showed us that that may not have been the problem anyway.

Jimmy’s lived a life surrounded by people who either coddle him or condemn him, and associated through much of his life with other thieves and grifters.

Who was there to fight for him? Who was there to convince him he was worth fighting for? Who saw him as a human being? As someone who deserved to be lifted up rather than reacted to? Who knew and understood his past and still believed there was a place for him in the future?

Season three was Chuck’s story. It was a long, frightening march over the event horizon. He’s gone now. He isn’t coming back.

Which leaves season four free to focus on peeling Kim away next.

My heart hurt watching her yell at Howard. Not just because the man didn’t deserve to be harangued for what was at worst poor judgment, but because the woman who harangued him did it on behalf of Jimmy.

Because she cared that fucking much about Jimmy.

And Jimmy leaves her in bed that very night to step outside and plot a petty burglary of a Hummel figurine.

He’s sliding away from the most important thing he’ll ever have, and toward a whole lot of shit he’ll wish he never touched.