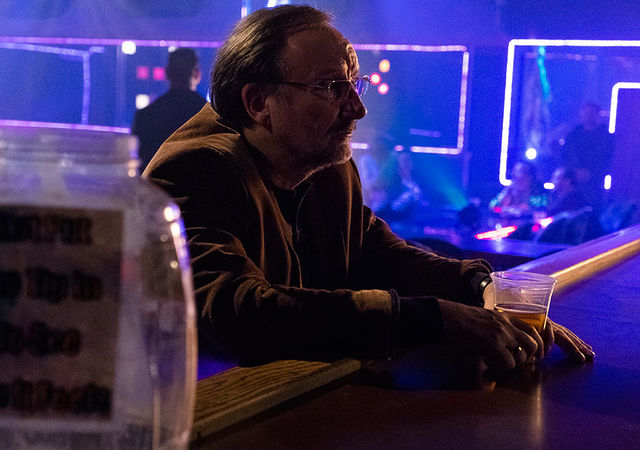 My biggest concern with Better Call Saul — admittedly one that has not held it back from being great in its own right — is its willingness to dive clearly into Breaking Bad territory and stay there. Call it a turf war, if you like.

Breaking Bad was an immense and important piece of television that was — for almost impossibly long stretches — perfect. And Better Call Saul has an identity of its own. While it may share characters and flesh out some details that that other show introduced, this show has its own merit, its own personality, its own momentum.

And so it feels disappointing to me when Better Call Saul lets characters like Gus or Mike occupy so much screen time without telling us anything new about them. Characters like Jimmy, and until very recently Hector, don’t have this problem. They’re different incarnations of the characters from those we knew on Breaking Bad. We do learn new things about them, simply because we get to know who they used to be.

I’ve complained about it enough in previous reviews that I don’t need to get back into it here, and I’m only bringing it up because “Coushatta” is an episode that does great things with the cards unique to Better Call Saul‘s hand. In a show that is too often happy to sideline its own potential, we get an episode that shows us why these characters, and their particular stories, are worth spending time with.

There’s Mrs. Nguyen, the salon owner, who pours Jimmy a drink and gives him trite relationship advice that reveals her, beautifully, to be a character who thinks she’s in the sitcom Better Call Saul nearly was. There’s Jimmy’s commercial crew, in particular the girl who’s been taking an improv class, helping him to impersonate an entire small town in Louisiana. And there’s Werner, who…

I like this guy. I enjoyed Mike’s recruitment of a construction foreman in “Quite a Ride” well enough, but I didn’t expect to enjoy the new character we got out of the deal so much.

Werner is a calm, measured, gifted engineer who honestly seems to do a decent job of managing his crew while also treating them respectfully. Like Gayle — who will put the lab they’re building to eventual use — he comes across as a good person who has his own reasons for devoting his talents to the bad guys. (In this case it seems to be money.)

Of course, this is revealed to be a piñata that was strung up just so it could be smashed to pieces, but there haven’t been many moments sweeter than when Mike sees Werner sitting alone in a strip club and invites him to a nearby bar for a quiet drink.

Mike, for whatever reason, likes Werner. Perhaps he needs the companionship. I wouldn’t say that’s much in line with the Mike we know otherwise, but it’s possible. Regardless, the two share an unexpectedly personal conversation. Werner does most of the talking, which is not a surprise, but the fact that Mike opens up at all is deeply significant. He remains a man of few words, but he still confides that his father was a deadbeat.

And that lends, I think, even more tragedy to Matty’s death. Mike harbors no fondness for his father, and it’s probably safe to say that he promised himself he’d be a far better father than he ever had. It’s also safe to say that he was. And he still got his son killed.

Sadly there’s another character unique to this show who spoils the mood. Of course he does, right? It’s Kai. The guy Mike told his security crew to keep an eye on. The guy who’s been difficult from the very start. The guy who actually gets named, so that we know who he is when Mike inevitably has to kill him.

Good old Kai, who got too drunk and touched a stripper. Mike steps away from Werner to take care of the problem child and…well, the child isn’t much of a problem. Kai returns to the barracks to get some sleep. Mike bribes the bouncer to keep things quiet. Since we met the kid we’ve been waiting for the showdown between him and Mike, and this could have been it, right here. But it wasn’t. Kai, wisely, backs down.

Mike returns to the bar, and we find that Werner was the problem child after all.

Unreliable, unpredictable Kai really is just a kid. He’ll do and say stupid things and he’ll likely face punishment for it. But it’s reliable, predictable Werner who poses the far greater risk.

On the back of a beermat, Werner doodles some schematics and talks to two new American friends a bit too openly about the project he’s working on. It’s bad, and it only got that bad because Mike liked the guy. Mike let his personal feelings get in the way of his professional ones. Earlier in the bar, Werner teaches a young man to pronounce hefeweizen…and then buys him one. The exchange is conducted over Mike, who at any point could tell (and clearly considers telling) Werner to keep his damn mouth shut.

But he doesn’t. Werner is lonely. Mike knows it. Mike lets Werner engage in friendly chat with the outside world…precisely what he and Gus have invested so much time and energy into preventing from happening.

And now I expect that it will be Werner rather than Kai who has to be permanently silenced. The next morning as the construction crew is loaded into the van, Mike lets a grabassing Kai pass. The chicanery he got up to last night isn’t what’s important. What’s important is Werner’s foolish, drunken conversation with outsiders who are bound to remember it.

Gus even brings it up. That’s never a good sign. Mike promises that he has his eye on Werner. The piñata is ready when he is.

I honestly can’t say enough about how much I’ve liked this development. Kai (and the show) made it clear that he was a dangerous addition to the team. What’s more, Mike is the most reliable perspective we have in Better Call Saul. When he identifies something as a problem, he’s right.

And I’m sure he was right. I’m sure Kai is a pile of shit that shouldn’t be involved with this project and cannot possibly do more good than he will do harm. But while we were all focused on him, we took our eyes off of Werner. Why not? Mike trusted the guy enough. Of course we can, too.

It’s an incredible sleight of hand that’s both terrifying and impressive. Before this episode, my girlfriend said she was looking forward to Kai inevitably getting killed. That’s what we were led to anticipate. That’s why Kai existed. But knowing someone to be a problematic presence isn’t what leads to catastrophe. No…catastrophe comes when you overlook someone you thought was safe.

Then there’s the introduction of another new character that I’m already in love with: Eduardo.

Eduardo is fantastic. In one scene the smirking, sashaying chef lands as an entertaining and welcome presence in an increasingly bleak corner of the show. Throughout Breaking Bad and Nacho’s storyline here, we’ve spent a lot of time in the drug trade and met pretty much exclusively scary people.

And, well, rightly so. It’s a scary and deadly business. The Salamancas themselves have all been various shades of terrifying, from unpredictable Tuco to the immovable cousins to worst human being imaginable Hector.

Eduardo represents a different kind of character, and not one we’ve seen before. The one who will joke around with you and cook you a damned fine meal and treat you like royalty without ever letting you forget that you’re scum, you’re being watched, and you’re on borrowed time.

He’s disarming, in other words. If you meet a Tuco or a Hector, you’re on your guard. (If you meet the cousins, you’re already dead.) But if you meet Eduardo, well…he’s charming. He’s fun. He’s clearly dangerous, but mainly because you’re far more likely to let him in.

Better Call Saul has a habit of introducing cartoony supporting characters and either humanizing or ditching them as time passes. And while I’d love to say that Eduardo isn’t a cartoon, that would be a lie. But he’s a calculated cartoon. A specific, useful persona that has his place in the Salamanca empire. And while I never expected Tuco or Hector to pose any real danger to Nacho, that’s because Nacho was always — always — clearly the smarter party.

With Eduardo? I’m not quite as sure. Nacho knows how to deal with the standard Salamanca attitude. Eduardo is going to require a whole other approach, and that’s an exciting complication.

The weightiest moment of the episode definitely came at the end, when Kim might as well have announced, “I’d prefer not to make it out of this show alive.”

Throughout most of “Coushatta,” we saw Kim putting up (and Jimmy respecting) a wall between herself and her former partner. By the end of it, she admits to missing their schemes and scams. The leak in the balloon is repaired. It is now guaranteed to burst.

I’m sure I’ll have more to say about this when we see exactly how it pans out, but right now I want to say that I’m surprised this wasn’t a season finale moment. Kim willfully turning to the dark side would seem like a nice breaking point, leaving us all to wonder specifically what that will look like. Instead we get two more episodes that will (to some degree at least) have the opportunity to show us.

I’m not complaining. I don’t know which approach I’d prefer. But this feels like the natural point of temporary closure, and it’s pretty gutsy and thrilling that the season has decided to continue beyond it.

Two more weeks. The warehouse is full of piñatas. Season four is going out swinging.