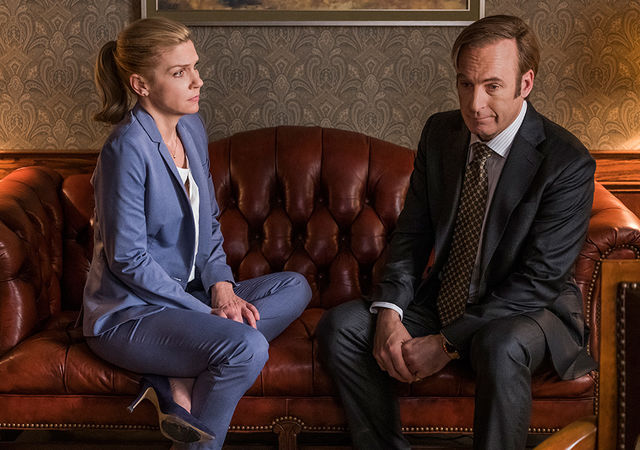 “You do your thing,” Jimmy says to Kim late in the episode. “I’ll do mine.”

It’s not confrontational at all. It’s delivered with the verbal cadence of agreement — we will each play our part in this plan — but the words themselves say the opposite.

It was a piercing moment in an episode that was almost entirely about the widening gulf between these two characters, and yet it was still something of a relief.

Then you notice the quiet whine of air escaping from a hole you didn’t realize existed. The balloon is no longer about to burst. It’s still too full, but the air is going somewhere else. It’s escaping in a less violent way. No matter what, the balloon is ruined. But knowing that the ruin is quieter, less dangerous, less explosive, brings with it its own kind of relief.

Jimmy and Kim are deflating. At least, for around 40 minutes of this 41-minute episode that’s the case. The very last development of “Something Stupid” is, true to its title, Kim calling Jimmy to suggest that maybe they won’t do things her way after all. She plugs the hole. We’re immediately in danger of that explosion all over again. You were losing Jimmy anyway, Kim. But you could have let him just…fade away.

“Something Stupid” was the funniest episode of the season so far, but it was also an emotional nightmare.

First, the comedy. Huell was in it, and Huell is, as always, a riot. In fact, I’m starting to wonder if we can have Huell pop up at all without his character defaulting to comic relief.

I’m not complaining, mind you; I don’t believe that Huell has to at some point become a tapestry of quiet desperation. But his increasing presence on the show will necessarily — as it does here — alter the balance between comedy and drama. In this episode we saw the guy flat out assault a plainclothes police officer, and it was funny. If that is going to be played for laughs, what can Huell possibly do that won’t be?

Then, of course, we have to bring Bill Burr back as Kuby. And we have to rehire Francesca so that she can become a comic figure as well. And…yeah, we’re on the slippery slope that reunites us with Saul Goodman as an expressly comic presence.

As opposed, y’know, to the increasingly problematic alter ego of a man who loses himself a little more each week.

Commenter Casey mentioned something in last week’s review that I deliberately chose not to mention in my writeup. Casey discussed the scene in which a relative of one of Jimmy’s elder law clients calls him, informing him that the old woman passed away. Jimmy asks about her, about what he remembers of her family, and about the whereabouts of her Alpine Shepherd Boy Hummel figurine.

“It’s a clear indication that Saul is co-opting what’s good about Jimmy,” wrote Casey. “Jimmy cared so much about these people that he remembers specifics from their wills — information that Saul is ready to pounce on and use for his own ends.”

The reason I held off on talking about it last week is that…well, I wasn’t sure where the show would go with it. And where it would go is what mattered.

By spending a decent chunk of time this season discussing, executing, and celebrating the theft of a Hummel figurine, Better Call Saul deliberately opened the door for us to worry in exactly the same way Casey did. And…well, I worried in that way, too.

But I wanted to wait before bringing it up, because the show could use that conversation to emphasize either of two fully oppositional points. (See again “You do your thing, I’ll do mine.”)

Jimmy’s conversation about the Alpine Shepherd Boy last week could either be a moment that reveals Saul’s co-opting of Jimmy’s positive characteristics, yes, or it could remind us that Jimmy himself — whatever else he’s doing, however far he’s willing to drift from his moral center — is still here. Is still alive. Still has hope.

It all depends on what he does next. Does he ask about the Hummel figurine so that he’ll know where to nab it? Or does he ask because he genuinely feels bad that a client he liked has passed away? The answer will either reveal that Saul is winning the battle for this man’s soul, or that Jimmy is.

Who ultimately wins? We know the answer. But the question of where we are on the map between Jimmy and Saul is the entire focus of this show, and this is an important mile marker.

I’m willing to be proven wrong (THERE IS A FIRST TIME FOR EVERYTHING) but I think that that conversation gets to stand on its own, a moment in which Jimmy reflects on a path that was once open to him that now has closed itself off just a little bit more.

And it’s a chance for us to reflect on all of that as well, and get just as sad about it.

Perhaps that conversation will even turn out to be the last point that we can genuinely identify Jimmy as Jimmy. “Something Stupid” sees him sinking knowingly and willingly into a darker existence. It’s one thing to commit a crime for some extra money, and it’s another to print up business cards with a fake identity and hire protection. One could be the work of a flawed human being headed in the wrong direction. The other is the work of a man establishing a sustainable criminal enterprise.

We even had our scene mirroring Kim’s confession last week. In that episode, she admitted to Jimmy that she’s been secretly acting as a public defender. In this episode, Jimmy admits he’s been selling burner phones to drug dealers.

The gulf between them widens. Yes, they’ve both been keeping secrets. But Kim’s secret was that she was doing good work for people who could benefit from a second chance. Jimmy’s secret is that he was helping criminals avoid the consequences of their crimes.

And so that hole…that quiet whisper of escaping air…that steady release of pressure…it was important to me.

To many viewers, I’m sure the opening montage of Kim and Jimmy leading very different lives — separated by a vertical line even in the scenes they share — was heartbreaking. To me, it was a fucking relief.

Kim and Jimmy will split up for good. It’s not even a question of when — we’re watching it happen — but rather a question of how.

We’ve seen how characters leave Jimmy’s orbit, and Saul’s orbit. And we’ve seen what happens to characters who stick around.

I didn’t and don’t want any of that for Kim. No matter what, she’s going to get hurt. But Rhea Seehorn plays the character so well that I frequently have trouble viewing her as a character. I view her as a person. Someone I love and care about and want to see happy.

I want that door to close between them and Kim Wexler to move on and do something fucking fantastic with her life. Because she can. So can Jimmy, but Jimmy chooses not to. I don’t want Kim to choose not to. I don’t care if she’s haunted for the rest of her life by thoughts of what could have been. Let her suffer in that way. That is the way I’d prefer her to suffer, because we already know what will be.

And so Kim and Jimmy deflate throughout the course of the episode. Three and a half seasons of inflating toward the breaking point and we arrive at “Something Stupid” which promises that it isn’t too late, that Kim and Jimmy may just drift apart, and whatever he does with his life can become, at long last, irrelevant to what she will do with hers.

Until the end, when she tells him they maybe won’t do things the right way. When she lets him in on some kind of scheme. When she sinks right back down to his level.

She could have gotten out.

He could have done his thing while she did hers.

A fair sentence for Huell — a repeat offender — will instead become something far more complex and infinitely less ethical.

Meanwhile, Mike talks with the German foreman, who tells him there will be one more explosion.

The other explosions happened off-camera, between episodes.

The explosion that’s still to come will happen right there on screen, and we will certainly wish it hadn’t.