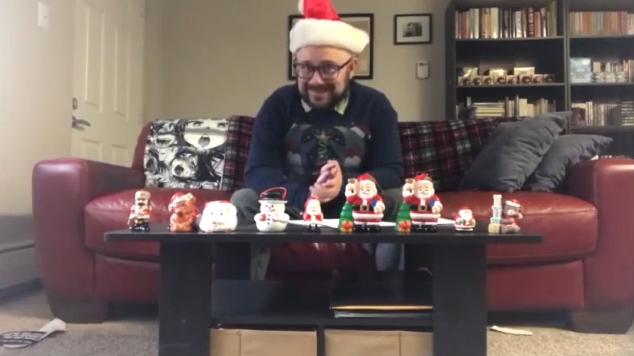 We are almost there! As of this posting, the Xmas Bash! is just two days away. Surely you’ve marked your calendar by now, but if your calendar was destroyed in a blaze, here’s the information again.

To join in, just come to this very website at the appointed time and click the links. That’s all you’ll have to do!

Yes, links, plural this year. Livestream has served us very well as a service for the past few events, but this year its price is exorbitant. We’re moving on to a different (but still great) service, so that’s fine but…well, it doesn’t have a chat solution that actually works for an event like this.

As such, we will be streaming through GoToMeeting and hosting the chat through Discord.

I know it sucks having to have two browser windows open, but GoToMeeting’s chat functionality wasn’t allowing for more than 10 people to chat openly, which is a huge problem for an event like this. (Thank goodness we tested this crap in advance!)

On the bright side, this means that folks who ONLY tune into GoToMeeting and stay out of Discord will have a 100% family-friendly event, if that’s what they’re looking for.

You can use the links above to create free accounts for each of those sites if you like, and you can donate to The Trevor Project ahead of time so that you’ll have one less window to futz with on the night.

I’ll be opening the stream a half hour or so early, with a test video, so that you’ll have plenty of time to get into both sites and configure your screen the way you like it.

Got that? Come here Saturday at 7 pm Eastern (or 6:30 if you want to get situated), open GoToMeeting to see the stream and Discord to chat, and you’re set.

But…well…what are you set for?

I mentioned before that this year’s stream is a bit less involved than previous years, as I’ve…well, I hate to say it, but I’ve been too busy. I still wanted to make sure I put together a great night for you all, and I’m pretty sure I have, but you’ll notice a few things missing.

In some cases, it’s because I had such little time to coordinate. In others, conflicting schedules. I wouldn’t normally point this stuff out, but I don’t want anyone to assume that the absence of any traditional faces is down to bad blood or personal issues.

So you’ll get five and a half hours of laughs. Seven forgotten Xmas specials. Loads of bizarre Xmas music videos. Vintage commercials. Host segments. Original songs. Miscellaneous goodies. And the funniest live chat on the internet.

The fact that this stupid thing is going five years after I decided to make you watch the ALF Christmas episode with me is astonishing. More astonishing is the fact that it’s genuinely the most fun I have all year, and I keep hearing that from others as well, for whom the Bash! has become an Xmas tradition.

You guys are great. This live stream is a hell of a lot of work to put together, and each year I assume it will be the last. You’re the reason I keep coming back to do more, so thank you. However much fun you have at this thing, I promise you I have at least twice as much.

I’ll see you in a couple of days. Don’t miss it. I’ve dug up so many things you’ll wish you’ve never seen.

I love you all.

3 thoughts on “Xmas Bash! Saturday! Here’s what to expect.”