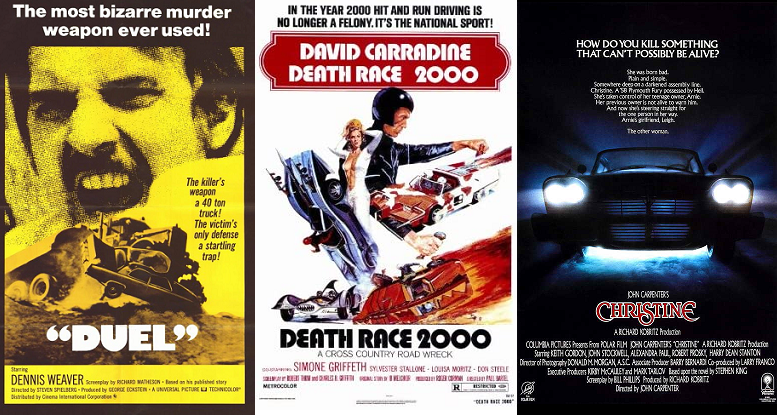 I wonder how many years running I’ll be able to start these announcements with “What a fuckin’ year, eh?”

Anyway, last year we celebrated Halloween by leaning directly into the worst tendencies of man with George A. Romero’s First Dead Trilogy. This time, let’s just have fun with some silly movies that have no social relevance or satirical value at all. None! I promise! Why are you looking at me that way?!

Beginning Oct. 17, join me for Trilogy of Terror VII: Vehicular Homicide. It will consist of longform analyses of the following films:

I’m posting this announcment far in advance so that you will have plenty of time to seek out and watch the films, if you’re interested. Death Race 2000 appears to be available in its entirety, for free, on YouTube. Christine also seems to be there, albeit in parts. Duel is available for purchase or rent through Amazon, iTunes, and probably lots of other places.

This was the first year that I invited readers to vote for one of the films, so thank you to all who participated on Twitter and Instagram. Voters selected Christine as the third film, so if you preferred that I wrote about Killdozer or Maximum Overdrive instead, you can blame everybody who isn’t me, for once!

This is one of the very first ideas I had when I started this series way back before the world ended, and I’m excited to finally cover it. If you choose to watch along, you’ll find quite a wide variation in terms of both tone and quality, and that’s always fun.

Also, it’s a heck of a selection of directorial talent. Steven Spielberg directed Duel, John Carpenter directed Christine, and Roger Corman produced Death Race 2000…though from what I’ve read he did some meddling that went well beyond his role as producer. No idea if we’ll get into that, but there you go.

I’m looking forward to covering these, and I sincerely hope you enjoy the essays. Now to actually write the damned things…