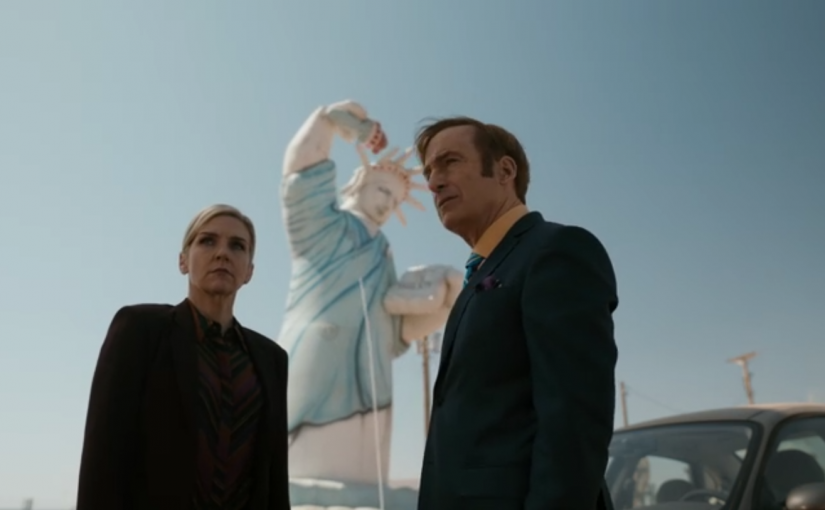 “Carrot and Stick” didn’t just make me understand “Wine and Roses” better; it was a strong, funny, interesting episode in its own right. I’d have loved this to have been the season opener instead but, for many obvious narrative reasons, that couldn’t have happened.

What it made me understand about “Wine and Roses” is that the increased length of season six (13 episodes compared to 10 in previous seasons) is giving things a little more time to come to a boil.

My assumption, at first, was that those extra episodes would be used to give us a longer boil, when we got to that point. More of an ending as opposed to more of a beginning, basically. I think that that would have been the obvious way to go, but there’s certainly nothing wrong with turning up the temperature more gradually. This was still the stronger episode, but I see now that “Wine and Roses” wasn’t a slow start in a race; it was the show warming up before the race even began.

“Carrot and Stick” also calls back to a couple of things I noticed in that episode, thematically. The more concrete one, perhaps, is that “Wine and Roses” showed us that Kim is working to shape the Saul persona, whereas Saul just sort of goes along with it. She’s the one who pushes him to find the right car and the right office for the character. Saul nods, agrees, and is certainly culpable for everything that that character ends up doing, but it’s Kim who keeps prodding him to do it, defining aspects of Saul’s persona for him.

We see that a few times here, most notably in how they deal with the Kettlemans. Saul takes one approach to the situation — the carrot — only for Kim to sweep in with the stick and all but tell him, “This is how Saul needs to deal with situations.” She is defining the character we knew in Breaking Bad. He plays the part but she writes the dialogue. It’s interesting.

The other callback had to do with Kim’s client from “Wine and Roses,” the kid who ended up serving as a getaway driver after his friend robbed a liquor store. Saul indeed serves as Kim’s getaway driver when leaving the Kettlemans. Like the kid last week, he knew where they were going, but didn’t know what his partner was going to do when they got there.

It was a lovely and at least slightly heartbreaking moment, not least because it proves that there’s still a little bit of Jimmy left in him.

We got a flash of it when he gave the Kettlemans money. As the series winds down, we’re going to get our final flash of Jimmy at some point. It’s possible that this was it. Jimmy is not above manipulating and even hurting people to further his own goals, but he’s not monstrous. Here, knowing he sent the Kettlemans on a wild legal goose chase, he attempts to soothe his conscience and make things at least partially right by paying them for their trouble. Kim doesn’t want that. Kim just wants to scare the shit out of them so that they won’t make trouble of their own.

All of this branches off from Kim’s desire to make Howard seem unreliable to Cliff, taking the form of drug-above suspicions. In the previous episode, Saul hid a baggie of baby powder in Howard’s gym locker so that Cliff would see it fall out. In this episode, Saul ropes the Kettlemens into telling Cliff that Howard is addicted to cocaine.

However that ends up panning out, it won’t be good. For now, though, and satisfyingly, we get to see the path of destruction that Kim is willing to carve on her way to getting what she wants. We don’t have to wait to see what happens to Howard, basically; we can see that she’s more than willing to ruin anyone who stands in her way, and we get to watch that happen before the climax.

Saul won’t always be there to salve the wound with money. And not all wounds will be able to be salved with money. It’s just a matter of time now before things go too far, and we’ve still got 11 episodes left. That’s exciting.

Elsewhere, we get an episode without Eduardo (unless I missed him totally?), but his shadow looms large. Nacho gets into a gunfight and then escapes his motel, intending to make it back into the U.S. on his own. I’m not saying that season openers need gunfights, but I will say that we got a gunfight here and I enjoyed it more than I enjoyed the season opener.

Also, Gus correctly intuits that Eduardo survived the attempt on his life, based solely on the fact that Hector was willing to extend a hand to him in peace. Gus knows full well that that can’t be right. I loved that.

Mike is dealing with the emotional fallout of knowing that Nacho is stranded in Mexico without support, be he isn’t able to convince Gus to let him go and rescue the kid. Instead, Gus proposes that they kidnap Nacho’s father, and let the boy return to bargain for his life.

Mike refuses. Tyrus pulls a gun on him. Mike turns around and walks slowly toward the door.

It would have been cool enough if Mike had just left, and that’s what I fully expected him to do, but even after so many years with this character, Mike finds ways to surprise. He doesn’t leave. He closes the door fully, then he locks it, then he walks right back to face the man with the gun and make it very clear that he’s not going to do what he’s being told to do.

Mike is a consistent highlight of Better Call Saul, and even if I didn’t like the show, I think his mere presence would make it worth watching.

Ultimately, “Carrot and Stick” ends before we know exactly what the next step with Nacho is, but it’s very clear that it’s going to go Mike’s way rather than Gus’. Mike’s let his soft heart get him into trouble before. Again, it’s just a matter of time before we see how this crashes down as well.

The show still has a lot of work to do when it comes to bringing all of its characters together so that they can be relevant to whatever climax is in store, but “Carrot and Stick” reassures us that big things can still happen along the way. I never doubted that, but the reassurance after last week is welcome. It’s not just a matter of moving pieces around the board; it’s an opportunity to see them each face smaller conflicts as they draw nearer the center.

Of course, that’s assuming that they do meet in the center. Maybe they don’t. Maybe Mike’s story reaches one climax. Maybe Gus’ reaches another. Maybe Eduardo and Nacho have a third. Maybe Kim and Saul have a fourth. Maybe, maybe, maybe. That would be okay. Many of these characters still haven’t crossed paths at all, let alone been directly important to each other.

Ending multiple separate stories in multiple separate ways wouldn’t be a cheat. It would be perfectly reasonable. But I hope that Better Call Saul has something other than that in mind. There is some artful way to bring all of this together for a single, uniformly satisfying final chapter. The show can, and I hope it figures out how.

It’s got 11 episodes left to do it. “Wine and Roses” didn’t leave me feeling totally optimistic that it would. “Carrot and Stick” has done a lot to win me back over.