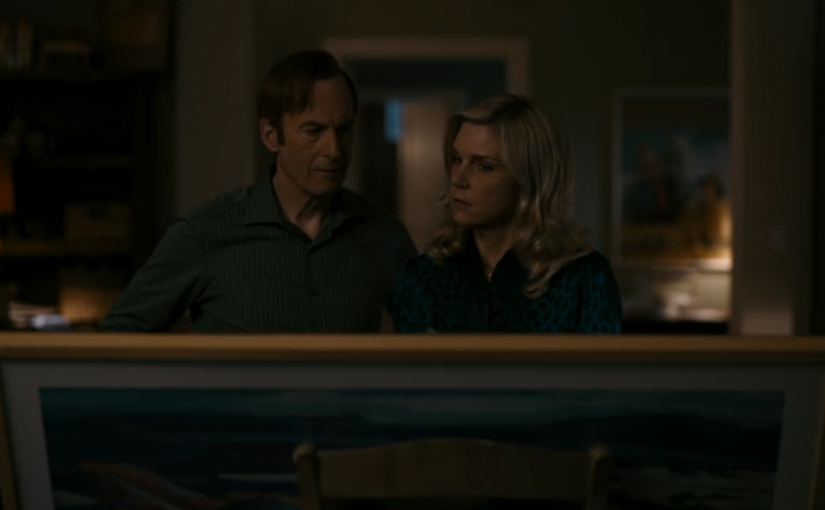 “Axe and Grind” — which definitely is not stretching the title gimmick of this batch of episodes no why would you even ask that question — is less of a standalone story than it is the first half of a two-part mid-season finale. That’s okay; that’s not a failing. The breaking point at the end of this episode isn’t the night before the big day; it’s partway into the big day, just as Saul and Kim’s plan shows the first sign of unraveling. We’re brought just far enough around the bend that we can understand that the “unfinished story” aspect of the episode is deliberate. All of that is fine. In fact, I liked a lot about “Axe and Grind.” However, it’s extremely difficult to appraise on its own merits.

Eventually we will all have our Blu-rays or streaming options and we’ll barrel right into “Plan and Execution” after the credits roll here. “Axe and Grind” will only really feel unfinished once, and that’s right now. Such is the nature of serialized television. I can live with that, but damned if I don’t struggle to review it.

Essentially, reviewing “Axe and Grind” is like evaluating the setup to a joke without yet knowing the punchline. There’s room to criticize, certainly, but how much value would there be in doing so? I think that’s why most “reviews” of shows like this — my own included, without question — end up devolving into guesswork about what comes next, or reflections on things we’ve seen weeks ago that we’ve finally had time to digest. Can one review a single chapter in a book? You bet. Will that review feel limited and incomplete? Almost always.

So, what can we do? Poke around the margins, find some stuff we like, find some stuff that confuses us, point it all out, and wait for a week, I suppose. That’s not the fault of “Axe and Grind.” Instead, it’s just what we end up being left with as we wait for the joke to land.

Fortunately, the setup seems quite good. This entire season has been great about keeping Saul and Kim’s plan a secret from the viewer. We’ve seen their little sticky-note schedule, but like the vet this week, they’re smart enough not to record their crimes in plain English. We get symbols and metaphors, which helps us to understand how meticulously these two have planned everything without the show having to tip its hand in advance.

What’s more, the secrecy is clearly deliberate. Better Call Saul is stringing us along, and I mean that in a positive way. We never know quite what these two are planning until we see it happen, and even then we’ve only gotten one small glimpse of the larger scheme. Even now, as that scheme comes to a head at the Sandpiper mediation, as Saul flails because he hired a double for someone he didn’t realize had broken his arm, as Kim swings her car around on the highway to rescue the scheme at the expense of a massive career opportunity, we don’t exactly know what they’ve been building toward.

Again, I could guess. Honestly, I’d rather not. I’d like to let the comedian finish telling the joke.

There are still things we can praise about the episode, though. Specifically, the character work, right down to the actor who played young Kim (who we also saw last season in “Wexler v. Goodman”). She and her mother are both perfect, and I can’t even quite explain it. The first we see of young Kim in this episode is just her foot tapping, and I couldn’t even tell you if we’ve seen present-day Kim tapping her foot like that, but just seeing that sneaker tapping in that rhythm was enough for me to understand immediately that this was Kim.

Both she and her mother nail Rhea Seehorn’s…cadence? I do mean cadence, but I don’t think I just mean that. Kim has a very specific way of speaking. She doesn’t just talk; she clips her words. She measures her pauses. She speaks quickly, but not too quickly, then comes to a full stop before starting at full pace again. There’s some degree of posturing behind everything she says. She’s practiced…like a scam artist. Everything she says feels rehearsed or at least refined, even when it can’t have been. It’s difficult to explain, but not difficult to pick up on. Rhea Seehorn knows precisely who the character is, which, yes, is impressive. For her younger stand-in and her mother, it’s even more impressive. They get something that it isn’t even easy to articulate, and watching it is a delight.

The scene with the vet was great as well. I actually did wonder recently if he would appear again. Not because he’s a favorite character or anything — I like him well enough — but because I wondered where he would have gone before Breaking Bad. It was a question that didn’t need answering, but I wondered about it and, sure enough, we got our answer. The guy is corrupt, yes, absolutely, but he does love his job, and he’s going to leave and get back to what he loves in a new place as a new man, leaving his little black book in the grubby hands of Saul Goodman. Hey, look, another question that didn’t need answering, but which is answered simply and elegantly. It was a good scene.

Also, maybe this was a question that did need to be addressed in some capacity, but I fucking loved seeing Francesca get worn down so quickly by working with Saul Goodman as opposed to Jimmy McGill. It’s a very early sign of how toxic his new persona is, as she’s forced to watch clients stub their cigarettes out on her furniture, relieve themselves in her water features, and even participate in Saul’s dirty dealings, her objections going unheard. Her transformation is played for comedy — rightly so, I think — but my lord did I enjoy it.

It doesn’t stop there. Howard and his wife are on profoundly rocky ground — we got just a hint of this in “Hit and Run” — and those two actors played it almost depressingly well. I could open up here. I will choose not to do that. Suffice it to say, I can’t have been the only one who recognized some real truth in the precise nature of their distance.

Cliff tells Kim that the Jackson-Mercer Foundation is looking to expand, and may be able to make great use of her talents as an advocate for the underrepresented and overprosecuted, giving us what (as of this episode’s conclusion) might have been our final glimpse of a happy ending to Kim’s journey. Even as she plays the old man, he is willing to vouch for her in what could be a life-changing step in her career. It’s one she’d enjoy, it’s one that would help a lot of people, and it’s one that she doesn’t end up pursuing. That’s the real axe in the gut.

And Mike has an astronomy night with his granddaughter, from across the street but a million miles away, in what was probably the sweetest and saddest scene this show has had all season. It was great. It beats Gus cleaning between the shower tiles with a toothbrush, but I guess that doesn’t say much.

Honestly, I think my least favorite part of the entire episode was the Eduardo bit, which is surprising to me because Tony Dalton is such a consistent highlight. Even so, it wasn’t bad…it just felt a bit too much like I could see the wheels turning.

Season five ended with Eduardo surviving an attempt on his life and plowing ahead toward revenge. My guess is that the writing staff then sat down to work on season six and realized that…well…he can’t get that revenge just yet, because there’s still a whole season left. Eduardo’s Excellent Adventure in Germany — especially since it comes after a long stretch of episodes in which he doesn’t appear at all — seems like it’s necessary only to kill time. He can’t confront Gus or Mike or whomever else, because we’re too far from the climax. But he needs to do something, so we’ll ship him overseas to bother some people we’ve never met before.

It’s okay, to be clear. His scenes with Werner’s widow last week were great. His brutality this week — after feigning helplessness — was pretty good, too. It’s not bad television, but it’s inelegant television. Maybe I’ll change my mind after whatever happens next. For now, though, it seems like Eduardo is going through a lot of narrative trouble to justify walking up to Gus and beating the shit out of him. We’ll see.

Overall, “Axe and Grind” was good, but it was still just an hour of getting all the pieces into the necessary places so that the mid-season finale will be able to do everything it needs to do.

That doesn’t make this episode disappointing and it far from makes it a failure. It just makes everything a little tougher to judge for another week.

So let’s regroup then and see which pieces are still on the board.