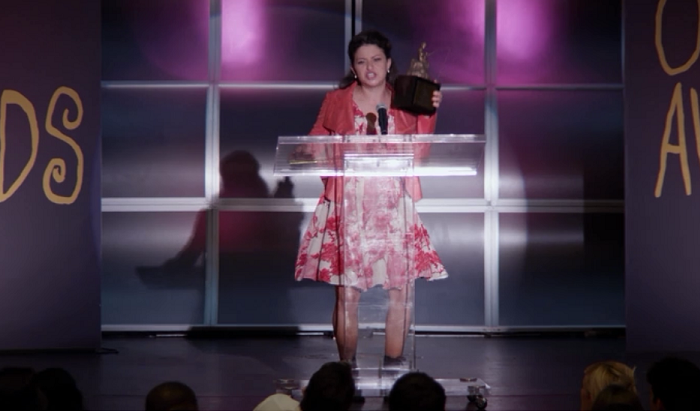 Not a moment too soon — arguably around ten episodes too late — something genuinely incredible happens: we get a truly great episode of Arrested Development season four.

If there was ever any doubt that Alia Shawkat was one of this show’s greatest assets (and seriously, if there was any, you and I need to have a serious talk), “Señoritis” should dispel that immediately.

In fact, between this episode and the next (“It Gets Better”) I really started to hope that the concluding episodes of the season would retroactively make what came earlier play that much better. They’re both very good, though I think this one edges “It Gets Better” out, and particularly in this case it does a great job of filling in gaps and layering new details onto what we’ve already seen.

Sadly, as with just about anything good in season four, it’s an exception. But it’s an exception I will happily take, and it’s the one episode from this mess that I think might be able to stand next to the classic years.

“Señoritis” reveals that even though we haven’t seen much of Maeby, she’s been in the background the entire time, pulling strings and orchestrating (knowingly or not) much of what’s been happening to the rest of the family. This is both welcome from a narrative standpoint and absolutely true to the nature of the character.

The Bluths can be divided fairly evenly into three groups. There are the Leaders, who tend to set the direction that others will take (Lucille, Michael and Maeby); the Followers, who will go along with whomever appears to be in charge at the time (George Sr., Buster and George Michael); and the Bystanders, who won’t do much of anything unless it’s forced upon them (Lindsay, Tobias and GOB).

Maeby is a doer, and as much as what she does might be self-destructive — as evidenced here by continually re-enrolling in high school, backing a non-existent company and sleeping with an underaged boy — it’s always pro-active. Maeby may be the architect of her own misfortune, but in a season so aimless it’s positively thrilling to see somebody grab things with both hands and set a course of her own…even if that course is directly into the ground.

I love Maeby. I’d rank her right up there with Lisa Simpson as one of my all-time favorite female characters on television, and while I’m sorry we didn’t see much of her this season, that might be for the best. I came out of “Señoritis” wishing Maeby got a second episode (rather than, say, Tobias or George Sr.) but the way things have gone episode two would probably have been about Maeby traveling through time with a wise-cracking kangaroo so I’m not losing sleep over it.

The half hour or so that we do spend with her is so strong that it almost takes deliberate effort to notice why: Alia Shawkat herself. While the episode feels less sloppy and better written, the more I think about it the more I think we can actually attribute that to the actress herself, who simply takes command of the material in a way that her elder co-stars do not.

“The Netflick” isn’t a funny joke…mispronouncing “heiress” isn’t a funny joke…knocking a chair over at the end of a board meeting isn’t a funny joke. None of that would play on paper, and most actors wouldn’t know what to do with it. In Shawkat’s hands, however, these moments are hilarious. She’s evolved over the years from being an underutilized player to a driving comic force, and seeing her leap to the fore this late in the season with such a strong presence is extremely rewarding.

Her speech at The Opie Awards, it has to be said, is the single funniest sequence in the entire batch of episodes, and again that’s all down to the woman behind it. There’s nothing funnier than Maeby’s overconfident, profane screed (bookended by a perfect Kirk Cameron joke and a spot-on observational gag about the rigid structure of award shows) and it belongs on a highlight reel right between Lucille shrieking at Gene Parmesan and Michael reacting to the Mayon-egg.

I could pick things apart here, I’m sure, but as I mentioned in a previous review I’m only doing that when I’m not laughing. If I’m laughing, the flaws don’t matter. They smooth themselves over in service of the experience, and I’m happy to let that happen. It’s only when I’m not laughing that my mind wanders, and not once in any of the times I’ve viewed “Señoritis” has my mind wandered. That’s saying a lot.

It is worth mentioning though that as much as the episode paints Maeby into scenes we’ve already encountered, it’s really the small stuff that resonates most. While the “biggest” reveal is probably that she posed as her mother’s shaman in India, far more rewarding are the simpler details, like Maeby squawking like a bird just off camera when she’s caught by surprise. It’s not a problem, but just an observation…and again further reinforcement of the fact that Alia Shawkat works wonders with the smallest moments.

It’s probably also worth discussing the ending. While the episode (rightly) shows Maeby facing a very large consequence for sleeping with a minor, I do think it plays differently to the audience than it would have if the genders were flipped. I think Hurwitz and co. actually have some fun with this, as Maeby herself shrugs it off and she says she’ll be fine…whereas I think that would be a lot less funny if it were George Michael saying the same thing about sleeping with a high schooler, or Tobias after actually having done what that entrapment show believed he wanted to do.

There’s a double standard at work there, and I like that Maeby’s shrug is so obvious that it can’t help but also play as an observation of that imbalance. It’s a great moment that makes you laugh, and then very quickly reconsider that laughter. (Just as Maeby very quickly, in “episode time” at least, reconsiders that shrug.)

I like “Señoritis.” And — spoilerzz — I like “It Gets Better.” As down as I’ve been on season four, I really feel as though there are about five or six great episodes’ worth of material here. In most cases it would require a lot of whittling to find the gold, but “Señoritis” arrives fully formed. Much like the character of Maeby herself, who has the singular distinction of making it out of this clusterfuck unscathed.

KITTY: Guess what!?
MAEBY: What?
KITTY: I’ll just tell you because I feel like we’ll be here forever and I have a meeting.