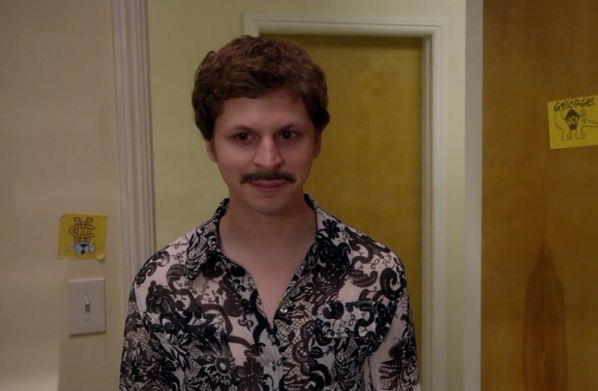 “It Gets Better” really does live up to its name, serving as the second very good episode in a row, right after “Señoritis,” at a point when the season is running short on chances for redemption.

Michael Cera’s obviously been busy enough in the Arrested Development downtime to hone his comedic chops, and fans of the show get a big payoff here as his focal episode manages to be funny, painful, and surprisingly insightful. It works as a character sketch and it also works as an exploration of how a young man finds his identity. It may also double as a sort of origin story, but we’ll get into that in a bit.

It’s not quite on the level of “Señoritis,” though that’s mainly down to structural differences. Whereas that episode told a more or less complete story, “It Gets Better” doesn’t manage to wind itself to a conclusion. We just get a shot of Michael and Ron Howard hanging out next to a photo booth and that qualifies as an ending only because the “On the next…” title card follows it. Which is a shame, because “It Gets Better” was heading in a very interesting direction by that point, and it would have been nice if the episode had the courage to see its own story through.

George Michael’s always been a great character, and one of the things Arrested Development always did so well was allowing its characters room to grow. That sort of thing is easier to handle with the adult characters, as a simple change in occupation or a new relationship is enough to shake things up, but for the kids it’s a little different. Their lives change much more rapidly — and the aging of the actors is much more apparent — so the shakeups need to be a little more severe if anything’s going to qualify as growth.

So what we get here is a great little episode that shows us exactly that. George Michael goes off to college, and on behalf of every socially-retarded young man who did the same thing before him, let me say that his transition from insecure boy to awkward man is absolutely perfect.

College is perhaps the one time in everybody’s life where we fit. That’s not because we have any more to offer at that point than at any other time in our lives, but rather because it’s such a broad experience. You can immerse yourself in studies, sports, girls, boys, drinking, drugs, sex, road trips, video games, music, theater or anything else you like. Absolutely every possible interest you might have is covered; there’s always somebody there waiting to share it with you.

And so your confidence grows. You might have felt like the only sane person in your town (or family), but you meet like-minded individuals. People laugh at your jokes. Someone thinks you’re cute. You get along with a particular professor. You feel, for once, like a complete human being. And all of a sudden, whatever life you had before college? It just feels so empty.

Which is George Michael’s arc in a nutshell. At UCI he falls in love, has his heart broken, makes a friend, is betrayed, makes amends, and experiments time and again with who he is. A new beverage with breakfast, some facial hair, a different shirt before a girl comes over. It’s a character becoming human.

We blow through the first three years of his college career, touching upon all of the expected rites of passage along the way, but things slow down for us exactly when they do for him: when his father moves into the dorm during senior year. Suddenly he’s just a boy again. That glorious, temporary new world gets snatched away from George Michael one year too soon.

So far, so excellent. And there really isn’t much to complain about here at all, apart from the fact that the narrative chooses to fray and unravel rather than lead us anywhere of merit. We get some nice toying with the idea that George Michael becomes more like his father the more he tries to distance himself from the man, but it’s a little too obvious (and is spelled out explicitly at various times) so there’s little joy in connecting those dots for ourselves.

Oh well. I’ll trade a solid plot trajectory (not that we really had one in the first place this season) for a great piece of character work any day, and that’s what “It Gets Better” is. It’s a too-brief moment of personal triumph for George Michael, and an ultimate reminder that the real world is always there, just around the corner, waiting to take it all away from you again.

I guess I do have to mention that we see George Michael’s mother for the first (and so far only) time in this episode, in some archival footage. The idea is nice, but I’m not sure I buy that Michael would allow his infant son to share a crib with a painfully hot, sharp metal box…Bluth Company product or not.

Also, as long as we’re on the subject, abrupt editing of the Cornballer infomercial can’t disguise the fact that at one point we used to put Jeffrey Tambor in a wig to play a younger version of himself, and that Seth Rogen with a mustache is really no substitute for that.

The young Barry on the other hand? That’s Henry Winkler’s actual son, and that’s spot-on perfect.

Episode 13: “It Gets Better”
Central Character: George Michael
Other Family Appearances: Michael, Maeby
Most Clumsy Reference to Original Run: “Stay on top of her. You may need to ride her pretty hard.”
Scene That Most Needed Tightening: The reprise of the back and forth messages between Michael and George Michael, which not only goes on too long but almost completely dulls the emotional impact that the scene had originally earned.
Best Line / Exchange:

GEORGE MICHAEL: Boom! And that’s what we call only being behind by three.