Hello everybody! It’s been ages since I posted anything so how about I post something! I’m kind of in the middle of a move and sorting some other things out so hopefully we can get things cleared up and I’ll be back to posting partially-informed horseshit again, or maybe I’ll finally do those Venture Bros. reviews I promised…but until then, why not unwind with a game so cheap, you can buy it with two quarters and get change? (You can’t really, because your payment has to be made digitally.) 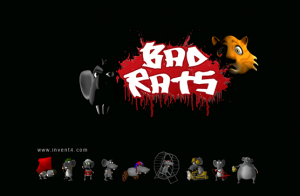 Yes, it’s Bad Rats: The Rats’ Revenge, the game so nice they named it twice! …but then only used one of the names anywhere in the game. Seriously, I never saw “The Rats’ Revenge” anywhere but the page from which I bought the game. I guess they realized at some point that it wasn’t technically revenge if the animal they spend all their time killing never did anything to them in the first place but WHAT DO I KNOW.

The game opens with a series of spotlights on computer generated mice (or rats, I guess) as they gear up independently to murder a cat. The cat in question stands on his hind legs and moves his head back and forth in the universal gesture for “fretfulness.” It looks like something I could have put together in 1997 on that stupid 3D rendering program that came with my computer, and it makes the “Money For Nothing” music video look like Wall-E. 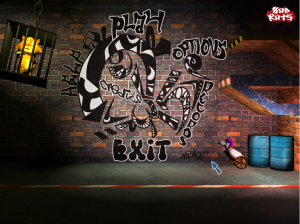 Then we get a menu screen where all of the choices are inconveniently written in illegible graffiti, I guess in order to appeal to all the gang members who really want to play an animal-based physics puzzler, but just wouldn’t otherwise feel like it relates to them.

The little rat in the cannon keeps firing himself at the cat in the cage, and the cat is just south of shitting himself in fear. Already this is like Tom and Jerry Go to Gitmo.

I start the game and Jesus goodness does this look horrible. 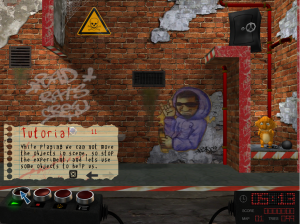 Of course that’s nothing compared to how it sounds. I start the tutorial, because that’s what’s being recommended to me as a new player, and I really want to properly understand how to insert bamboo shoots underneath the cat’s fingernails. A level begins…with a narrator talking to me.

Only it’s not a narrator. Not a human one anyway.

It’s one of those auto-generated Microsoft voices, with the oddly clipped speech and improper stressing of syllables. They couldn’t even pay an intern $20 to record an introduction? This is cheapness in a way that I’ve never actually seen in a game before, and for some reason this robo-narrator leaves out articles, so that he says things like, “Your objective is to hit ball into vault.”

Or whatever he said.

I couldn’t catch it because I was baffled by why they’d program a grammatically stunted autobot into game to serve as narrator when surely they could have at least asked a friend or family member to read the instructions like…well…a human being.

The game invites me to press the “play” button, and I do. This results in time unfreezing. A ball falls pointlessly out of the air and the cat chained up in the corner starts realizing how wasted its life has been. 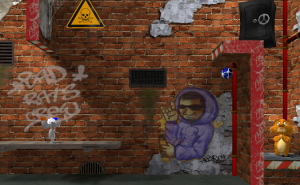 The narrator brokenly instructs me to pause the game so that I can place other things on the screen, which will affect the ball and, with luck, will ultimately result in a chained and defenseless animal being disemboweled. I didn’t write down exactly what the narrator said, but I am comfortable assuming it was “Now to be using an pause buttons result for object placing.”

So I place a little rat with a baseball bat underneath the ball. He swats the ball against the wall a few times and then loses interest even faster than I do. That is to say pretty fuckin’ fast. 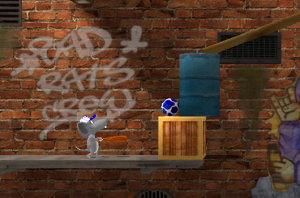 Time to try again, I guess. This time I pile up a bunch of garbage so that the rat can hit the ball up the plywood board or something, which should knock the safe down onto the cat who totally deserves this, but it doesn’t work. The ball bounces out of reach but the rat keeps swinging his bat for no reason as neither he nor the game realizes the ball’s stopped completely.

For a tutorial this is pretty difficult. I don’t mean it’s overbearingly hard or anything, but the point of a tutorial, I thought, was to tell you what to do. Otherwise it’s not a tutorial; it’s just a level with robo-Borat bleating at you for a few seconds.

I try to place the rat next to the cat so that he can just blindly pummel him to death with the baseball bat, but it doesn’t work. 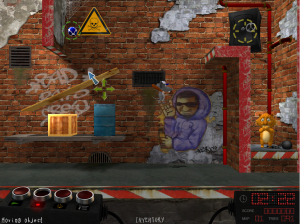 I move every item around in every possible configuration, but nothing makes the rat hit the ball into the safe. This is probably because the physics in this game are fucking terrible. The board, for example, can be used as a slope, but when you’re moving it around it might or might not actually adjust its angle, which means you have to keep trying again and again, doing the same thing every time, for it to finally decide to rest properly against something rather than just hover at an impossible slope.

That rat is floating in the air because I moved him there to get him out of the way, and I pressed “play” accidentally before moving him back. He fell onto the concrete and blood came out of him. 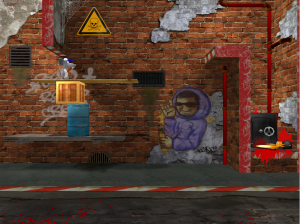 By trying the same thing I’ve already tried fifteen times, the rat hits the ball into the safe and the cat’s dead, with its guts and gore splashing all over everything because that’s funny.

I mean, hey, I’m all for violence as comedy…but isn’t there more to it than dropping something heavy onto somebody WHO THEN DIES? 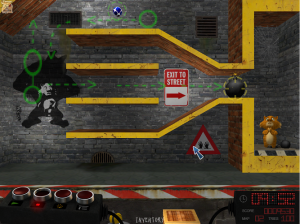 Level 2 begins with a text window explaining that I need to hit the ball into the bomb this time, in order to blow up the cat. Why couldn’t they have just done that with the previous level? Or do they think tutorials by definition have to include a robot haltingly piecing together its first English sentence?

Somehow I don’t think I’m going to be sticking with this game very long, but as long as I’m here I guess I might as well fucking blow up somebody’s beloved pet, huh? 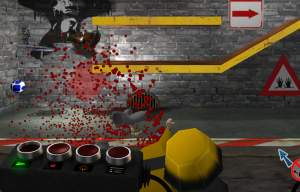 I don’t know what the hell to do so I place some rats and a trampoline and some balloons, and one of the rats explodes on the ground and his head comes off, spinning around with the spinal column flailing behind it and what, in all seriousness, the fuck, is this shit. 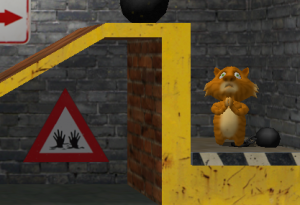 Fun fact: if you take too long to blow the cat into a shower of scorched fur and bone fragments, it will begin to pray for mercy.

HAHAHAHA!! That dumb cat!!!!! He’s so desperate for any kind of comfort at all that he’ll try anything!!!! Anyway, time to kill him!!!!

Or, you know what? Fuck this game.

As a much better game put it, a man chooses…a slave obeys.

I don’t care if the objective is to kill this cat and enjoy the blood geyser. Bad Rats: The Rats’ Sadistic Bloodfuck isn’t convincing me that this needs to be my objective.

This game is crap. It looks and controls like garbage. The endlessly looping soundtrack is that kind of generic guitar music they’d play on sitcoms in the 90s to suggest that those kids with their crazy tunes and their slap bracelets are just so different! 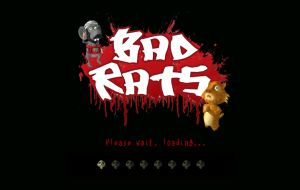 It’s a physics puzzler without reliable physics. I’ve played through one and a half stages, and sometimes the same exact setup works in vastly different ways. I have a feeling I was supposed to solve the first puzzle with something more clever than “pile all the shit on top of all the other shit,” but it worked so fuck it.

The game design is more offensive to me than the concept, even if that concept does involve gutting helpless creatures as they plead for their lives. But as long as that is the concept?

I’d rather not, thanks. I’ve got better things to do with my day than indulge this deranged fantasy. It’s the kind of thing somebody in your eighth grade math class was doodling every day in his notebook.

If you’ll remember, you sat as far away from that kid as possible.

Bad Rats: The Rats’ Revenge
Released: July 20, 2009
Price on Steam: $0.49
Regular Price on Steam: $4.99
Price It Should Be on Steam: The market value of one severed rat-head trailing its spinal column.