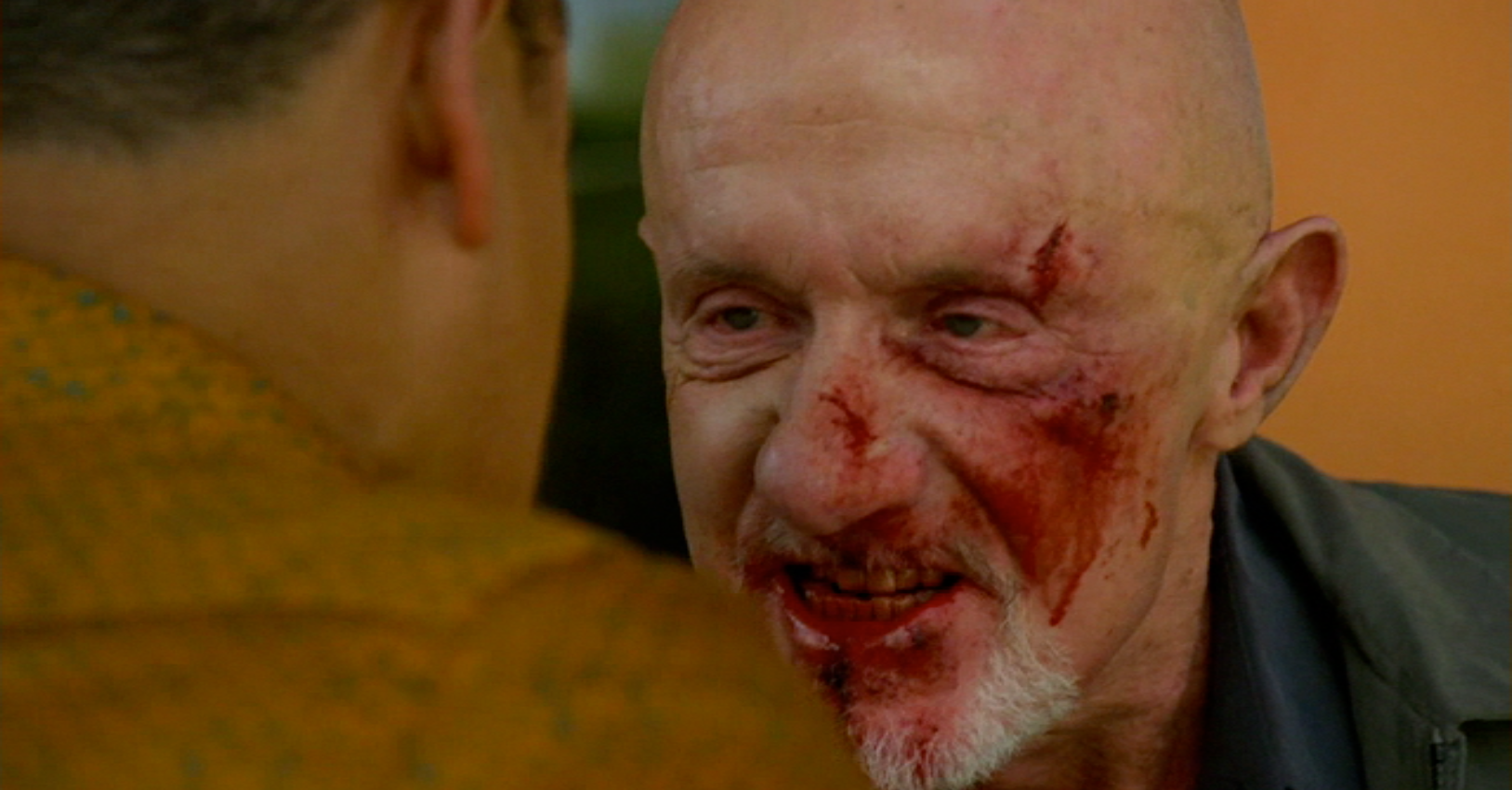 Hey everybody! Better Call Saul is back with a whole new season, and I’m here to…

Yes, back when I was reviewing Better Call Saul in more or less real time, I was still reviewing ALF. And there was a new season of The Venture Bros. And…basically…one of those shows had to forgo coverage, if there was any way I was going to retain my sanity. I ended up choosing — more or less by circumstance — Better Call Saul. There was no right answer, really, but I’ve regretted it ever since.

The show deserves respectful coverage. Prompt coverage may not be as important, but the problem is that I never caught back up with it. I moved on…and then didn’t go back. Until now, at least, when my Facebook wall is flooded with people crowing about Gus Fring being in season three and I figure, well, I might as well catch up with my spoilers.

Part of the reason it was hard to go back, though, was this episode. Not that it was bad. It wasn’t. But the problem was that I watched it. I didn’t have time review it, but I watched it. And after enough time had passed that I couldn’t review it from memory, I didn’t feel very compelled to go back and watch it again.

Shows like Better Call Saul and Breaking Bad are a bit like that. You don’t watch an episode over and over. You enjoy one, and then you enjoy the next, and then the one after that. None of this is to say that the episodes don’t deserve multiple viewings, but I will say that, with some exceptions, multiple viewings don’t benefit them in isolation. They are parts of longer arcs, longer stories, longer passages. Every episode functions like a middle chapter. It keeps the momentum of what came before, and pushes the story just far enough ahead that you don’t feel like you’re wasting your time.

Drop back into one episode you’ve seen — just one, alone — and it feels like a strange excerpt. It almost feels wrong, like eavesdropping on the middle of a conversation.

“Gloves Off” is unquestionably a middle chapter. It makes no secret of that. It picks up where last week left off, and it makes you want to dive right into whatever next week will bring. And yet, it does something interesting: instead of ending the episode with a moment that suggests narrative progress, it opens with it.

That’s not something I’m sure I’ve seen before on this show or on Breaking Bad. Yes, we’ve certainly had plenty of episodes that opened at the end, with the episode itself being a kind of flashback establishing how we got to whatever chaos we’ve just seen. To use a thematically fitting example, there’s “Grilled,” which opens with Jesse’s car bouncing up and down in the aftermath of a gunfight. But this is the first time, I think, that we’ve opened with a major evolution for a character.

In this case, it’s Mike. And what I mean by “major evolution of a character” is that it’s not a question of how his face got bloodied and bruised; it’s a question of how he became the guy who sits alone in the dark, obviously battered, lifting his fist in silent triumph. Sure, we wonder what he’s proud of, but mainly we wonder about the change. About the seeming rewiring of who he is. Mike has been so calm and collected across two shows now* that whenever we see the veneer crack, we know to pay attention. Last season it cracked in a tragic way in the great “Five-O.” Now it cracks in celebration.

But we’ll get to that. This is the Jimmy McGill show; not the Mike show.

Or, rather, it’s Better Call Saul, and “Gloves Off” has a moment of great fun teasing that inevitable change of name for our protagonist. Honestly, isn’t it pretty wonderful that we’re rolling cleanly through season two without the guy’s name even being Saul?

This week Jimmy attempts to seduce Chuck with the offer to abandon his legal ambitions forever. “No more Jimmy McGill, esquire. Poof. Like he never existed.” It’s a cute moment, and I honestly wonder how long they’ll be able to drag out the Jimmy era of Saul’s life. Personally, I’d be kind of happy if it lasted as long as the show does.

The conversation happens because Chuck and Howard seem to have taken Jimmy’s ill-conceived commercial out on Kim, and there’s a lot at play here. (I say “seems to have” because Chuck, unconvincingly, attempts to paint the entire situation as Howard’s decision.) There’s Kim’s nearly blind loyalty to Jimmy, and her obvious questioning of what it’s done to her career. There’s Jimmy’s clear (and almost touching) protectiveness toward Kim, to the point that he’s willing to back out of his career entirely just to put her back where she was.

And, of course, there’s our hero’s relationship with Chuck, which continues to be utterly devastating and painful to watch. (It may even be more painful than Mike’s physical beat-down that ends the episode.) I’m looking forward to seeing just how deeply this show digs into their dynamic, which is believably complex, sad, and toxic. Watching “Gloves Off” the second time I’m able to appreciate how fired up Jimmy is when he arrives at Chuck’s house…only to drop the offense entirely when he sees his brother is suffering.

He brings him water. He brings him an extra space blanket. He sits with him all night. When the morning comes, he makes him tea.

…at which point Chuck takes the offense, and unloads on Jimmy instead.

It’s a deeply sad turn, and one that we know we haven’t seen the last of. Jimmy has always been and always will be the little brother. The fuckup. The one who can’t be trusted…in spite of whatever he achieves, whatever his investigations turn up, however well his plans turn out.

His is a path downward. He’s reminded of that every time he tries to move up. For obvious reasons, it’s always the most painful when it’s his brother pressing him down.

And, sure enough, his commercial was a success. The phones are ringing constantly. A very small financial investment netted Davis & Main, Jimmy’s new employers, a boatload of Sandpiper clients.

But Jimmy didn’t go about it the right way. He went over peoples’ heads. He made a decision that his employers wouldn’t have made. And that’s inexcusable. Throughout the episode there’s a lot of talk of reputation, which clearly means little to Jimmy. He doesn’t care how Davis & Main looks; he cares about the work that they do. The strong implication is that Davis & Main — like Hamlin, Hamlin & McGill — care about how they look. That’s what made all the difference in last season’s “Hero”; sure, Jimmy may have done the work, but he comes off like “the kind of lawyer guilty people hire.”

Jimmy’s playing a game of appearances as though it’s a game of merit. The tragedy isn’t that he loses…the tragedy is that there’s no room for him, and he eventually embraces the flaw he’s been told he had all along. He becomes Saul Goodman.

Mike’s story also has some nice playfulness. There’s the return of Krazy-8, who would eventually be Walt’s first deliberate murder victim in Breaking Bad. There’s Mike taking a “trophy” from a defeated Tuco, just as Hank will eventually do. And there’s Mike warning Nacho that if he bumps off Tuco, it’ll draw Salamancas like flies…which is indeed what happens when Tuco is bumped off in that other show.

But it’s not a playful story overall. It’s the story of how retired-policeman Mike becomes hyper-competent-fixer Mike. And that’s what he’s celebrating on his couch at the beginning…covered in his own blood…face swollen…Tuco’s charm in his fist. He’s celebrating the fact that he did something his way…and that his way worked. He’s suspected that he could do this before — for the memory of his son, for his daughter-in-law, for his granddaughter — but now he knows.

And he can do it, for now at least, without being blood thirsty. Without stirring up undue trouble. Without taking lives. He can do it on his terms…which is all he asks.

…and which will also lead him down a much darker path when those terms are forbidden to him, one by one.

In theory, his non-fatal solution to the Tuco problem might set the stage for the mercy he shows Walt several times over in Breaking Bad. He let Tuco live, and still solved the problem. In Breaking Bad he lets Walt live…but things go a bit differently there.

His confrontation with Tuco here is an easy highlight of both shows. It’s a perfectly tense several minutes of television, with Mike working Tuco effortlessly. Playing the dim old man when he knows it’ll anger him the most, shifting into antagonism when he needs to keep Tuco’s ire up, and then shifting right back into playing the helpless elder to keep Tuco from suspecting anything.

It’s a masterful, incredible scene…one that makes you admire both Mike’s cleverness and Better Call Saul‘s. And I have to admit there’s a fantastic, unspoken narrative brilliance in the ultimate solution. When the initial plan involves Mike killing Tuco, the recurring concern is how Mike will get away unseen. The brilliance is that the plan Mike ultimately comes up with turns that problem into its own solution: he leans into the fact that he will be seen, and we get a much better, much stronger, much more intelligent sequence because of it.

We never do see what happens when Jimmy shows up late to work, or if Kim gets wished back out of the cornfield, or what the next inevitable cloud of fallout from the commercial turns out to be…at least not this week. But that’s okay, because it’s just a middle chapter. And nothing that might have happened in those threads could have compared to Nacho’s weighty, episode-ending query:

“You went a long way to not pull that trigger. Why?”

Mike doesn’t answer him, and so we don’t get the answer, either.

But I think we all know the answer.

The answer is that he went the long way around to see if he could do things his way. Not Nacho’s, not Tuco’s, but his own.

And one of modern television’s best characters is born.

Note: I want to point out that I didn’t just stop reviewing Better Call Saul; I stopped watching it as well. Yes, I saw “Gloves Off,” but after that…nothing. I wanted to wait, because I knew I’d be coming back to this series. And now, hey, I am back! So please steer clear of major story spoilers in the comments. For you, this season is almost a year old. But I’m watching it for the first time, and I hope you enjoy that these reviews will still retain their “by-the-episode” approach as opposed to one that looks backward with a greater sense of where these threads lead.

—–
* During my ALF reviews, I mentioned that Todd Susman, who appeared in the episode “Hide Away,” played the P.A. voice in both M*A*S*H and Futurama, making him one of very few people who got to play the same character in two of the best shows ever made. I think we can add Jonathan Banks and Bob Odenkirk to that short list as well.