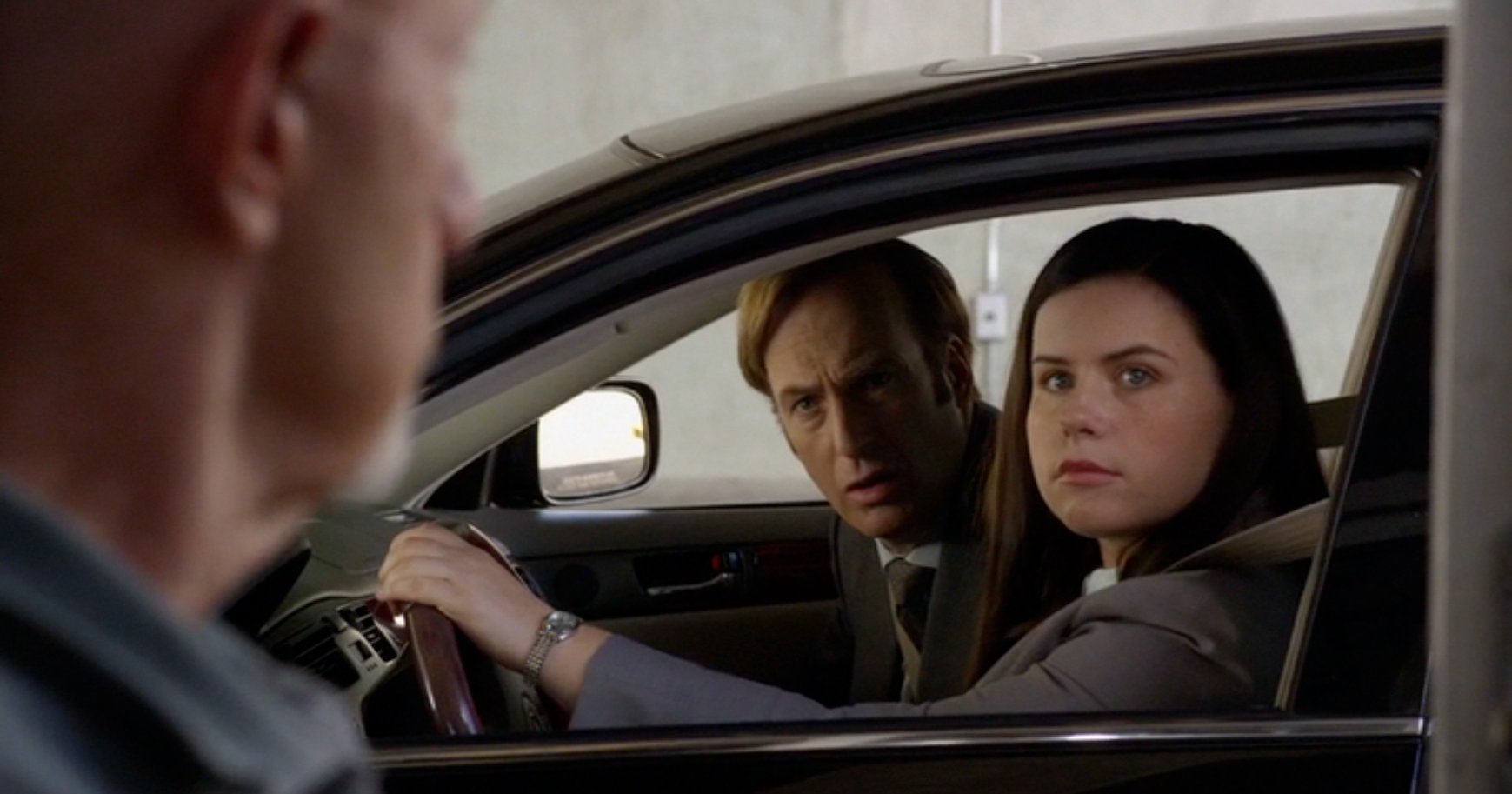 As the episode titles for season two rolled out, this is the one that interested me most. After all, it’s the name of a character we haven’t met yet. That’s intriguing. Is she a client? One of Saul’s eventual ex-wives? A friend or rival who makes a return and further upsets Jimmy’s stability? Whoever she is, she’s all at once important enough to have an episode named after her. That’s exciting. It suggests a force, a presence that means something to these characters and yet hasn’t even been mentioned before.

Interestingly enough, I thought immediately of the female colleague of Jimmy’s we’d seen a few times already. If she had been given a name, I didn’t remember it. Perhaps she was Rebecca? Either way, something about that colleague stood out to me. I was able to tell that she was going to be important at some point. Something about her — whether it was some way the camera lingered on her or just an infectious confidence on the part of the actress — tipped me off to the fact that this character, whoever she was, meant something. My quiet guess at the time was that she’d become an eventual rival for Jimmy’s affections…either forcing Kim out or encouraging her to hold onto him that much more tightly.

I was wrong on all counts. Her name is Erin, and it’s pretty doubtful after this week that there will be anything even remotely resembling romantic chemistry between her and Jimmy. But, coincidentally, “Rebecca” is the episode that indeed affirms her importance.

And I’m glad, because my God is Erin great. In fact, she makes more of an impact than Rebecca does, and adds a potentially interesting — though surely temporary — wrinkle to Jimmy’s story.

Okay, so: who is Rebecca?

It turns out it’s Chuck’s wife. Presumable ex-wife, though I can’t remember if a divorce (or death) has specifically been mentioned in the past. I suspect it hasn’t been and, for now at least, it’s possible they are only separated. (Is anyone out there sharp-eyed enough to have noticed the presence or absence of a ring on Chuck?) Now that I’ve seen the episode and I know this, I’m not entirely sure I know why “Rebecca” bears her name.

Is Rebecca that important to Chuck? To Jimmy? Certainly if she passed away or left Chuck at the height of his love for her or something, it would sting. But is the implication here that Rebecca (like the title character of Hitchcock’s Rebecca) a haunting, unforgettable presence for Chuck that affects the way he lives his life?

I don’t know. I certainly wouldn’t have guessed that — or anything like that — to be the case, but we’ll see how things play out. As of right now it feels like a bit of left-field revelation, but I think it’s safe to say that her absence, whatever the reason behind that absence, ties directly into Chuck’s eventual breakdown and electrical paranoia.

One thing we certainly do learn from the flashback that opens the episode, though, is that people like Jimmy…and Chuck envies this. Even his beloved Rebecca succumbs to the charms of Chuck’s fuckup younger brother…the younger brother she was specifically warned against…the younger brother he gave her a signal to use if she wanted him out of the house. She never uses it. He’s silently appalled.

Then there’s Kim. There’s Clifford. There’s even their father, Charles Sr. People like Jimmy. And as much as the boy looks up to his big brother Chuck, it’s Chuck himself who truly feels jealous.

And this — okay, I realize I’m jumping around a lot, but bear with me — really comes to the fore in the great scene he shares with Kim toward the end of the episode. It’s here that we learn about Charles Sr…and the fact that Jimmy singlehandedly and underhandedly sunk his business. Or…did he? “Rebecca” contains one flashback, and this isn’t it; this is just Chuck, in a chair, speaking to Kim. He has his own motives. Many of which we can guess. Others we can infer. And he’s already reminded us of the fact that he’s a bit of a dick, as he sent Kim off to make him coffee after she’d been working all night.

So…did Jimmy sink the family business? Even Charles Sr. didn’t think so. The only word we have to go on is Chuck’s, and Chuck works hard to poison others’ views of Jimmy. He did it with Howard, he did it with Rebecca…and now he’s doing it with Kim.

There are two possible reasons for that, and they’re opposites; either Jimmy is truly a dangerous individual that people should be warned against, or Jimmy’s a good guy at heart and Chuck is refusing to let him get ahead.

As with last week’s episode, though, “Rebecca” isn’t really about Jimmy. At least, not directly or primarily. Last week was Mike’s story. This week it’s Kim’s. And while I’ll get to Kim a moment, I do want to say that I’m slightly disappointed that Jimmy got sidelined this week. In “Gloves Off” that was okay, because his story was just spinning its wheels for a bit, and Mike had the more interesting development.

In “Rebecca,” though, Jimmy’s bristling tether to Erin — his unofficial, Davis & Main-appointed babysitter — has some real and very interesting potential. This isn’t a story that I want to see sidelined, and I hope we get more of it in the weeks to come. Jessie Ennis was a delight, and serving as Jimmy’s anthropomorphized ankle monitor gives her a narrative purpose that is bursting with both comic potential and comic tension. I don’t think she should be in the driver’s seat forever, but I think it could either lead to a great arc of its own or add some unexpected complications to his current arc.

Anyway, yes, “Rebecca” is actually about Kim, but Rebecca and Kim have a fair bit in common. They each receive a lecture about Jimmy from Chuck. They each fail to see, understand, or at least acknowledge what Chuck is warning them about. (Though this is likely to change for Kim and may eventually have changed with Rebecca.) They’re both being held back, potentially, by an underperforming colleague.

In both of those cases, Chuck encourages them to cut that colleague out of their lives. To move forward without them. To refuse to be held back. And yet we know — better than any other character knows — the loneliness Chuck faces as a direct result of living by that rule.

The only question is, has he?

Kim’s talk with Chuck is great, largely due to the acting but also due to the deft writing, which sees the entire conversation spring from a question Chuck doesn’t even answer. Kim asks if she has a future at Hamlin, Hamlin & McGill. Chuck clearly has some insight here, but prefers to enlighten her about something else. Even if she realizes she’s been deflected — and she probably does — she clearly believes Chuck has a point.

We talked a bit in the last review about Jimmy being constantly reminded of his place in the universe, being shoved back down whenever he tries to climb up. “Rebecca” shows us that it’s not just Jimmy; it’s Kim, too. Hell, it might be everyone.

This week Kim works alone, on her own time, foregoing lunch and sleep, just to find, of her own initiative, a client or a case large enough for Hamlin, Hamlin & McGill to remember her value.

…and she does it.

Her hard work pays off. For the firm, at least. It doesn’t pay off for her, as she receives the same kind of fuck-you Howard gave Jimmy way back at his party in season one’s “RICO.” She’s in exile. She’s there because that’s where the people with power put her. And while she may not be there forever, it’s sure as hell not her decision when she’ll be welcomed back.

If it happens, it will be on somebody else’s terms.

No hard feelings, right? Now get back to work.

It’s a devastating moment. Almost as devastating as her treatment of Jimmy earlier in the episode, when he reaches out to her with a potential legal solution to the retaliation she’s facing…and she pushes him away. He’s willing to help, and she declines the help. Which is when he tells her he’s willing to leave his job for her.

…and she declines that, too.

In fact, she doesn’t even think it’s much of a gesture. And who can blame her? The Davis & Main opportunity was narrative convenience more than anything, right? It kept Jimmy employed, kept the show going, gave him a chance to show us how he works in more respectable environs…but, ultimately, it’s there to be thrown away. Right? We know he doesn’t work there forever. Hell, we know what he knows and what Kim knows: it’s a job for him to throw away when throwing it away will advance the story.

Except that later in this episode, he realizes that that’s not what it is at all. He bumps into a fellow attorney from his old days as a public defender, and slowly, reluctantly, gets drawn into a conversation that forces him to realize just how lucky he is. Just how important this job is. Just how much of a gift he’s been given.

And he was going to throw it away?

Is that some indication of the price of Jimmy’s soul? Career advancement over chivalry? Perhaps, but we do get a very clear idea of the price of Mike’s, as Hector Salamanca offers him $5,000 to take the rap for the gun that was found on the site of his and Tuco’s scuffle.

It turns out that Mike’s clean solution wasn’t clean at all…which was sort of the theme of Breaking Bad as well. Every action has consequences. You will deal with them for many episode, or even for many seasons. And you’ll always be able to trace every terrible development to the one that came before, right down the line, all the way back to the first time that you decided to do something you knew — you already knew — you shouldn’t have done.

The best laid plans of Mike and men, etc. etc.

We have some sense of where this will go — where it must go — but it has the potential to offer a few surprises, especially since we know that the Hector we meet here is not at all the Hector we will later encounter in Breaking Bad. Mike isn’t the only character in for a dramatic change.

I liked “Rebecca.” In some ways it felt like a lesser episode, but it had enough to recommend it, and my biggest complaint is that we didn’t get more of one plot thread. Hell, we might get more of it next week, so it may not even matter.

But I will say that it’s a bit odd that, this far into the show, Mike’s story and Jimmy’s still don’t really overlap.

I’m not complaining, but I do think it’s fair to say that this is only something the show can get away with due to our familiarity with Breaking Bad. On its own merits, Better Call Saul can usually hold its own, but this is a case in which it simply doesn’t. Without the parent show, there’d be no real excuse for a weekly drama series in which two separate protagonists bumble around for seasons on end in almost exclusively unrelated adventures.

It’s the one area of Better Call Saul in which the seams are showing. And they’re probably only showing because just about everything else the show does, it does perfectly.