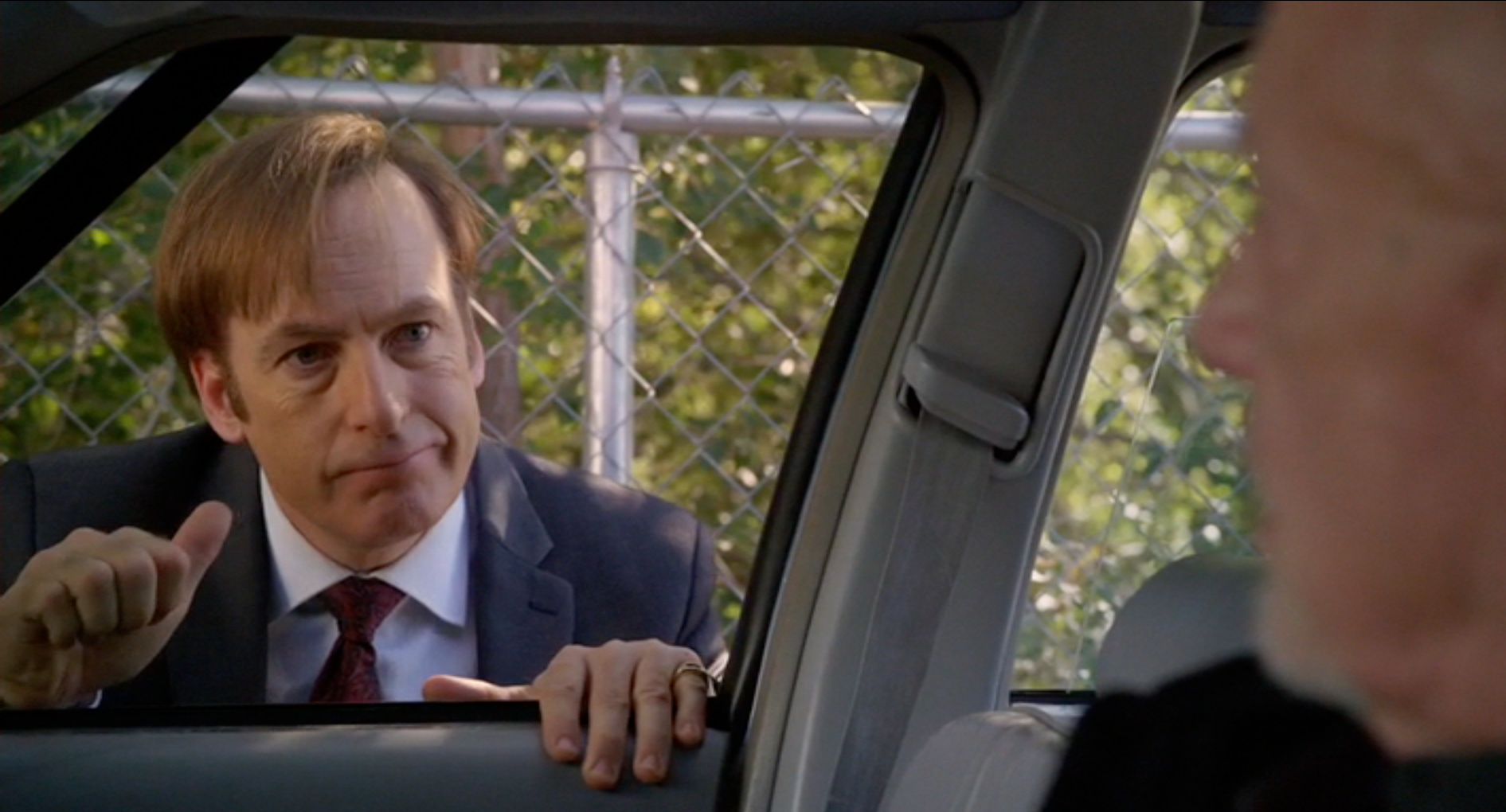 Better Call Saul is a great show, and “Witness” assuaged my quiet worry that it soon wouldn’t be.

This was among the most effective hours of television I think I’ve ever seen, maybe because of how effortlessly it pivots at about its midpoint from being one of the funniest episodes to being one of the most painful.

Most great television episodes do something very well. “Witness,” though, does two quite different things very well. It almost feels as though it’s two separate half hours that just happened to air back to back, which in this very specific case I mean as an enormous compliment.

“Witness” isn’t aimless or confused; “Witness” is artful and layered. It isolates the main components of its delicate comedy-drama balance, which allows each half to breathe, to function, to hit us hardest.

I loved this episode.

So why was I afraid I wouldn’t?

Well, as you know if you’ve been reading these reviews, I’m a day or so behind on new episodes. I don’t have cable, so I buy the seasons through iTunes. I don’t get to watch a new Better Call Saul until everyone else has already seen it.

Potentially this could end in me getting pretty majorly spoiled. I don’t mind spoilers, per se, and I think the panic and offense they engender is more or less totally unfounded, but I still like to go into things knowing as little as possible ahead of time.

So, what do I do? I tell my readers — and my friends — that I’m behind. I ask them politely not to spoil anything for me. And because I have excellent readers and friends, they don’t spoil anything for me. I get to experience things fresh. I don’t even know ahead of time if an episode is any good, and I appreciate that. I asked for a small gesture of respect, and everyone’s given it to me.

That frustrates and worries me. I’ll get to the worry bit in a moment, but I’m sure you can guess why it’s frustrating.

I don’t like to know what’s coming next. I don’t think it ruins the experience, but it does change it. Watching a show with only your own guesses as to what’s coming is a different experience from watching it knowing what’s coming, and anticipating it.

Wouldn’t it have been better, in a word, if Gus Fring’s reappearance had been kept mum? Wouldn’t the slow reveal of the Los Pollos Hermanos sign been more thrilling? Wouldn’t the artful lack of focus on the man as he swept the floor behind Jimmy felt more purposeful?

I ask not to be spoiled because I want to enjoy the show more, but the network airing the show and the people making the show can’t shut up about it. Fring is coming back. Fring will return in season three. Fring will be back early in the season. Don’t forget; tonight is the night Fring returns. Unscramble the first letters of season two’s titles and they spell BEND OVER HERE FRING COMES AGAIN.

Hitchcock famously wouldn’t allow late seating when Psycho was in theaters, and he personally asked audiences not to share plot details with those who hadn’t seen it. If the Better Call Saul marketing team were in charge of that film, the trailers would have provided a precise timestamp, letting you know exactly when you’d need to show up to see Norman Bates in his mother’s dress.

Two immediate points of comparison, I think, prove the rule. The first would be the legitimate surprise appearance of Tuco at the end of this show’s very first episode. I was a night behind then, as well, and nobody spoiled it. When he stuck a gun in Jimmy’s face, I felt the shock. Had I known he was coming I could have still enjoyed it, but that initial rush would have been replaced with something less…thrilling.

Then there’s this episode’s other surprise emissary* from Breaking Bad: Francesca. No promotional materials spoiled her return that I saw, and so, ironically, her appearance had infinitely more weight than the (clearly more important) arrival of Gus Fring.

I have to admit, I never expected to be so happy to see Francesca again. Not that I disliked her in Breaking Bad at all; I think she just didn’t stand out as a singular character there. Watching her get her feet wet — and develop the sad loyalty to Jimmy that will keep her by his side through a name change and the ultimate dissolution of his career — makes me very excited to have her back. There’s a journey there that I didn’t expect I’d ever care to see, and now my mind is reeling with possibilities.

Also, at this point, can Huell and Kuby be far behind? Not that I’m in a rush to get anywhere (Better Call Saul‘s glacial pace is genuinely its greatest asset) but I’ll be very happy to see them again.

Now let me frustrate you by framing much of what I just celebrated as a concern.

“Witness” — prior to air — worried me because I don’t want Better Call Saul to become Breaking Bad. Having Tuco or Krazy-8 pop up is fine. Hell, bring in more characters whenever there’s a natural and compelling reason for them to be there. I don’t even care if folks pop up just for the novelty of it, as the Cousins seemed to last season.

But by folding these characters into the proceedings — by making them important to this show, to what happens, to the stories being told — we blur the lines between Better Call Saul and its predecessor. And that’s not fair to Better Call Saul.

We had Saul and Mike, of course. Those two, from episode one, were to be our parallel leads. And that’s okay. Because otherwise, the important characters were all new. Kim. Chuck. Howard. Nacho. Any number of new clients, flames, and foils. Better Call Saul occupied the same universe, but charted different territory. It was its own experience, and it could toss a saucy wink at its parent series whenever it damned well pleased; Better Call Saul would still live or die on its own merits.

…until it decides that, no, it won’t.

And Better Call Saul deserves so much more than that. It deserves independent appraisal. Over the course of two seasons and change it’s earned independent appraisal. Bob Odenkirk is doing incredible work as Jimmy McGill, and it’s work that is entirely distinct from his work as Saul Goodman. It’s a different character. It’s a unique performance. It’s nuanced and impressive in a way that Saul Goodman — as great as he was — was not.

Rhea Seehorn is, on a weekly basis, the best thing on television. Michael McKean is an unexpectedly impressive and heartbreaking dramatic presence. Dave Porter, the composer of both shows, regularly makes the most of Better Call Saul‘s long, wordless stretches, filling his sonic canvas with compositions that in themselves tell the story, hand over fist outdoing his already great work on Breaking Bad.

In short, Better Call Saul is something wonderful…and it’s painful to see it seemingly want to become something else…something that’s already been and gone…something we’ve already seen. I don’t want the marketing to be all about Gus and Los Pollos Hermanos, because those things don’t belong to Better Call Saul. Those belong to Breaking Bad. And, frankly, I’d rather spend time here.

I worried about how much Gus dominated discussions about the show, because I don’t want to lose Jimmy to Saul. Not yet. Not when we’re still telling what I truly believe is an important story about these characters. Do we really need to carve out more of its runtime for those whose stories we already know?

That might also be why the return of Francesca doesn’t worry me. Or why the hypothetical return of Huell and Kuby doesn’t worry me. Those aren’t stories we know. We met the characters, but never got more than a rough sense of who they were. There’s a lot to learn.

How much more is there to learn about Gus?

“Witness” doesn’t answer that. At least not directly. But it does reassure us, and it does so by its sheer quality. Better Call Saul can still be great, can still be unique, can still be independently brilliant…even if it is saddled more and more by the weight of the legendary show that came before.

I’m still not convinced we needed Gus back. But I think I am convinced that Better Call Saul is going to retain its identity, and not become The Young Chicken Man Chronicles.

Anyway, some smaller thoughts on the episode itself, rather than what it does or doesn’t suggest for the future of the series as a whole.

I had no idea last week what Chuck’s plan was, but a friend of mine guessed it beat for beat. Great job, Keith! I’m an idiot!

I honestly thought that Ernesto hearing the tape was accidental, but my friend saw it as deliberate from the start. And, sure enough, he also predicted that the plan was to catch Jimmy breaking and entering to get it back. I have to admit, I’m impressed at how well Better Call Saul laid those tracks when I wasn’t looking; Chuck already knew Ernesto was loyal to Jimmy, and all he really had to do was get the boy worried. The rest of the plan unfolded naturally from there, and that was a pretty beautiful thing.

And I loved Kim demanding money from Jimmy so that she’d be his lawyer and everything they discuss would be confidential. That’s a trick Saul later pulls on Walt and Jesse in Breaking Bad. (Funnily enough, in the episode “Better Call Saul,” if I remember correctly.) It’s interesting to see something Jimmy learned from a true friend who cares for him and his safety eventually becomes a tool in his arsenal of shysterism.

Mike’s story doesn’t go far this time, but the fact that he teams up with Jimmy just serves as a reminder of how much we benefit as viewers when these two actually share screentime. Jimmy’s silent — and clumsy — surveillance inside the restaurant was a setpiece of perfect comic tension. Ditto Mike kicking him out of the car when an amped-up Jimmy wants to keep playing spy.

Hell, even the initial suggestion that Mike and Jimmy might work together led to a huge laugh. (“This one really don’t want to talk about Cracker Barrel.”)

Better Call Saul has life in it. A real life. A life worth exploring.

And I hope, deeply, that it does a better job of escaping the shadow of its celebrated older brother than Jimmy does.

—–
* Okay, we saw Victor as well, and that was cool, but since we knew Gus was coming, that didn’t feel as surprising. Once we know Dorothy is skipping down the Yellow Brick Road, is anyone surprised that Toto shows up, too?