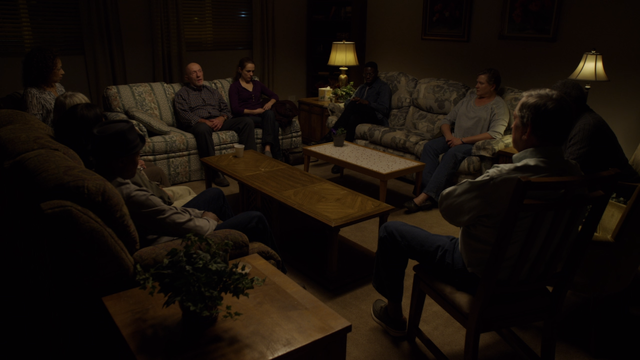 Better Call Saul might cheat a little when “Talk” sticks Jimmy in a cellphone store that’s completely devoid of customers, but it makes its point. Or rather Jimmy, classic film aficionado, makes it when he spends his first day on the job bouncing a ball onto the floor, then the wall, then catching it, over and over again. He’s imitating Steve McQueen when he gets sent to the cooler in The Great Escape. Jimmy sees legitimate employment as imprisonment.

That’s why, in the past two episodes, we saw him decline a job offer but then set into motion a plan to break into that workplace and steal a Hummel figurine. Sure, the figurine earned him more than he would have possibly made for a night’s work at a legitimate job, but that’s beside the point. (He even dismisses the money Chuck left him, which was a similar amount, as paltry.) What matters is that the thrill of doing something wrong is what he enjoys.

I was surprised last week that Ira didn’t give Jimmy shit for miring him in a dangerous situation, but I probably shouldn’t have been. Ira loves this stuff, too. They each need to make some money above board, but that’s not where their heart is, or where it could ever be. The dollars are nice. The fact that they don’t have to work soul-sucking 9-to-5s to make those dollars is nicer.

Jimmy will spend his money and never think about it again. But he’s always going to remember showing up in the middle of the night to release the parking break on somebody’s car so Ira could get out of the office. That’s what mattered. Life isn’t money. Life is experience.

And so, here, when Jimmy gets the bright idea to prey on criminal paranoia to drive traffic to his store, sure, we’re getting a glimpse of Saul. But we’re also fleshing out the Jimmy we already know. Whether he’s digging through dumpsters to help a client or buying up commercial airtime without permission to help his law firm, Jimmy bucks tradition.

Previously, it was easy to see why he’d do this; his bosses and associates might bristle, but in each case his gambit worked. Jimmy has a knack for knowing when a shakeup is warranted, whereas most of the professionals in his universe don’t.

But now, with “Talk,” I think I have a greater sense of why he behaved that way in earlier episodes. The fact that his gambits were successful might only be incidental. What really mattered is that doing things by the book bores the shit out of him. Jimmy’s shakeups were necessary to keep him interested. The moment things settle into routine, Jimmy starts bouncing that ball, wondering how the fuck to break out.

I’ll bet right now that his latest window-painting gambit will work. And I’ll bet even more confidently that Jimmy couldn’t care less. His thrill is painting the windows without permission in the first place. He knows this isn’t what anyone else in his position would do. That’s why he does it.

“Talk” is probably my favorite episode of this season so far. It isn’t the funniest, the most exciting, the smartest, or even the most interesting episode. But it’s very successful at revealing character, and helping us to understand the things we’ve already seen.

And that, I think, is a bit of a passive theme here, as evidenced by the scene that gives this episode its name.

I’ve complained about Mike’s unclear role in this show, and I could do it again. (In fact, I’m sure I will!) But “Talk” used him exceedingly well.

We open with a scene that is both a flashback and a flashforward. First, we see an out-of-focus man sawing wood and laying concrete. In a bit, a child gets to scrawl his name before it dries. The angle changes, and we see that the kid is Matty…Mike’s son. We just saw Mike and his little boy. Then we flash forward, beyond most of the events we’re about to see happen in “Talk,” to Mike at his church group.

What story did he tell? We’re led to believe it had something to do with the flashback…and it did, but not in the way we probably expected.

Mike isn’t the kind of person to open up to anyone, least of all in a group setting. But whatever he said shocked or disturbed the group into silence.

And, well…why not? Mike must have a thousand true stories that would shock a church group. We aren’t surprised that he’s left a room speechless. We just don’t know what he chose to share.

It takes most of the episode to get us back to that point, and we see finally that he didn’t share anything at all. The flashback wasn’t something he shared; it was something he felt. His daughter-in-law speaks to the group about her fear that she’ll forget Matty. Her late husband. Mike’s son.

So when another member of the group jumps in with his own sad tale of loss, which Mike knows to be fabricated, Mike presses and humiliates him to the point that the man leaves the group, likely for good. (Though Mike isn’t any more likely to come back, I think.)

We started the episode with the suggestion that Mike opened up. We find out later that he kept himself closed as tight as ever, and took out his frustrations on, yes, a liar…but a liar who wasn’t hurting anybody.

Between these two scenes, Mike makes a friendly wager with Anita — someone who seems to be a genuine friend to him — that the man’s stories are bullshit. It’s a sweet moment. It’s actually pretty cute. Mike and Anita make plans to spend time together after the group, and they’re both on the lookout for inconsistencies in the next sob story. This should be fun.

It isn’t fun. Mike gets hurt when the story of his actual son is hijacked, and he ends up in turn hurting a man who was there for support.

We met Anita last season, and in my review for “Expenses,” I said this:

[Mike] bonds with another parishioner, and we see a side of him we’ve never seen before, on either show: Mike with a real friend. […] He lets her help pour concrete, and later listens intently to her story of her missing husband. He opens himself up to her — and to the church — in an unexpectedly warm way. He lets his guard down. He accepts help. He accepts…others. It’s a different Mike. It’s a Mike he might even like being. But it’s not the Mike we lose in Breaking Bad. We know he pushes it away.

“Talk” is the specific episode in which he pushes it away. He takes what could have been an important relationship in his life (take “relationship” in whichever way you like) and destroys it, likely permanently.

His new friend. A group of people willing to support him. A church he was actively helping.

This isn’t Mike. At least, it isn’t the Mike we know. Just like Jimmy isn’t the Saul we know.

These characters are making the decisions that separate them from who they could have been. They each have the opportunity to say, “I’m going to do this right.” And then they each, independently, decide to do this wrong.

Mike and Jimmy have comically little overlap in terms of plot. But in terms of their characters’ journeys, they’re sometimes eerily similar.