It’s finally happened…Denver has Moonrise Kingdom. And while I’m sure it will take me several more viewings to really formulate a thorough opinion, I can confidently say this much: it was worth waiting for.

The plot, as everybody knows by now, is that two lonesome youngsters named Sam and Suzy fall in love and take off together, as a massive storm brews and the small town becomes increasingly desperate to find them. Because I’d like to keep this review relatively spoiler free, I won’t say much more than that. I do say “relatively,” though, so if you’d like to remain totally unspoiled, stop reading now…and just know that, yes, it’s a film worth experiencing.

Moonrise Kingdom is a strange film…it both feels like a Wes Anderson film and yet stands pretty uniquely among them. Part of this might be due to the fact that he focused the film completely on a pair of unknowns — the first time he’s done that since Bottle Rocket — and sidelined the few regular collaborators that do appear. This movie very distinctly belongs to Sam and Suzy…and that does leave me with mixed emotions, though they are almost uniformly positive. 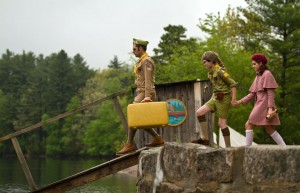 The two young actors — Jared Gilman and Kara Hayward — are each fantastic finds. Gilman in particular does an excellent job of portraying Sam as a young man who’s not necessarily wise beyond his years, but certainly troubled beyond them. He’s guileless and without any sort of malice whatsoever…which is both why he becomes an easy target to his fellow scouts, and eventually earns their sympathy.

Hayward’s work here is much more subtle — especially as her more manic moments all occur offscreen, thanks to some artful editing — but ultimately Suzy comes across as someone who alternates seamlessly and immediately between frightened and frightening.

Between them, the two leads do most of the emotional heavy lifting…though it’s almost as though Anderson doesn’t quite trust them to handle the load (more on that later). Regardless, Moonrise Kingdom contains its expected share of painful exchanges, revealing character not by what they say and do, but by what they fail to say and restrict themselves from doing.

One particularly intelligent choice on Anderson’s part was to provide us with information that each of these children, separately, is seen by others as being emotionally disturbed. The intelligent choice is to actually bear that out in how they act and react in their various adventures; this isn’t a case of adults failing to understand their children…this is a case of adults correctly assessing the fact that their children have problems, but not knowing how to handle them. 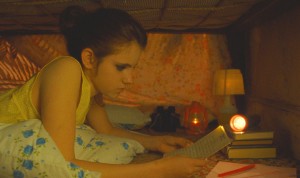 Suzy, for example, is prone to violent outbursts. It’s completely at odds with her conservative dress and meticulously composed hair and makeup, but it’s always there in her eyes…a lurking, relentless darkness that prevents her from ever feeling at ease. One of Hayward’s best scenes in the film is one in which we can’t hear her…an outburst at her family in the middle of dinner. We catch her in mid eruption, and though we can’t hear a word she’s saying, that’s not important. What’s important is that she can’t contain her anger — which may or may not even have definition — and also that her family sits quietly, absorbing it, not reacting. They don’t know how to handle their daughter…and therefore cannot help her.

Sam’s issues are rooted a little more deeply, and are therefore that much more obscured. He is an orphan who has not recovered from the deaths of his parents, and he wears his mother’s brooch like an exposed scar. At one point he confesses to having committed arson while sleepwalking…and he got in trouble for it because nobody believed he was actually asleep. What neither Sam nor Suzy understands is that it doesn’t matter whether or not he was asleep…either way, he needs help that is not being offered to him. 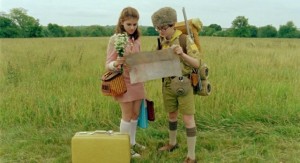 But the two understand each other, and the two accept each other, and those are things that neither has ever really felt they’ve had before. They each come burdened with baggage, but they’re not judgmental of each other. In fact, Sam takes great pains to transport all of Suzy’s overloaded luggage along with them, regardless of the trouble it causes him to do so. In a clever inversion of the moral of The Darjeeling Limited, which requires each of the brothers to leave their accumulated baggage behind, Sam embraces Suzy’s, understands that that’s who she is, and is always careful to let her know that he’s comfortable with that.

Of course, the two are each living in a fantasy of their own devising. Why this works, however, and why we root for them, is that these fantasies are compatible. Suzy wishes to be swept away, and Sam wishes to sweep away. It gets them each where they think they need to be, and it’s a seductive combination. As short-sighted as their plan really is (tellingly, Suzy only borrows her brother’s record player for 10 days), we want this for them. After all…what else do they have?

One line that many reviewers seem to latch onto as a pretty clear distillation of the film is what Sam says to Suzy when she tells him she’s envious of the fact that his parents are dead. “I love you,” he says, “but you don’t know what you’re talking about.”

Personally, I think the defining moment came for me when, early in the film, Suzy asks about a recently deceased dog that Sam used to know. “Was he a good dog?” she asks. Sam, more sagely than he realizes, replies, “Who’s to say?” 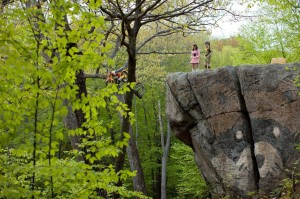 It’s a very Anderson-like response, tapping into very Anderson-like themes. Who is to say? We all view ourselves in some way, but, if that’s not what the world sees, then what does it matter? Who are we? Are we the people we try to be? Or are we the people everyone else believes us to be? What are we? What defines our identities? Or, to phrase it in the parlance of this film, what kinds of birds are we?

Moonrise Kingdom catches the protagonists at a pivotal point in their lives, during which the promise of a magical future has yet to die and become the lingering echo that haunts the Tenenbaum family, or Team Zissou. For Sam and Suzy, whatever the future may actually turn out to hold, there is still time.

For the other characters in the film, there’s less time. The major adult characters are resigned to their roles, to their failings, and to their fates. Bill Murray’s character expresses exactly one wish in the film, and that’s for the storm to pull the roof from his house and suck him into space, because his family would be better off without him. It’s a fantastic line perfectly delivered, and it conveys a concentrated lifetime’s worth of disappointment.

There’s more I could say about this film. Maybe, eventually, I will. But, for now, I’ll move on to the very small complaints I think I have after one viewing, which will likely be totally erased after another few, if history is any example.

For starters, this is absolutely Anderson’s most overtly comic film. Jokes and sight gags are packed into these scenes, and they often dominate. It’s not a bad approach, but it’s certainly somewhat jarring for Anderson to be chasing the more obvious laughs, and I almost wonder if it’s because he didn’t trust his young leads to handle the emotion on their own. By undercutting himself and giving the audience a chance to relax into a more comfortable form of humor, he is lightening the loads that his protagonists actually have to carry. It’s a noticeably unrestrained variation on his typical approach, and while I don’t think it hurt the impact of the film, it did seem to make it feel unfocused at times. 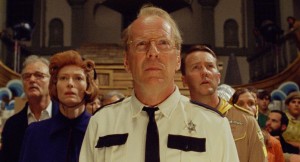 Also, I’m not entirely sure that any characters outside of Sam and Suzy experienced any clear growth. The film suggests that they did, or at least that some of them did, but it would have been nice to spend more time with them along the way, and perhaps come to understand precisely how they’ve changed, and exactly why that’s important. Then again, as my girlfriend correctly put it, Anderson isn’t one to dwell on information he doesn’t think we need, and we, as members of the audience, should be meeting him at least halfway. For now, however, after one viewing, I feel as though Captain Sharp and Scoutmaster Ward had their most impressive moments when the cameras weren’t on them.

Overall, though, I loved it. At the end of the film I wasn’t sure what I thought, but by the time the credits ended I was already cycling through dozens of conflicting emotions, and I still am right now, as I write this. Moonrise Kingdom left a mark. I don’t know what that mark is, just as none of the other children understood their compulsion to listen to Suzy read from her stolen library books. It’s a story, and it means something to them. They might not know what. They don’t mind. The experience of feeling it unfold is the reward.

Moonrise Kingdom unfolds in enormously satisfying ways. And it’s okay if you feel a little bit confused…young love has that effect on people.