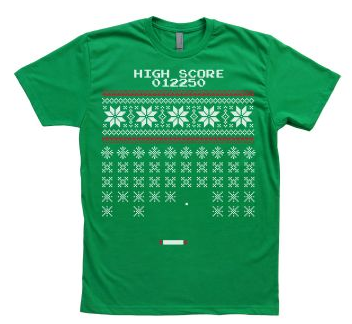 I’ll get this out of the way right up front, since I don’t usually review clothing on this site: I received this T-shirt in exchange for writing a review. No additional compensation was offered, and I wouldn’t have accepted it anyway…it was simply a nice opportunity to GET FREE THINGS so, in the spirit of Christmas, I jumped on it.

Okay, so, I also jumped on it because I thought it was genuinely pretty awesome. T-shirts.com offered me the item of my choice from their selection of 8-bit Christmas shirts, and the minimalist in me was definitely interested in those designs.

I chose the Breakout homage pictured above (amusingly called “Flakeout” on the site). My personal favorite design is actually this great tribute to Donkey Kong, but a coworker of mine bought that one for himself and I didn’t want to look like twins. (That’s what a twin is, right? Someone who owns the same T-shirt?)

In honesty, though, I like the simplicity of the design I chose. Gaming has so few universally recognizable symbols, tiny visual cues that transcend their origins. I’d say the Pac-Man ghosts would be one…a space invader…and not much else, really. The Breakout paddle comes pretty close, though, and I like the double-take that the better designs here inspire. The Donkey Kong one is nice, but visually complicated, which means people will know to take the time to figure it out. The others, I think, are more pleasingly subtle.

Anyway, the review is bound to be brief, as there’s not much to say about a T-shirt. I received it promptly, which is obviously a good thing, but when I opened it there was a strange kind of “glossy” feel to the entire front of the shirt. Not just the inked areas, but the whole front. I’m not sure what that was…some kind of residue from the screening process perhaps (or however it is you kids print designs on shirts nowadays)…but once I washed it, it was fine.

If you are interested in purchasing one of the designs here (the others — and, I’m sorry, but indulge me here because cataloging references is one of my life’s greatest joys — are Space Invaders, Dig Dug, and Pong) it’s worth knowing that the sizes run a bit large.

I ordered a medium, and it’s really more appropriate as a night shirt. That’s not the company’s fault — I’m on the precise cusp between a small and a medium, so I’m acutely aware of the lack of industry sizing standards — but it’s worth mentioning. Order accordingly.

My shirt was free, but they’d typically run around $20 after shipping. So really it’s a question of personal value. I really don’t mind spending a few extra dollars for seasonally-themed things, because I understand that merchants really just get one chance a year to profit from them. And, besides, seasonal stuff is fun to break out annually. Nobody will be wearing this in August or anything, but as long as you get a few Decembers out of it, I think it’s a decent buy. ($20 isn’t that much for T-shirt anyway.)

So that’s it. In summary, I like video games.

There. I hope you enjoyed THE ONLY CHRISTMAS THING I’LL BE DOING ON THIS SITE ALL YEAR BYE.

…ahem. Check back a bit later in the week, for a multi-part article series I really hope you’ll enjoy.

—–
NOTE: Just to make it clear, any time I review something on this site — or anywhere — my opinions will be honest, regardless of whether or not I received a free item in exchange. (Those who know me for my reviews on Nintendo Life will be aware of that.) Having said that, I’d be curious to know how you guys feel about reviews on this site, so please do let me know!