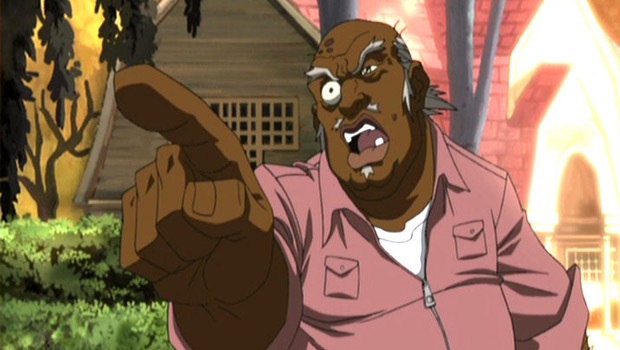 I just wanted to draw your attention to what has to be the most intriguing Kickstarter campaign I’ve seen yet. (It’s certainly the only one I’ve even considered donating to.) Aaron McGruder wants you to support a live-action Uncle Ruckus movie. And you know what? You really should.

I haven’t written anything about The Boondocks here yet, but I will. I was a bit wary of the show before it premiered (and the comic strip never did anything for me) but from the moment I gave it a chance I realized that it was so much more than I expected it to be. It’s not the cheap humor of culture clash that I expected it to be…it’s a consistently strong and shockingly smart dissertation on race relations in America.

Similar ground has been covered more times than I could ever hope to count in the past, but McGruder’s is an articulate rage, and it’s one that very knowingly has three fingers pointing back at him. That’s more than part of its charm…that’s its identity. McGruder doesn’t focus entirely upon how blacks are perceived in a predominantly white region…he also looks inward at blacks themselves and asks, “What the fuck are we doing?” As often as he’s appalled by white privilege, he’s at least as enraged by black attitude, and The Boondocks emerges as a brilliantly confused, ethically complicated question of co-existence…both with each other, and with the conflicting aspects of ourselves.

The young Freeman brothers — radical idealist Huey and burgeoning thug Riley — reflect this duality quite well, and serve as our focal points for most episodes, but the most rewardingly complex creation of McGruder’s is Uncle Ruckus, a self-hating black man who has bought into the idea that whites are the superior race. The absolute worst of American hatred is filtered through this rotund, milky-eyed black man who curses his own race and wishes nothing more than to see the country purified into a sheet of uniform whiteness.

It’s terrible, and yet it’s tragic. Ruckus isn’t an inherently bad person — any more or less than any other character — but he serves as a brilliant prism that refracts the various approaches to race relations that have been taken elsewhere in pop culture. And now, with help, McGruder may create a live action film about him.

And I think you should help. Because if the show is anything to go by, this movie could be a massively affecting and disorienting comic masterpiece.

I won’t beg, and I won’t say any more — as I’m realizing now how poor I am at expressing my love of the show — but I hope you at least consider it.

If you haven’t seen the show, here’s a list of episodes to get you started: “Granddad’s Fight,” “A Huey Freeman Christmas,” “Return of the King,” “The Passion of Reverend Ruckus,” “Thank You For Not Snitching,” “Home Alone,” “It’s a Black President, Huey Freeman,” “The Fundraiser,” and “The Color Ruckus.” Or just all of them. They’re pretty fucking great.

Oh and Lego is gauging interest in a series of Mega Man-inspired sets. SO GO DO THAT TOO.