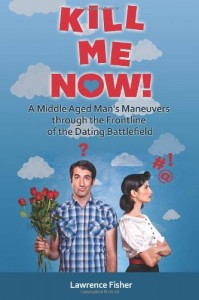 When we discussed A Soul’s Calling we talked a bit about the fact that not everything that happens is automatically a story. It takes a certain artistry on the part of an author to make something a story*…it doesn’t simply become a story because we would like it to be one. Lawrence Fisher, author of Kill Me Now!: A Middle Aged Man’s Maneuvers Through the Frontline of the Dating Battlefield understands this much. Frustratingly, however, he settles for minor interjections, irrelevant detours and repeated attempts at coining a catch phrase. The end result feels much less like a middle-aged dating handbook than it does like an awkward performance at an open-mic comedy club.

But I’m getting ahead of myself. The book itself is structured as a journal, running for seven months’ time. It starts in December and ends in July, though we don’t get any idea of what year it’s meant to be. That’s not necessarily a bad thing, but it does contribute to an overall feeling of detachment from the action. It’s difficult to care about the folks who appear on these pages simply because we never really get to know them, and there’s no opportunity to do so. We might hear that so-and-so is going to a wedding soon, or that Lawrence spoke to someone at the gym, or that somebody else is a nutritionist, but these things function more as labels than as descriptors, and by the end of the book we don’t know Ed — Lawrence’s most frequently referred-to friend — any better than we know a nameless woman who once confused Lawrence in a parking lot. He, like everybody else, is a faceless reference point that doesn’t have any reason to be referred to.

Each entry is given a specific date, for instance February 24 or May 2, but the action is often entirely removed from that date, with Lawrence describing things that might have happened days or weeks previously. Again, it really fuels a feeling of overall detachment more than anything else, and just serves to erect another barrier between us and the vague, hazy “action” that the book is trying to describe.

In many entries, but not all, Lawrence is on a date. His intentions for writing about these dates — which are clearly fictionalized to an extent, but that’s a good thing — flip-flop at various times throughout the book. Sometimes he’s writing about these things in order to “decode the signals of his enigmatic opponent” (as he has it on the back cover), and other times he seems to just want to make us laugh. Either of these ambitions is fair, and certainly they could be combined easily enough, but none of the anecdotes pull very far in either direction, let alone both.

If we are to appraise the book on its ability to “decode” anything we’d had to say it’s a failure, because we don’t really glean much direct insight into anything. (That “direct” is a key word there…stay tuned.) We’ll have, as a hypothetical but faithful example, a situation in which Lawrence is eating dinner with a woman. He’ll pick up on signals, but he won’t know what they mean…nor will he even make an attempt to figure them out. He’ll write something along the lines of, “She’s twirling her hair. What does that mean? And why did she turn down the wine? Does she not drink, or does she just not want to drink with me? Why is she looking over her shoulder?” and so on, essentially just reminding us that signals are being given…but with no attempt made to figure them out. He raises the question…and leaves it there. There’s not much decoding going on; just a constant series of reminders that Lawrence doesn’t know what’s going on.

If we are to appraise the book as a purely humorous work, we find it inching a bit closer to success. After all, dating can be very funny. We’ve all been on bad dates, and it’s probably safe to say that we’ve all been on at least a few outright terrible ones. Some of those might make for a good story, but none of Lawrence’s dates seem that bad. Perhaps he just chose the wrong unidentified year to record in print, but overall these dates are more awkward than awful, making it puzzling that he’d want to single any of these out as hilarious anecdotes. It also makes his constant entreaties to the reader to “Kill me now!” (attempt #1, of approximately 20, at a catchphrase) feel that much more overwrought.

In one instance, the worst thing that happens on one of his dates is that the woman turns out to be shorter than he thought, because she was wearing boots when they met. Another time he is approached by a woman at a coffee shop who asks him “Is this seat taken?” He says no…and she takes the seat with her to go sit with her friends. These may indeed have been funny moments in Lawrence’s real-life dating adventures, but on the page they don’t feel like they warrant much more than a footnote, and they certainly don’t deserve several pages of build up apiece. Why is Lawrence shouting “Kill me now!” when the worst thing that happened is that a woman talked too much on their date? That’s really not that bad…it’s not as though she tried to mug him or became verbally abusive.

What’s really problematic about some of these stories is that Lawrence comes off as more than a little shallow and condescending. A good portion of the time he wants his readers to kill him now simply because his date isn’t attractive enough. Yes, we know, people use misleading photos in their online dating profiles all the time, but it’s a bit harsh, once a woman has made the effort to meet with you, to fixate entirely on her looks and write for page after page about how she isn’t up to your standards, physically.

Kill Me Now! makes fun of people who are unattractive, people who are too old, people who have speech impediments, and so on. It begins to feel rather cruel, as these aren’t decisions that people have made. It’s one thing to pick on a woman for boasting about her achievements all night, or something, but it’s another thing entirely to say she’s too fat and leave it at that. That’s, to put it simply, just not very nice, and absolutely nothing that deserves to be immortalized in print.

The fact is also that these women are in the same boat Lawrence is, and that’s something that goes almost totally unacknowledged throughout the entire book. These women are lonely too. They’re trying just as hard to find love, but the narration would have you believe that they’re just out there to waste time and mislead strangers.

It would have made for a far, far better book if Lawrence really did try to decode their signals, because then perhaps the book would reveal the grand truth that they’re all lonely people, and they’re all being shallow and picky, and they all need to slow down and figure out what they want before rushing into every opportunity that presents itself.

Both Lawrence and these women are pouncing on everything that comes along…so of course they end up feeling disappointed more often than not. That should imbue our narrator with a sense of kinship toward these women. They’re all making the same mistakes, and they’re all in search of the same thing in the same way. Instead, however, his “opponent” remains just that, and he’s free to simply dismiss them for being too ugly. It’s disappointing on a number of levels, and the rampant homophobia doesn’t help things either.

In a few chapters Lawrence lets the mask slip somewhat. Instead of shoehorning meaningless references into his text (everything from Alf to Seinfeld to, you guessed it, Don’t Mess With the Zohan) and attempting to coin catchphrases, he takes a moment to write about the truth of his situation: he’s a lonely man. He just wants somebody who will be happy to see him, and be with him, and start a family with him.

That’s sweet. That’s human. And that’s something that would make his story much more humorous if we got to see it more often. When somebody picks on others for being less than perfect, it’s not funny. When somebody picks on others as a defense mechanism because he himself is less than perfect and would rather project his insecurities onto others, well, you’ve got something there. Something worth reading. And maybe even, in some gloriously twisted way, something moving.

Instead we have a series of monologues — I’d coin a phrase for a corresponding male version of The Vagina Monologues, but I can’t think of anything that wouldn’t sound incredibly mean-spirited — in which Lawrence fails to understand which story he’s even telling.

As with A Soul’s Calling, we have something here. But the author would prefer to focus on something else…and it’s something that, unfortunately, doesn’t get him very far. Kill me now.

—–
* Someone I knew years ago referred to this as a necessary “romancing” of our experiences. I thought that that was a fantastic way to put it, and it’s stayed with me ever since. The fact that his writing was awful only further proved to me that even bad writers — and he’d be the first to admit he was, at least at the time — can understand that raw material needs to be spun into art if it’s going to be worth reading.