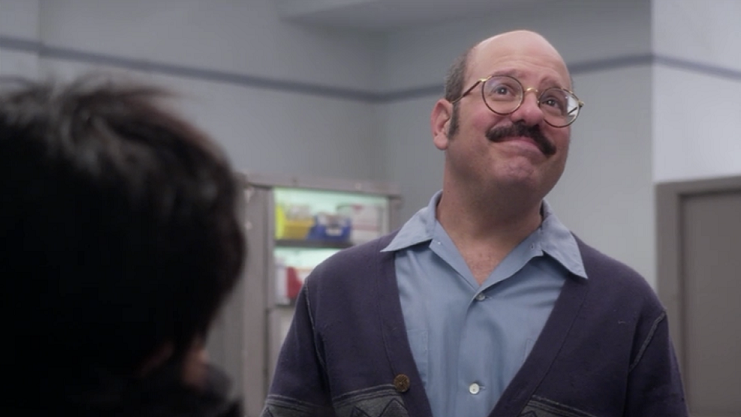 This first Tobias episode, “A New Start,” pulls double duty in season four: it’s the most explicit illustration yet of why this string of episodes doesn’t work, and it’s a pretty solid promise that it won’t get any better.

He’s a never-nude, a failed actor, a failed doctor, a failed husband, a failed father, a potentially latent homosexual, and he’s prone to unintentional wordplay, dressing up in silly costumes and breaking into characters of his own creation at a moment’s notice.

So why — why — does this season struggle so much to find something to do with him? You can do anything with Tobias. As Maeby would say, this was a freebie.

Or it should have been anyway. Instead we get another episode, like Lindsay’s “Indian Takers” before it, that has no idea of how to get from point A to point B, so instead we just get meandering glimpses of points D, H, T, M and X in the hopes that we’ll be too baffled to notice. None of it adds up to anything that feels connected in any way, let alone a coherent story. No, some recurring wordplay about rocks and invisibility don’t count…those should be neat verbal flourishes as a reward for paying attention, not a substitute for an even superficial understanding of how an episode of television needs to work.

Things (haha, I said “thing,” and Tobias is dressed as The Thing, so I guess I just wrote an episode too!) start off poorly, and only get worse from there, with Tobias appearing on some local version of To Catch a Predator. Remember all those funny things about Tobias that I listed above? How silly of me not to mention the pedophilia he’s so well known for.

What’s that? This has never been something associated with the character before? Silly me, assuming they’d want to write a full episode about who Tobias is, rather than as a build up to some nonsensical gag that has nothing to do with anything we know about him. I’m a boob.

I’m not saying the Predator scene isn’t funny…I’m a sucker for stupid sex jokes. But why are we suddenly mining pedophilia for a reason to laugh at Tobias?

Early in the episode, Lindsay clumsily (from a writing standpoint) says that Tobias being gay is sort of a running joke in the family. Setting that up, there are two obvious things the episode can do: it can have Tobias struggle to be more careful with his word choices so that he doesn’t appear gay, or it can embrace that and have him disregard Lindsay’s advice entirely and just blurt out all manner of unintentional dick jokes. In short, the episode said something that’s never been spoken quite so clearly before…why then, if that’s the “running joke” obnoxiously spelled out for us, do we abandon that entirely and end up structuring a climax around something entirely different?

Perhaps if Tobias were coming to see George Michael instead of Maeby it would have fit a little better. After all, not only is Tobias not a pedophile, but he’s also not supposed to be interested in women. Having him come over to ostensibly diddle a little girl is about as far from the Tobias we know as it’s possible to get…and now that I’ve spelled that out I’m kind of convinced that any laughter I gave that scene was far too generous.

But that’s just the start…it really only gets worse from there. Quite how anyone could watch these episodes and not see an enormous step down in quality of writing is beyond me, especially in the face of the first act of “A New Start,” which is literally non-stop narration for around nine minutes.

That’s exhausting, and that’s extremely sloppy. It feels very much like footage was shot with little or no mind paid to how it would eventually be worked into the show, so we end up with long stretches like this wherein the narrator just has to tell us about everything they didn’t think to shoot…which turns out to be a lot.

In this case it’s Tobias going to India with Lindsay, though neither of them realize it. That’s the long and short of it, and nine minutes’ worth of narration isn’t going to convince me that it’s any more clever than that single sentence made it sound.

While in India Tobias breaks his skull a few times, inspiring him (again) to become an actor since he has a gift for making people laugh. Nevermind the fact that rolling off a hospital bed is about the least funny bit of physical comedy we’ve ever gotten from Tobias…we’re not supposed to pay attention to that.

So he comes home and we get more of the other half of “Indian Takers,” which would be great if it filled in the gaps that this earlier episode needed in order to feel like a story, but instead we just splinter it further with stream-of-consciousness plotting that leads to Tobias and DeBrie standing on street corners dressed like two members of The Fantastic Four.

That’s another thing we love about Tobias, right? The way he dresses up like comic book characters and spends entire episodes writing musicals about them?

I do want to talk a bit about DeBrie, though, because with Maria Bamford behind her I really did expect this to go somewhere. It never did, and that confused and disappointed me, but I think I figured out why.

I Googled her to find out how to spell the character’s name, and found some casting reports for Arrested Development season four, in which Bamford mentions she’s in the show, but doesn’t say much about who she plays, because it’s “a small part.”

That says a lot, I think. If she believed she was playing a small part, of course she’d let her character remain a cartoon. She probably only expected to be cut to now and again as a sort of punchline in itself.

In reality, though, she’s a major character this season…and that’s probably something Bamford didn’t expect. And which also suggests footage was shot in advance of knowing where any of it would go, or what it would actually be. Season four feels like it was born in the edit, and not in a “lightning in a bottle” sense. It feels dead and disjointed, with stitches of narration trying, and failing, to hold all the disparate pieces together.

Tobias was never a one-joke character, but he was definitely a series of easy jokes. That’s okay. In the third series of The League of Gentlemen, the sketch comedy troupe took a handful of broad characters and gave them each deeper, episode-length stories that stripped away the general gags they were known for and explored who they were as people. It can be done, and The League of Gentlemen had the writing and acting chops to take silly characters that we knew from two- and three-minute skits and give them humanity…without ever being less funny while doing so.

What’s more, that third series consisted of episodes that focused on one character apiece, and by the end of the series managed to come together and tell a greater story as well.

Arrested Development‘s fourth season could have learned a lot from that, because the more time we spend with these characters the less recognizably human they get, and the bigger the story it tries to tell, the more it gets mired in go-nowhere nonsense.

The comedy in this show always seemed so natural and effortless. Please, stop trying so hard.

Episode 5: “A New Start”
Central Character: Tobias
Other Family Appearances: Lindsay, GOB, Maeby
Most Clumsy Reference to Original Run: Tobias saying “Hothothot” in India was the only specific callback I noticed, but it was the lest terrible thing about that sequence.
Scene That Most Needed Tightening: Tobias wearing his sheet in various silly ways in the bathroom, which I believe was a scene cut from a Warden Gentles episode of Rocko’s Modern Life.
Best Line / Exchange:

TOBIAS: All you need to do is tell people what a terrific actor I am, because I can’t do it believably.