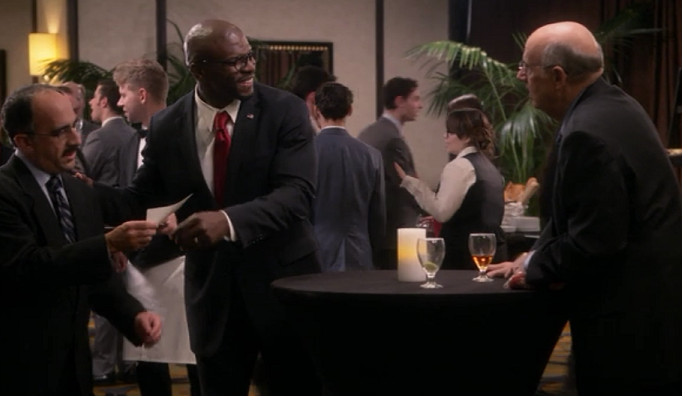 Disappointed by season four so far? Don’t worry Arrested Development fans! This show knows exactly how to get you back on board: a series of interlocking episodes focused around the political aspirations of a minor character we’ve never heard of before!

I’ll probably have more to say about this when we get to the final episode, but the most puzzling thing about this season is how much importance it gives to certain events and characters that have literally no impact on anything and that go absolutely nowhere. Here we meet Herbert Love, but we don’t learn anything about him except that he’s not a good character and not particularly funny.

Evidently he’s prone to gaffes and saying inappropriate things, but none of this is presented in a funny enough way to make it worth having in a sitcom, nor is it clever enough to serve as political commentary. He’s just a guy in a suit and some glasses, and that’s apparently what passes for character development at this stage in the game.

“Double Crossers” spends a lot of time talking about Herbert Love and whether or not he’s going to support the wall George Sr. wants to build between the United States and Mexico, in order to stick it to Sitwell and pocket some sweet government dough. So I hope you like lots of humorless scheming about political bribery, government support for construction projects, and fund juggling, because otherwise there’s not going to be much for you here.

The focus on Love is a bizarre one, even moreso than the focus on Marky Bark, DeBrie or Rebel Alley. In those cases yes the characters stink, but at least they’re portrayed as being important to the characters we do care about. Here he’s just a politician that people talk about sometimes, and though their paths do independently cross his own, he ultimately has no impact on anything that happens this season. Maybe he would have if we had gotten any kind of resolution for the 15 episodes’ worth of tail-chasing, but as it stands he just shows up, dominates a few scenes without ever making it clear why he should be important to us, and then vanishes completely with an implied middle finger raised to the audience who might have expected him to do something.

When fans asked for more Arrested Development, it was pretty clearly because they felt there was more mileage in these characters. We didn’t just want Michael and Maeby and Lucille back because we liked staring blankly at them…we wanted them back because we knew there was so much more they could do, more stories to tell, more twisted interaction to be enjoyed. So it’s a bit frustrating that when the show did come back it felt a lot more like The Continuing Adventures of Congressman Nobody, with special guests the Bluths.

Even worse is that once again the writers don’t know what to do with a character in his own spotlight episode. Hot on the heels of Tobias reprising his classic pedophile cosplay routine, we have George Sr. driving in circles and cross-dressing while Oscar fucks his wife. In other words, nothing happens.

Well, that’s not quite true. He signs Michael’s release for the film, gives some money to the Love campaign, and gets chased around by some bees so that the whole sweat hut story from “Borderline Personalities” can be stopped abruptly (we wouldn’t want to accidentally see something through this season, would we?). It’s terrible plotting, and I’m genuinely shocked that an episode in which so much doesn’t happen still has a mountain of filler.

The one potentially interesting thing about this episode is that George Sr. and Oscar begin to change places in a whole other way: George Sr. feels more sensitive and remorseful, while Oscar becomes more sure of himself and aggressive. But while the idea is raised by the episode it never becomes explicit and — say it with me now — it goes absolutely nowhere, so I’m not even sure how much of that is deliberate. Further muddying the water is the fact that George Sr.’s personality change is down to low levels of testosterone, just to prevent you from concluding that it might have something to do with good writing.

I’ve heard it said that these episodes improve upon rewatching, but without exception I’m enjoying them even less the more I see them. I think people are a bit too impressed by the fact that certain scenes in one episode continue through another, but that’s not enough for me. Cheap editing tricks and shuffled timelines are no substitute for cleverness, and the way it’s handled here isn’t as rewarding as it should be.

Earlier in the season I mentioned a scene that pulls out to reveal Buster screeching, then is reprised later with a second pull out to reveal GOB groaning. That’s the way this should work…layered jokes that add to or expand upon the joke each time we see them. But that’s the exception for Arrested Development season four, and instead what we usually get is a scene trimmed abruptly so that later on we hear some more dialogue or have a pointless little detail explained retroactively. It tries to put on a good show, but it’s really nothing more than a deliberate muddle that doesn’t actually enrich the final product.

That doesn’t work, because there is no joke the first time. We don’t get a single joke that plays in multiple ways…we get a single joke that we’re not allowed to see until later. Obscuring the license plate isn’t clever…it just eats up time in an episode when we’re going to see the scene play out properly in another episode, effectively doubling the amount of wasted time in a season already too aimless. That’s not an impressively structured reveal; it’s just gets off on being withholding.

Something similar happens here. We hear a crowd chanting “Put up the wall!” on Cinco de Cuatro, and later we find out it’s Lindsay leading that chant. Does it matter? Not really, because it just feels like an out-of-nowhere development in an episode that desperately needed an ending, and the fact that we later learn it’s Lindsay doesn’t change that, or add to it, in any way.

Oh well. Why am I talking about other episodes and general problems? Because I might as well. Nothing of any merit even happens in “Double Crossers.” Even the title suggests a better episode than what we actually have. Oscar sleeps with Lucille, yes, but that’s happened before…and it’s been handled far more interestingly than it is here. (And, again, it goes literally nowhere.) And George Sr. first wants Love to support the wall, then he wants him against it…but I don’t think that qualifies as a double cross, and it’s certainly nothing we should care about. Herbert Love is a non-character with fictional political opinions running in a race that doesn’t even play out during the course of the season, and I can’t think of anything more inconsequential than that.

We do get a pretty nice scene with GOB and Michael though, which just might remind you of the kind of thing the show does when it has some sense of what it’s doing. (GOB breaking the countertop also feels like a lost moment from the classic years.) And since the next episode is GOB’s…well, that can only be a good thing. Right?

Episode 6: “Double Crossers”
Central Character: George Sr.
Other Family Appearances: Lucille, GOB, Lindsay, Michael, Buster
Most Clumsy Reference to Original Run: “No, I mean it’s good to be out of that sweaty old hot-box at the compound.” George Sr. singing “All You Need Is Smiles” comes close, since that happens only because it’s a song that was once in another episode and there was nowhere else to put it, or the protracted “Bees?!” reprise.
Scene That Most Needed Tightening: Everything with the pointless Herbert Love should have been tightened right out of the season. Dr. Norman’s “here’s my character’s only joke again and again” spotlight scene isn’t much better. Then there’s GOB and Michael having their right-of-way argument. Boy, you’d almost think rigid timeslots weren’t such a bad thing…
Best Line / Exchange:

GEORGE SR.: I cry at the drop of a hat. And I hate the way I look. I actually had one cute hat, and it blew off in the CVS parking lot and this whole car full of black kids ran over it. For no reason!