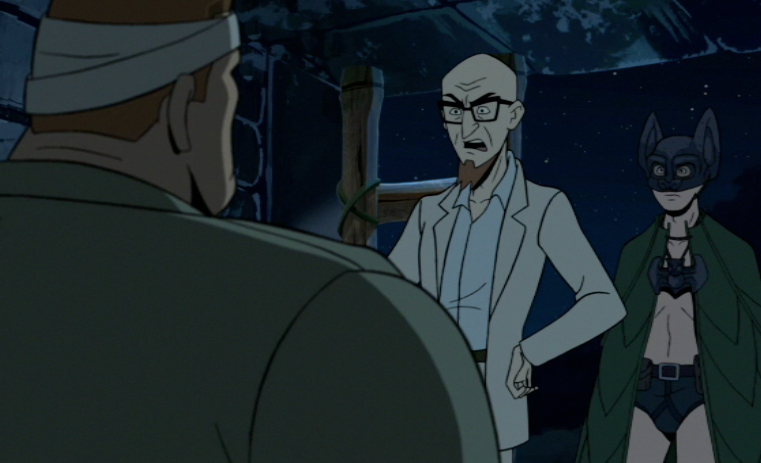 If The Venture Bros. isn’t the best show on television right now, I’d love to know what is.

That isn’t to say that it doesn’t stumble, or broadcast episodes that disappoint, but it is to say that through four seasons and change I have yet to feel like the show has done anything overtly wrong. Even my favorite shows tend to go through patches that seem to suggest a fundamental misunderstanding of who their characters are, or they lose track of their own “voice” and start to write episodes that might still be good, but just don’t feel right.

The Venture Bros. hasn’t had that issue. Any unwelcome detour has remained true to its characters, and at least felt like part of a sustained vision. “Venture Libre” might never be the episode that I point to when I want to convince somebody that the show is great, but it would be an example of why the show is great: this far along, in the fifth season, we’re still watching our main characters grow.

This is especially impressive when it’s handled against the backdrop of the Venture clan mixing it up with animal people in the jungle, but we’ll get back to that.

When the show began, way back in season one, it was probably safe to say that Dr. Venture was the most interesting character. After all, he seemed to be our protagonist, and the more we passively learned about his backstory, the more we felt for him. The domineering and distant father, whose accomplishments by the time of Rusty’s adolescence already eclipsed anything the young boy would ever accomplish. The lack of a mother figure. The failed inventions, the financial difficulties, the pill-popping. The death of the space-age dream in evidence all around him.

And yet Rusty has proven to be the most static character. This isn’t meant a criticism…it’s simply who he is. Dr. Venture is locked into a cycle from which he can’t escape, and may not entirely want to. He’s comfortable in his misery, something sold expertly by the voice work of James Urbaniak, who makes Venture’s sustained bitchiness sound like he’s tapping into his last well of joy.

Around him, however, all throughout Venture’s circles, other characters evolve. The Monarch and Dr. Girlfriend split up, explored who they were, and started a new life together. Brock became fed up with almost being killed on a weekly basis for the sake of nannying his boss around, and rediscovered a sense of professional fulfillment with SPHINX. Even Billy and Pete found separate moments of clarity in season four’s sorely underrated “The Silent Partners.”

The world grows up around Dr. Venture, but at the end of the day — to paraphrase his vanity musical project — he’s Rusty. He’s not going anywhere, and while we undoubtedly get glimpses of humanity within, he refuses to evolve. Meanwhile, everybody else — and I do mean everybody — leaves him behind.

“Venture Libre” sees this happening again. We’ve seen quite a bit of Dean growing up this season, from burning his learning bed to finding out that he’s a clone, and his evolution as a character is fast becoming one of the highlights of the entire show. What we haven’t seen as much of is a similar growth from Hank, but through some brilliant sleight of hand we get that now. Both Venture boys are already inching their way out from behind their father’s shadow…and that’s something Rusty himself was never able to do. His own sons have outgrown him.

Hank’s character work taps back (though not explicitly) into the glorious sequence in season four that showed him trying out for SPHINX…and proving himself to be shockingly capable. We’ve seen Hank demonstrate competence before, but it’s never been sustained quite as long or quite as satisfyingly as it is in “Venture Libre.”

Pairing this episode up with “Love-Bheits,” which is the last time Hank adopted his persona of The Bat, we see just how far he’s come. And even though his development in this capacity never got much screen time, it feels right. We’ve seen just enough of it to understand that, ultimately, Hank can do this. It might take him being wired on coffee beans to unlock his potential, but once it is unlocked, he’s more of an asset to the team than his father ever gave him credit for, and seeing him rescue his pop and Hatred with genuine cleverness and aplomb feels like both a satisfying payoff and a twist of the knife in Venture’s back. As much as the old man likes to keep his sons down and hold them back, they are starting to show us that they’ve managed to grow after all.

Our other big character development comes from Sgt. Hatred, and allow me to get on my soap box here for a moment: I love Sgt. Hatred. I don’t know why so many vocal fans and other reviewers seem to dislike him; I think he’s an extraordinarily rich character who is perfectly at home within the show.

I’ve seen it said that people don’t like him because his only joke is that he’s a pedophile. However I disagree entirely; that’s not his joke…that’s his tragedy.

His joke is that he’s a good person, at heart, or wants to be one. He wants to be loved and accepted. The pedophilia is what holds him back, and will always keep him in a very specific place in the world, no matter how hard he wishes he could overcome it.

The fact that he’s trying to be a good person doesn’t overshadow his dark past…rather his dark past prevents him from ever being seen as a good person. That’s tragedy in the thickest Venture tradition, and I absolutely love the way it’s been handled with his character. Jackson and Doc don’t want us to laugh at his sexual improprieties…they want us to laugh at his situation because of them. That’s a very different thing.

Now, in “Venture Libre,” we get a window into his subconscious. It’s a dream that seems to relay his backstory, as he’s injected with something and then attacks a little boy. It’s not played for laughs. At all. It’s dark. And because this is a character who earlier in the episode sacrificed himself to save his boss — and still bears the scars to prove it — that’s sad.

In fact, it shakes him up so much that he decides to stay behind on this island of abominations. He’s a monster, he says…and he just wants to be somewhere, for once, that he can be accepted.

Is that a joke? It’s certainly not played as one.

No, the joke is when he realizes he’s in danger and says, “Let’s get the **** out of here.” The tragedy is in the speech that leads up to the punchline. The joke isn’t, and never was, that he has inappropriate thoughts about children…that’s his flaw as a human being, and it’s a guilt he’ll never escape.

Even HELPeR gets a short moment of sadness, when he admits to Dean that he wants his old body back. Yes, even the bumbling old Venture robot outgrows Rusty.

“Venture Libre” isn’t about any of this character development, and that’s okay. The Venture Bros. is a show that can afford to let its characters grow in the background, so that one day they might drop down from the trees in a makeshift Batman outfit and surprise us. What’s impressive is that after so many episodes, we are still being surprised, and we’re being surprised during plots that wouldn’t seem to support it.

It’s not a great episode, but is evidence that The Venture Bros. is a great show.

Well, except for that Congresswoman stuff. That was garbage.