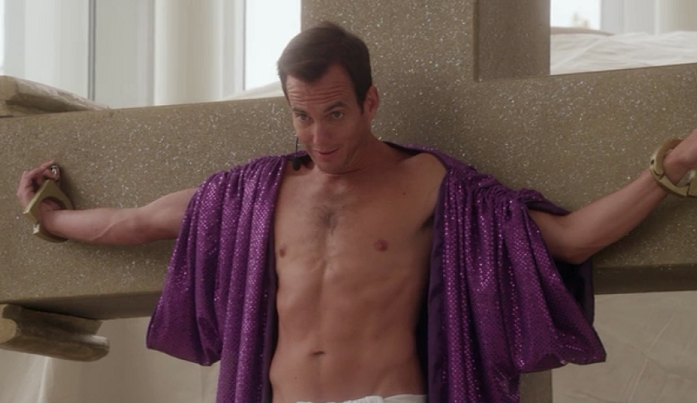 I’ve noticed that this episode tends to get singled out, by both commenters here and reviewers elsewhere, as a highlight of season four. And, really, that’s no surprise. As messy as these episodes have been and will continue to be, “Colony Collapse” is downright masterful by comparison.

Of course, that’s only by comparison. Even so, it’s nice to finally see one installment of this splintered narrative that functions as a complete and moderately insightful character sketch. We get to explore an aspect of GOB’s character that had always been left unspoken, see it through a variety of external lenses, and then close on a killer punchline. (And I mean that; barring the “On the next…” sequence, GOB’s final line is brilliant punctuation to everything we just saw.)

It has its own issues, of course, and we’ll deal with those, but “Colony Collapse” serves as an illustration of what season four should have been. Its focus is tighter, its themes well chosen, and its central character handled in interesting ways that don’t work against anything we already know about him. Relatively speaking, I’m happy with this. However it’s still not that good, and as far as I’m concerned this would ideally be the least successful episode of the season, with the others managing to rise above its disappointing but funny watermark.

The plot here, as ever, is a mess, but that works because “Colony Collapse” does something with it. While it may not have much to offer in terms of narrative it at least does use its disparate, disjointed scenes to explore an interesting theme: GOB’s solitude.

With a quiet refrain of Simon and Garfunkel’s “The Sound of Silence,” we get slow, gentle zooms on GOB’s face, as he helplessly, hopelessly considers the path his life has taken.

This is a great example of the kind of territory these episodes should have charted uniformly. Admitted huge mistakes aside, GOB never really confessed to the sadness that underpinned his entire existence before. It was always there, as evidenced by his tortured relationships with his brothers and his abrupt bouts of fragility that left him in tears, but a few minutes later he’d be back to his old mindlessly swaggering self, confident and secure. There were always two GOBs in parallel existence: the one who would steal from you, and the one who was on the verge of breaking down in remorse over it. “Colony Collapse” occupies that territory in between, and allows us to follow GOB through the highs and lows, one always coming right after the other, in order to get a sense of who this quietly sad bully really is.

I like that, because it demonstrates not only an understanding of the character, but it qualifies as a genuine reveal as well, deepening our understanding of him as a viewer. It’s the sort of thing they could have done with Tobias, had they not decided to toss him into the humorless, irritating pit of despair that is the Fantastic Four musical.

In fact, coincidentally, “Colony Collapse” features Tobias in a capacity that would have made for a far more interesting episode than what either “A New Start” or “Smashed” gave us: Tobias has been picking up bit parts in Christian network programming.

That’s an episode right there! Tobias, a terrible but sincere actor, prone to inadvertently homosexual phrasings and situations, lands a recurring gig on Christian television. That would be a natural way of doing something with the character, and by default it generates better jokes and funnier plots than just having him dress up as the Thing for no reason and show up on To Catch a Predator.*

The Christian detour comes from Ann, and we pick up her relationship with GOB right where it left off in season three. I have some personal issues with this, as GOB waiting an hour for her to turn 18 crosses the line, I feel, between entertainingly creepy and just creepy, but that’s minor and in the face of better writing wouldn’t have been an issue. I’m also willing to go with it if that’s what it takes to get us to his magic trick with her and the mouse bodies, which is probably the only time in a season full of flab that a joke actually does get funnier with each repetition.

Ann is a great character, and Mae Whitman is a delight to have back. However her main role in the show was as George Michael’s girlfriend, with Michael expressing dislike for her both openly and accidentally. Sticking her with GOB and separating her from those two characters means they need to give her a new dynamic to play with, and they don’t really do that. Ann is just sort of…there, and since she’s there for around half the very long episode (almost 40 minutes), that’s a problem.

More of a problem, though, is the fact that we trip over the same joke constantly during this long sequence. When Michael would refer to Ann in off-handedly cruel ways, it was funny for two major reasons: because it was unexpected, and because it said a lot about Michael. When GOB does it again and again it doesn’t feel unexpected, and it says less about him than it does about the writers, who for whatever reason felt obligated to repeat the same old gag over and over.

It worked in the original run because the joke was always on Michael. I don’t think anyone heard his casual dismissal of the girl and thought, “Ha, yeah! She does deserve to be spoken to that way!” Instead it was a great way of revealing, still slowly at the time, the fact that Michael was kind of a dick.

With GOB it feels a lot more abrasive and a lot less necessary, to the point that it circles around to the way Family Guy treats Meg. There’s no reason for it, and if you find that funny then I’m happy for you, but relentless meanness for the sake of being relentlessly mean doesn’t reflect good writing.

Similarly, we run into another problem with Ann, because now we see that everybody in the world overlooks her and forgets she exists. Again this worked when it was Michael, because the way he reacted to her defined who he was both as a person and as a father, but when priests are surprised to find her sitting right next to them it’s no longer a character detail…it’s just a lame running gag.

I touched upon this before in the context of the new characters, but it’s a problem when this kind of comedy is extended to everyone in the show’s universe. The Bluths once felt like sheltered, spoiled brats who would have been unable to function in life outside of their comfortable bubble because they simply don’t understand it, as Lucille would say, and won’t respond to it. In fact, that was more or less the entire premise of the show.

Now, however, we see everybody acting like the Bluths, and there’s no more distinction. If Michael is passively cruel to Ann, that says something about Michael. If the entire world is passively cruel to her, there’s no joke. The playing field’s been leveled, and there’s nothing to laugh at. It’s almost as though Arrested Development now wants to occupy its own Springfield, where every character can be funny and join in on the same jokes. The problem is that we’re too late in the game for that; The Simpsons built up the town as a character very early in its run, and stuck with it. Arrested Development segregated its characters from civilization by means of prisons, penthouses, and model homes in deserted areas. It doesn’t get to stitch a world together and act like that’s how it always has been…at least not without sacrificing everything that made the characters who they were to begin with.

There’s still some very good stuff in the episode though. The Steve Holt! bits were great, and tapped perfectly into the complex blend of funny and heartbreaking that has always been a part of that relationship. And DeBrie getting into the limo is another of those rare examples where the intersecting narratives works: when we first saw it happen in “A New Start,” it felt like a dark and tragic development. Now that we see it was just GOB and his young entourage, it plays more for comedy. That’s how this sort of thing should work: reveals that add to the experience of watching.

But then the bees come out and fly around so that funny music can play, even though that already happened in “Double Crossers” and it’s no funnier here. There’s really no need for the bees. They give the episode a title but they’re never very funny, and — once again — that whole plot goes nowhere. I guess we’re able to assume from Marky’s earlier comment that GOB’s bees eventually killed Johnny Bark, though, which is great character work because everybody’s favorite thing about GOB is how he runs around accidentally killing people.

When the episode ends we leave GOB with a mountain of new experience behind him, and yet he’s no wiser for the journey. He wants to fit in, but we see it illustrated explicitly that he will never allow himself to do so; once he’s accepted, he doesn’t want it anymore. That might even go a long way toward explaining why he’s still a magician: he’s not good at it. If he were, he’d have to move on.

It’s a great place to leave the character. Unfortunately we still have another GOB episode down the line, and that’s where they’ll make up for all the accidental good they did here.

Oh, and…why the fuck does he still have the limo?

Episode 7: “Colony Collapse”
Central Character: GOB
Other Family Appearances: Tobias, George Michael, Michael
Most Clumsy Reference to Original Run: GOB’s nervous stuttering has retroactively made its first occurrence a lot less funny. “Way to plant, Ann,” is also a totally unnecessary callback.
Scene That Most Needed Tightening: All of the Ann stuff. All of it. Absolutely every second of it. It might be even flabbier than the Roofie Circle…which was pretty effin’ flabby.
Best Line / Exchange: The magazine spread advertising Tony Wonder’s new gay magic act sweeps this one, reading “I’m here, I’m queer, now I’m over here!”

—–
* And why was the show there ready to pounce on him when he hadn’t actually set up any kind of rendezvous in advance? Let alone an illegal one? UGH THAT FUCKING EPISODE.