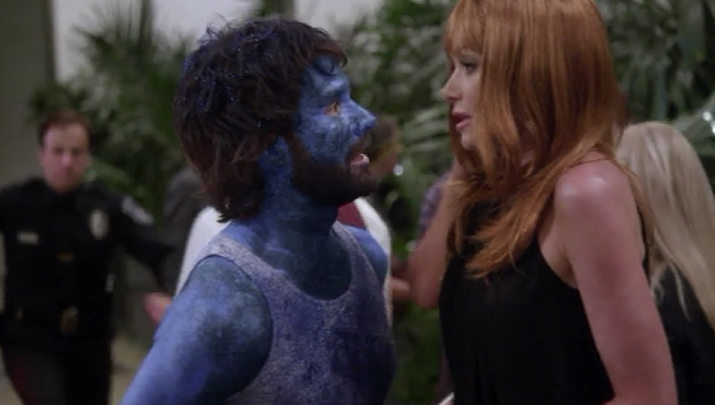 We’re now more than halfway through the season so I think it’s fair to pose a question: is this bad Arrested Development, or is this bad television?

The easiest way to answer that is to strip away the title and the names of the characters. If I’m left with everything that happens here, every written line and editing choice, but it’s not attached to the name Arrested Development, do I like it?

I don’t. In fact, my fondness for the original three seasons isn’t working against this batch of aimless, meandering tales; it’s making me work harder to like it. I don’t want to admit the fact that they’re not very good, because I want Arrested Development to be above that.

If I were to stumble on this exact season of episodes on television (or Netflix, I guess) and it had no attachment to this show, I’d probably feel like it was made by some cynical executive somewhere who wanted to cash in on the popularity of Arrested Development but didn’t have any sense of why people actually liked it. I’d probably come away from it feeling confused and embarrassed for him, and there’s no way I’d make it through fifteen episodes.

But here I am, trying, rewatching, sticking with it, searching for anything, because I want to like this.

It’s not working, though. The more time I spend with these episodes, the less charitable I feel toward them. This is bad television.

“Red Hairing” is yet another good example of why. Like “Indian Takers” before it, the second Lindsay episode is a jumble of events that go nowhere. I’d be tempted to use the sound and fury comparison but there’s not much of either of those things here. If there were sound and fury it might at least be fun. Instead it’s just…stuff. And it’s not funny, and it’s not smart, and it’s entirely too long, and it’s in serious need of editing. It’s bad television.

I know what you’re thinking: Philip, you crazy man. I can’t get enough of that Herbert Love and his extended non-jokes. He’s a great addition to the cast and I’m very happy his arc reaches no conclusion whatsoever, because that just means we’ll get more of him in season five. But here’s my concern: how does his role in this show fit in with that of my beloved Marky Bark?!

Well, good news, person who will never exist: “Red Hairing” answers that question. It doesn’t do much else, but let’s give credit where credit is due.

So Marky decides to detonate an ink bomb which will ruin Herbert Love’s suit, I guess. It’s not very clear what he hopes to accomplish and it’s even less clear what he could possibly accomplish, so let’s just assume it’s an inflated dry cleaning bill. Only the bomb goes off on Marky instead, so he can turn blue and Lindsay can repeat a joke from the show’s glory years in a way that makes no grammatical sense whatsoever, and then he goes to jail, and then he’s not in jail anymore. Man, it sure is nice to have Marky around again, huh?

“Red Hairing” does fill in some blanks from other episodes, though. For instance, it reveals that George Sr. wanted something from Michael in exchange for signing the release, which comes as a huge surprise because…no, wait. It’s not surprising at all, because it’s exactly what we already knew he wanted in “Double Crossers.”

Oh, well at least the episode also reveals that the ostrich that attacked Lucille 2 in “A New Start” wasn’t actually trying to hurt her; it was in heat so it was attempting to rape her instead and that’s much funnier.

When a female ostrich is trying to drive its non-existent ostrich cock into Liza Minelli for the sake of a laugh, you know the show is desperate, and nothing about “Red Hairing” disproves that. And here’s a fun little tidbit: if you’re wondering why it’s called “Red Hairing,” it’s because Lindsay wears a red wig for a little while, and then doesn’t anymore. It’s every bit as riveting as Marky’s plot.

Spending so much time with both Marky Bark and Herbert Love in the same episode goes a long way toward emphasizing how pointless the characters are. They have nothing to do, so they do nothing. In an episode that’s almost 40 minutes long. And we watch them do it. For almost 40 minutes.

We do have some nice moments here. Maeby calling her mother a whore has genuine bite to it, and Michael on the phone with George Michael is also nice, as they both lie to each other about not being able to make it to dinner.

Of course, this being Arrested Development season four, we have to reprise that latter situation later in the season to drag it out, make it less funny, eliminate all heart from the situation, and repeatedly spell out something the audience grasped long ago.

The first three seasons of this show were densely packed little puzzles, with a simple narrative playing out overtop of the cleverness and tricky structure. That’s why it was fun to watch the first time, and rewarding to watch again and again. At first you laughed. Then you went back and laughed at all the stuff you missed because you were laughing the first time. Then you went back more and more to find all the stuff you didn’t notice enough to laugh at before. And there was heart, and social satire, and brilliant character interplay.

Here, we replace all that with long humorless stretches of literally nothing, single jokes that get hammered into the ground so completely that you’re sick of them by the time the episode ends (so much for rewatching) and unintelligent “reveals” that just explain things we already knew or give us a lame punchline that was gracelessly withheld the first time around.

It would have been nice if season four could hold its own against the classic years, but even if it didn’t, it could chart a new identity for itself, and work as some kind of noble experiment at the very least. As it stands, though, I’m glad this is on Netflix, because it genuinely doesn’t deserve to be on TV.

Also, what was that Annyong thing at the end? I have to assume they shot the scene with the assumption that they’d figure out a joke for it later, then couldn’t figure one out and just slapped it in anyway.

That’s not the show I remember, and that’s not a show I’d even watch.

Episode 8: “Red Hairing”
Central Character: Lindsay
Other Family Appearances: Lucille, George Sr., Maeby, Michael, George Michael (voice)
Most Clumsy Reference to Original Run: “He blue himself.” There’s absolutely no reason to revisit the finish-each-other’s-sandwiches gag either, except that it happened once, and therefore we need to be reminded that yes, the writers like to quote this show too!
Scene That Most Needed Tightening: Herbert Love’s date with Lindsay turns into Herbert Love showing off his rhyming skills and pickup lines for the camera, and if you can reasonably tell me why that belongs in the episode I’ll be hugely impressed.
Best Line / Exchange:

LINDSAY: Honestly, Lucillie 2, you’ve been like a mother to me. Except kind, and loving, and willing to let me eat.