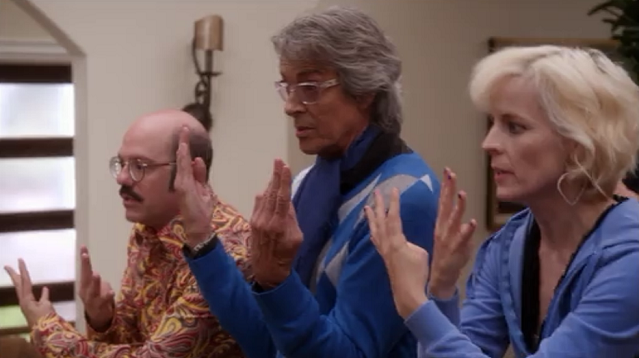 I’ll say this much for “Smashed”: having rewatched it, it’s not as wall-to-wall bad as I remembered it being.

Of course that’s faint praise, especially since that’s due to the fact that I forgot all about the scene with Tobias and Michael in Ron Howard’s office, which plays to the oblivious strengths of two of my favorite characters. It’s a great sequence that actually uses miscommunication in an interesting way, and the elevator ride back to the lobby serves as excellent punctuation to one of the strongest scenes in the entire season.

But then it’s over, and we’re back to where we were before this very welcome interlude: the Fantastic Four musical.

Arrested Development is devoting an entire, extra-long episode to watching one character attempt to stage a Fantastic Four musical.

I can type variations on that sentence over and over again, and it’ll never make a lick of sense to me.

I think it’s safe to say that whatever story Mitch Hurwitz intended to tell with these episodes (and I’m not playing dumb…I’ve watched the entire season and I still don’t know), 15 super-sized installments is way too much space in which to tell it. And there’s no better evidence of that than the existence of “Smashed,” which moves no story forward, says nothing about its central character, isn’t funny, and totally botches what could have been a very interesting relationship between Tobias and DeBrie.

Watching “Smashed” the first time, I felt like the Mystery Science Theater 3000 crew when they’re cut to in this episode: utterly speechless. Of course, I have no idea why they cut to those characters watching a film if the writers literally didn’t have any lines for them, but if you were to cut to me halfway through the episode, you’d have seen pretty much the same thing.

The Tobias and DeBrie pairing was problematic from the start since DeBrie seemed more like a caricature from a lame anti-drug propaganda special than a human being, but that didn’t mean the relationship was beyond redemption. After all, Tobias ultimately just wants somebody who will support him in his delusions. He’s not a bad guy…just completely unaware of who he is, and the world around him.

Likewise DeBrie is an outcast, unloved, who also wants to find someone who can understand her and treat her well. The fact that she’s got a host of personal (and medical) problems works well here: these two social dregs meet, and they might stay at the very bottom but at least they’re there to support each other.

Does that sound like the funniest pairing in the world? Admittedly, no…but it’s at least an interesting one, and it would give the writers a chance to do something new with the character. When’s the last time we saw Tobias happy with someone? Where would it go? What would it look like, and how would he act?

I guess, in a sense, we have an answer to that question: he’d write a musical about the Fantastic Four. Because why the fuck not.

For all the potential good character work set up by “Flight of the Phoenix” and “Colony Collapse,” the rest of this season really feels content not only with not exploring its characters, but with not even understanding them. They don’t know what to do with Tobias, so he’s a pedophile making musicals of comic books. And if any of that sounds at all like the Tobias of the first three seasons to you, then I’m not sure what show you’ve been watching.

Instead of exploring their relationship, we have them reunited just so he can get to writing a musical for her to star in. There’s definitely the shadow of some character work here, as Tobias’s obliviousness keeps him from seeing that she doesn’t want to do this, but that’s something we see in its entirety within about a minute and a half, so it makes for a pretty bad crutch if that’s the only thing you do with the character for thirty-three minutes.

And that is indeed the only thing they do with the character for thirty-three minutes.

The rest of “Smashed” is given over to rehearsing for the play, which is tragically light on jokes, but heavy on DeBrie falling over and having bloody a nose.

I was reminded many times of the “Zoo Animals on Wheels” episode of Get a Life, which also shows us a terrible stage production, from rehearsals right on through opening night, but finds funny things to do with its character along the way. The joke, yes, is that the play is bad, but that’s not the only joke: the joke is that this character is in this play, and so the humor we get is filtered through a very specific lens, and it’s one that is recognizably, therefore, part of the show’s universe.

The play means nothing. A full episode’s worth of build-up for a play so meaningless they couldn’t even think of a way to get the finished product into the episode without playing credits over it.

And no, the fact that the narrator makes a winking comment to that effect doesn’t redeem it, any more than the same joke redeemed the pointless montage in “Making a Stand.” (Though, to be fair, “Smashed” makes “Making a Stand” look like goddamned Hamlet.)

Oddly, though, this episode does manage to achieve something: it takes two of the most go-nowhere plots in a season full of them, and combines them both to actually make them funny. That’s where the whole scene with Michael and Ron Howard comes in. The movie plot and the play plot twist together for one great scene of character interplay…right before they twist apart again, to the detriment of each.

Here’s why I find that interesting:

For all my talk in these reviews of narrative and story, the fact is…those things don’t matter. At least, they don’t matter if you’re laughing. They’re nice to have, of course, but that’s not the reason we’d watch a sitcom. They might be the reason a particular sitcom becomes a favorite, but unless you’re also laughing, you’re probably not going to stick around long.

So yes, I might complain that a plot goes nowhere or has no conclusion, but that’s because I’m not laughing. The season hasn’t given me any reason to care about Michael’s movie, and it’s given me even less of a reason to care about Tobias’s play, and so I get bored and frustrated when I’m forced as a viewer to watch these humorless stories unravel.

However in that scene, and during the painful elevator ride that follows, I do care about those plots. I like them. I enjoy them. Why? Because I’m laughing.

One feeds the other. If I laugh, I’m on your side. I want to see those plots unfold because I want to keep laughing. When I’m not laughing, it’s a chore. Sticking that scene into the middle of this episode made that distinction very clear, and I don’t think it’s any coincidence that that scene is about two great characters bouncing off of each other; the Bluths simply don’t work as well in isolation.

As much as people talk about the way this season interlocks, I don’t think it actually does.

It doesn’t interlock…it just coexists. Every so often one character will cross paths with another and it feels so much more exciting for a moment, because it feels like something might actually happen. Sometimes you even get a great joke out of it.

“Smashed” is terrible. And it may not even be the worst episode of the season.

Oh well. Tommy Tune as Argyle Austero is an example of a cartoonish character that works, but the fact that every character is a cartoon means he lacks this distinction, and so he just feels like another thing tossed into the stone soup. He’s funny enough, but the writers have no idea what to do with him.

Sounds like he fits in pretty well with the rest of the main cast, then, huh?

Episode 9: “Smashed”
Central Character: Tobias
Other Family Appearances: GOB, Michael, Lindsay, George Michael (voice), Lucille
Most Clumsy Reference to Original Run: “I just blue myself again for the first time in five years.” That’s two grammatically corrupt references to this in a row. Please don’t go for the hat trick, “Queen B.”
Scene That Most Needed Tightening: Tightening implies that some editing would make the scene better, and I’m not sure that applies to any of the Fantastic Four material so who knows.
Best Line / Exchange:

MICHAEL: We’ll see each other a la carte. You know? Like the $18 baked potato you ordered that you didn’t touch.