I hate Upworthy. I wish I could say that I only hate what Upworthy does, but that’s impossible, because there’s nothing to Upworthy apart from what it does. And what it does is manipulate. And that’s damaging.

First of all, I will say that it’s nice that there’s an outlet devoted to spotlighting positive things. (Hold tight to this sentence, because I’m going to more or less dismiss it later on.) But I do wish that that outlet wasn’t this outlet.

Upworthy is all over the place. People share links from it constantly, and I almost never have to look to see what site the links are from; the headlines give it away.

Look at the examples above. I didn’t pick and choose…those are three side by side articles spotlighted on the front page of Upworthy as I write this post. Are those distinguishable in any way from the presentation of spam advertisements you’ll see on any given website?

You know the ones I mean. “Insurance agents do not want you to know about this trick to lower your rates.” “Doctors are terrified that you will learn this secret to healthy weightloss.” Even, “Here’s how you can impress her…the way it matters most.”

They’re evocative statements just this side of comprehensible, and they say precisely nothing while promising a whole lot of everything. It’s what online marketers call “clickbait.” It’s what you probably know as “bullshit.”

It’s not the content that matters. Contrary to Upworthy’s ostensible mission, the site doesn’t care about giving you anything worth reading or seeing…it only cares about getting you to click. The fact that it spotlights positivity in a traditionally negative world is just set dressing…the equivalent of a car dealership hanging up a banner that says “Eco-Friendly.” It’s a way to get people to think that something is different here — and positively so — when, really, there’s no difference at all.

Again, take a look at three other features on the main page. (Full disclosure: I did swap out one story for another…not because the actual image in its place didn’t demonstrate my point — it did — but it used an individual’s pain and suffering to do so, and I did not feel comfortable perpetuating that.)

There’s no difference between this and worthless spam marketing. Any product or service worth purchasing won’t have to hide behind vague incentives to click through; if it was something worth having, they’d tell you what it was up front. Upworthy doesn’t tell you what it is up front. It’s always “This ______ will blow your mind.” “You won’t believe what ________ said.” “This is a video you need to see.”

None of it means anything. Perhaps that fact would blow my mind. Perhaps I wouldn’t believe what _______ said. Perhaps that would indeed be a video I’d enjoy. But I’m not going to click it. Why? Because you’re not asking me to click it…you’re trying to trick me into clicking it. And that’s precisely what people do when they’re hiding something.

Look at the actual examples. In the middle article of the second row, what would be wrong with revealing the topic? Let’s assume it’s something relatively mild, like divorce. If they made that clear, people interested in reading some commentary about this poem on divorce would click it. Granted, fewer people would click it, but that’s because the folks who don’t will know ahead of time that it’s not an article that interests them.

Respectable media gives its audience credit, and letting them decide what they’d like to view or read for themselves is a very obvious form of credit. Upworthy does not give you — yes, you — any credit. It believes you need to be misled and tantalized into finding things you’ll enjoy. And that is, as you know it, bullshit.

I understand the mentality here. Sesame Street was conceived with a similar mindset: advertisements are flashy and funny and engaging, and they work particularly well on children…so why not use the language of advertising to sell them the alphabet?

It worked there. It still works there. I have no problem with that there. So why do I have a problem with someone using the language of advertising to sell “good news” to people?

For a few reasons. For starters, it is a respectable goal to direct children to the things that will enrich them and prepare them for life. The alphabet, basic math, vocabulary words, lessons on sharing…these are the things Sesame Street “sells,” and it sells these things because they’re not the sorts of things children would seek out — or be given — on their own.

Upworthy doesn’t have that same excuse. It isn’t “selling” anything of value…it’s farming your clicks. As evidence of that, ask yourself how much original content Upworthy produces. The answer is zero. It produces no original content. Whereas something like Sesame Street embraces the positive aspects and artistry of advertising, Upworthy embraces the laziest, the most manipulative, and the worst. It’s begging you to click, but if you do, all you’ll find is the work somebody else did elsewhere. In short, they’re stealing clicks from the people who actually did these positive things that Upworthy claims to be celebrating.

They’re profiting off of the work of others. And while they do typically cite their sources, that doesn’t do much good, because Upworthy is reproducing the content wholesale. There’s a link to the original source, but why would you click it? It’s all right here. Far from offering incentive to visit the site in question, they’re collecting all of the incentive and depositing it here, on their own site. Upworthy’s saved you the hassle of actually having to visit the person, place or thing that’s supposedly so inspiring. How nice of them.

It’s no different from a hypothetical site that would crawl the internet for other people’s art and host it locally without permission. Yet when something like that occurs, we get a better sense of the unfairness. We know it’s wrong to download somebody else’s art and upload it ourselves without permission. There’s no question…and if we came upon a website that did nothing but that, we probably wouldn’t bother coming back. It would be obvious junk.

Upworthy, however, seems content to hide behind the “news” side of things. And, to be honest, news organizations do often share sources, and sometimes entire pieces. There’s nothing inherently wrong with this…the AP exists for a reason, after all. But if The New York Times were to copy and paste an editorial wholesale from The Economist without permission, there’d be a rightful shitstorm brewed up.

Upworthy does this all the time, except that they’re swiping content from smaller outlets, and oftentimes independent bloggers and vloggers. There’s no shitstorm, because the audiences are smaller and the stories scroll off the page fast enough that there’s not much time to take action. By the time they get around to responding to your request for removal — if they do — the damage is done. You did, wrote or said something that deserved a larger audience, and Upworthy stole that audience from you. Maybe they’ll take the link down, but by that point the moment has passed, and it’s scrolled down far enough that people stopped seeing it anyway.

That’s…not a particularly “positive” atmosphere, is it?

There’s also the fact that Upworthy’s snatch-n-grab approach results in things getting spotlighted before there’s been anywhere near enough time to determine if it was up-worthy. Take, for instance, this homeless veteran makeover malarkey. Upworthy loved it and pimped it everywhere. Which was great, because poor Jim Wolf’s life fell apart immediately following this session, when he went back to drinking, was arrested, and remained homeless and alone, and nobody had to worry about that because they were still being inspired by this manipulative video full of lies.

If Upworthy wants to use its status as a “news curator” in any respectable way, it needs to issue retractions the way anyone else would. If a website reported the death of some public figure that was later revealed to not be dead, they’d retract it. Of course they would; there’d be no discussion about it. How could there be a discussion about it? Even if that website hadn’t written the original piece, it would be clear that they need to retract what was said. After all, they reported on one thing and then found out the truth was something different.

Upworthy wants to be the positive alternative to general news curation, but it doesn’t issue retractions when the positive content it swipes from elsewhere turns out to be bunk.

Why not? Easy. They don’t care. They only want you to click.

Upworthy’s a poison. It manipulates readers, tricks visitors, and robs from the smaller outlets that are actually doing the work, all in favor of turning a greater profit from the increased traffic. It doesn’t do any good, and it contains literally nothing that can’t be found elsewhere.

Oh, but it does take the time to spotlight the positive news stories in such a negative world. Right? Isn’t it nice to have a news outlet or curation service that bothers to report on positive things?

Sure. It is. And we’ve had it all along. I’m not sure I’ve ever sat through a news broadcast that didn’t feature uplifting personal interest stories or reports on some seasonal puppy parade or something. The myth of disproportionately negative reporting is exactly that; it’s a myth. We tend to remember and focus on the negative stuff because that’s what sticks with us by nature. If a woman is murdered in a local park, we’ll remember the story about that, even if the same amount of ink, or more, was given over to the winner of a chili cookoff.

Yes, professional news outlets do report on positive things. What’s more, they actually check their sources, and are held accountable for what they get wrong.

On top of all of that…this is the internet. You can find anything you want. If you want uplifting stories they’re never more than a single Google search away. You can find them. There are good people everywhere, and you can seek them out in a way previous generations could not.

You don’t need Upworthy to do it for you. And you definitely don’t need them to profit off of treating you like an idiot while they do.

Upworthy is greed. It might be greed with a smile, but in the end it’s still greed. Start circulating the positive stories from the sources that actually produce them, instead of contributing to the profit margins of a company that swipes them. That would truly be upworthy.

—-
EDIT: I MEAN JUST LOOK AT THIS SHIT COME ON 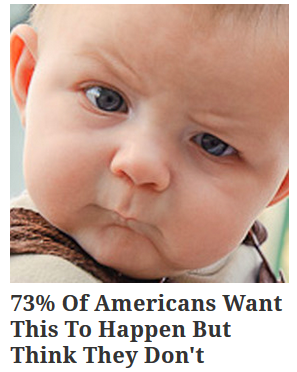