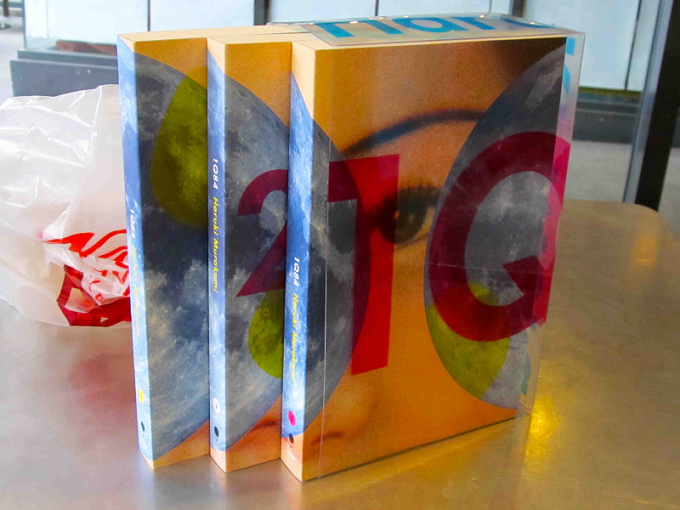 Toward the beginning of this month, I posted something about 1Q84 by Haruki Murakami. I’d hesitate to call it a review. I’d also hesitate to call it a collection of thoughts. If anything, it’s a loose assortment of unconnected observations. Of course, at that time, I had only read the first volume.

I’ve now read the second, and I’m no closer to having my thoughts collected.

1Q84 is a deliberately confounding work. There’s nothing unique about that fact, but there is something unique in just how playfully it manages to find new ways to confound. To be frank, I’m impressed by just how consistently baffled it manages to make me when barely any passing time is unaccounted for. It doesn’t take a very skilled magician to pull off an illusion as long as he keeps you from looking in the right place. That’s basic sleight of hand, and on its own it doesn’t qualify as art. It qualifies as technique.

But keep the reader focused on every detail and still manage to pull off the same trick? That takes a master.

Murakami has every opportunity to cut away from the action when it’s time to obscure, to obfuscate. He has dual protagonists. When it’s time to confuse us about Tengo, he need simply cut to Aomame. And, of course, vice versa. And while there would be nothing wrong with that, he doesn’t do it. When our perspective shifts back we are either meticulously caught up on everything that’s passed since we last saw this character, or we repeat the last few lines of that character’s tale to fix the scene precisely as it was before we left.

That takes some guts, and the fact that it works says a lot about the trust it’s worth investing in our author.

All of this, in case you couldn’t guess, is just my way of explaining the fact that I still couldn’t tell you what 1Q84 is about. In many cases I could barely tell you what’s happening…and for a book that never leaves a detail untold, that’s incredible.

The only other book coming to mind that relates minor advancements of plot so meticulously is Ulysses, which follows two main characters as they work their way around Dublin over the course of a single day. Yet Ulysses doesn’t quite remain grounded…it flits away on overt narrative trickery, weaving dreams and fantasies and formats together into a deliberately disorienting whirl. Joyce’s arms flail as he performs his trick. He gets away with it because there’s so much you’re trying to focus on. Murakami barely moves a muscle. He lets you take your time and study anything as deeply as you like. The intense focus becomes a kind of disorientation that we’re not used to experiencing…and that’s a hell of a feat.

It’s also thematically appropriate for 1Q84, which takes for one of its themes the concept of subtle, imperceptible changes having large impacts that you only can only measure in retrospect. There’s no preparing yourself for what’s to come any more than the characters are able to prepare themselves. That’s not the way this world works.

Throughout the course of the second volume, the major event seems to be Aomame’s assassination of a man who presides spiritually over a mysterious cult. The first part of the volume builds up to the murder, the middle of the volume takes its sweet time describing that murder, and the wind-down of the novel considers thoroughly the implications of that murder.

One gets the sense by the end of volume two that it almost doesn’t matter what happens next…at least, no more than it mattered what happened last. Or what might happen a thousand years from now.

Events, however closely we study them, are pearls on a string. They are there. They are side by side. Any importance we assign to them comes from us. One day we will be gone. By default, they will all be equally important: not important at all. Aomame’s murder of a child-raping guru is described with exactly as much detail and exactly as little empathy as the breakfast she makes in the morning. One sounds more important than the other. We assign different levels of importance to each of them. But, one day, we will be gone. From enough distance to allow detachment, they are of equal importance.

1Q84 doesn’t have to work very hard to get us on Aomame’s side. We want her to kill him, and we want her to get away with it. After all, the accounts of what he’s done to a very young girl named Tsubasa — and the knowledge that there are other girls whom he abuses in the same way — are repulsive. Murakami doesn’t describe it with any more significance than he does any other kind of sex, though. In fact, in terms of narrative he assigns it less significance, as we only hear about it second-hand, through dialogue.

It’s unspeakably awful…and it remains unspoken, by the narrator at least.

Yet by the time we enter the volume’s final third, we’re not thinking of this spiritual Leader the same way. Neither is Aomame. To give it away wouldn’t spoil anything so much as it would needlessly complicate the observation. Suffice it to say that subtle changes make a world of a difference. In retrospect, anyway. After the wheels have already been set in motion. When the momentum that pulls you forward is no longer your own. When you have the knowledge you wish you had at the start, now that it’s too late to use it.

There are a lot of shifts of this kind, many of which involve the slippery concept of fiction itself. Tengo consciously conflating a visit to his dying father with a story he reads about a town of cats. The world around these characters seeming to integrate details from two fictional novels…one of which is still in the process of being written. The lyrics to “Paper Moon.” It’s not a question of how fiction manages to influence the real world, but of how deeply, how naturally, how irresistibly.

It’s tempting to read 1Q84 as a novel about itself. It’s more than tempting, actually; it’s seductive. But doing so — or doing so exclusively — robs the tale of its terrifyingly playful approach to internal resonance. The overlapping details, the historical layering, the cycling in and out of important characters, the substitution of raw emotion for uncomplicated sci-fi and then back again…a human you knew being replaced by a chrysalis that eventually opens to reveal the same human it replaced.

It’s brilliant. It’s scary. It’s unnerving. Moments of violence are weighted the same as moments of calm. Characters read Chekhov to each other at night or chain police women to beds in love hotels and strangle them. Those that seem innocent have the most dangerous motives…the creepiest ones just want to help. Cause and effect get scrambled. The good guys do awful things. They might not realize it. We might not realize it. Not until it’s too late to stop it, anyway.

Everybody’s got good intentions…it just depends upon your perspective. Subtle shifts and changes result in completely different worlds that could never be mistaken for one another.

Not that either one could possibly be more important. One day we will no longer be here.

Like the song says, it’s “just as phony as it can be.” It also says that it “wouldn’t be make believe if you believed in me.” Which sounds very nice.

The darker, unsung shadow of that line reveals that without belief, without buy-in, without the conscious decision to assign something significance, it’s nothing.

Whatever it is…or whatever it could have been…is nothing.

We don’t decide that anything is meaningless…we decide what’s meaningful. And then there’s…everything else.

1Q84 has me thinking a lot about everything else. Because all it takes is a subtle shift in perspective to reveal that it’s only a paper moon. And once you know that, there’s no way of shifting back.

…at least, not by the end of the second volume.