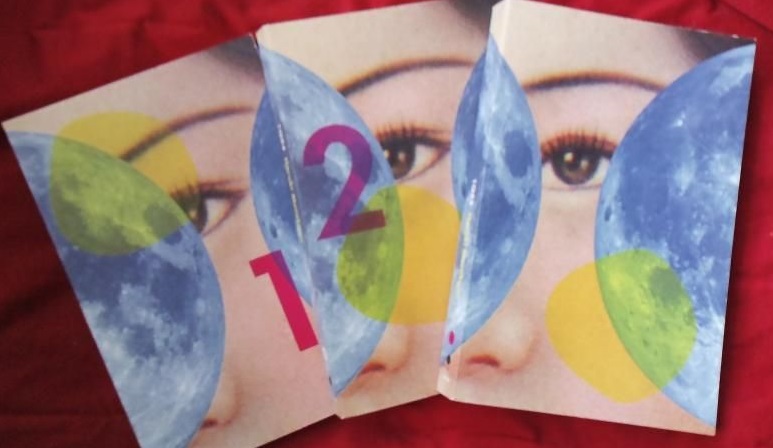 Something strange happens to me every so often: a piece of art starts following me around.

Not literally. Or probably not literally, anyway. But it feels like something’s calling my name…and the more I ignore it, the harder it tries to get my attention. One my most vivid memories of this happening was with the film Ghost World.

I was with some friends at the video store (remember those?) deciding what to rent (remember that?) and I saw the box. Something about it captured my attention. I couldn’t have explained it then and I still can’t explain it now. It was just two girls on a white background with a vague title. The back of the box didn’t make it sound any different than any other teenage misfit film, and the images from the movie didn’t help differentiate it either.

But, somehow, I realized — knew — that there was something here. I didn’t suggest renting it, because if my intuition proved wrong I would have felt pretty embarrassed. Later on I was in a different store with a different friend and saw it for sale. I asked if he’d ever seen it, and he looked at me like I was joking. “Why would I have seen that?” he asked.

But something was pulling at me. Telling me I needed to see that film. I don’t know what it was. But I went back and I rented it, and watched it alone. (That was a thematically appropriate context for what I was about to see.)

I loved it. I still love it. I don’t know that it would make my top 10…though it might. It would surely make my top 20. It was a deeper, richer, more profound film than most of what I had seen up to that point, and it was certainly deeper, richer and more profound than the box — which had been my only experience with it — suggested. So why was I so strongly compelled to watch it? How did it get its hooks in me? Something had called out from behind a wall…but what was it?

I relate this story because recently, last month actually, I had a similar experience with a three-volume novel. 1Q84 caught my eye because of its handsome packaging…it was a nice boxed-set, and the title made me think it was some kind of special edition of 1984, another one of my unrivaled favorites.

So I picked up the book and realized pretty quickly that it wasn’t that. The cover art (seen above) told me nothing. There was no description whatsoever on the box. It was sealed so I couldn’t flip through the pages and see whether or not it was the kind of writing I’d enjoy. It was just a title and an author I’d never heard of.

And yet…I kind of wanted it. Not enough to buy it on impulse, I guess. Or maybe I was just worried that I’d be dropping $35 on an extremely long unknown quantity. (Not an unreasonable fear.)

The next time I went to the book store, I saw it again. The same copy. I know, because there was only one. I took a photo of it and posted it to Facebook. I could have researched the novel online, but in case I ended up reading it at some point I didn’t want to risk spoiling something, so instead I just asked my friends if they’d read it.

Several of them had, but the consensus seemed to be that I should pick up a different Murakami book. This one was padded, not quite his best, not a good starting place, etc. I appreciated their input.

…but I wanted this book. Even though I still knew nothing about it, and the other books would be both shorter and cheaper. Every time I passed it, it would make eye contact. I woke up one morning and drove right to the book store to buy it and read it that day. Something had called out to me from behind a wall. I couldn’t tell you what.

And, again, it’s great. 1Q84 is a fantastic read. I finished the first volume a couple of nights ago, and maybe I’ll post when I finish each of the three. I’m about 390 pages into a tale that I couldn’t begin to explain. When I posted on Facebook that I was reading it, another friend asked me what it was about. I said, “Perspective?” I honestly didn’t know. I still don’t know. I think he thought my response was dickish, because he said, “Fine, I’ll Google it myself.”

I wasn’t being dickish. I really wasn’t. I have no idea what it’s about…but perspective seems like a decent guess. Granted, that’s more of a theme than a plot. But I don’t know what the plot is.

But, typically, there’s still a discernable narrative thrust. Maybe there will be here, as well. I am like one of the characters, staring into a very cloudy night waiting for the sky to clear so that I’ll finally be able to see what’s up there and get my bearings.

For now, though, I can find solace only in how the story is told, unaware of where it’s headed, or even where it begins. There’s an almost frightening warmth to the text, which describes some truly horrifying things in such a way that it feels like you’re listening to a gentle voice reading to you from beside the bed. Yes, it’s a translation…but it’s a warm, friendly, soft translation that doesn’t hit you with corners and jagged edges. The translation must be a piece of art in itself, because very rarely do I find myself wondering if something was lost in the transition between two languages. Instead I marvel at how much is still there.

The chapters alternate between two central characters: Aomame, a skilled but damaged assassin, and Tengo, a math teacher who harbors dreams of being a fictionist. Their stories do not directly overlap — at least they don’t directly overlap by the end of volume one — but similar imagery occurs. Characters hear the same song. Two little girls speak of the same mythical creatures. There’s a lot that happens on one side that informs our reading of the other, and which braces us for a danger that may not come, and which certainly won’t come in the way we expect it. Perspective.

Aomame befriends a police officer who does not know what she does for a living, and draws nearer her newest target: the powerful, cruel, unseen leader of a mysterious cult. Tengo befriends an emotionally distant young writer and re-writes her promising manuscript…which is published to great acclaim and the young writer’s unexplained disappearance.

These are the things that happen. And these are not the things that are important. If they were, I would be disappointed that almost 400 pages have passed and I couldn’t tell you much more than that. Instead, I’m 400 pages into an only vaguely familiar forest, and while it’s dark, and it’s frightening, and I’ve heard rumors of what lurks inside, I want to take my time. I want to remember it. I want to be challenged by it, and to challenge it in return.

1Q84 might not be Murakami’s best work. I wouldn’t know. But it’s a powerful piece of writing that manages to move as it repulses, and manages to be both direct and oblique. It rewards you for paying attention and it punishes you for caring.

It’s a gorgeous nightmare from which you don’t want to awake. And while I still don’t know what it is that calls out to me from behind walls, I hope I have the chance to thank it some day.