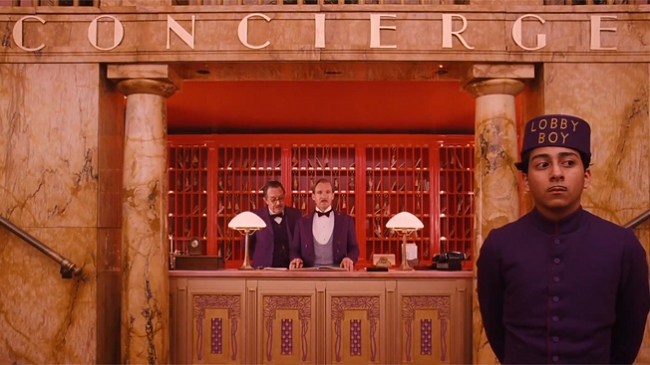 Surprising no-one, I love the new Wes Anderson film. I’m going to get that out of the way right now. And I honestly believe this has every potential to be his masterpiece. (Of course, the man’s made at least three strong contenders for “his masterpiece” by now, so I’m positive this is a question that can’t be seriously discussed for another few decades.)

I expected to like it. The trailers looked great, it’s full of fantastic actors, and it was the first full-length screenplay that Anderson wrote solo. Those are all very promising components, and I didn’t expect they’d disappoint.

The surprise, however, came with just how good this movie turned out to be. It’s a moving, rollicking, tragicomic juggernaut of a film, and I haven’t been this deeply affected by a movie-going experience since…well…The Life Aquatic With Steve Zissou.

The plot of The Grand Budapest Hotel is so layered, so dense with momentum, so quick to evolve and so vast in the span of time it covers that I could fill this entire review with the most basic of summaries. There’s a reason the trailer seemed so schizophrenic; the movie doesn’t stay put.

As such, I won’t be saying much about the plot of this film, so don’t fear spoilers. I’m going to talk a lot about what I got from the film, but not necessarily much about what was visually on the screen.

Suffice it to say, however, that the core of the film is the relationship between Zero — a young, penniless immigrant who becomes employed as The Grand Budapest’s lobby boy — and his boss, the concierge M. Gustave. The two get wrapped up in a caper, a mystery, a scandal, and a creeping international conflict, all of which sets the stage for expected comedy, and unexpected profundity. 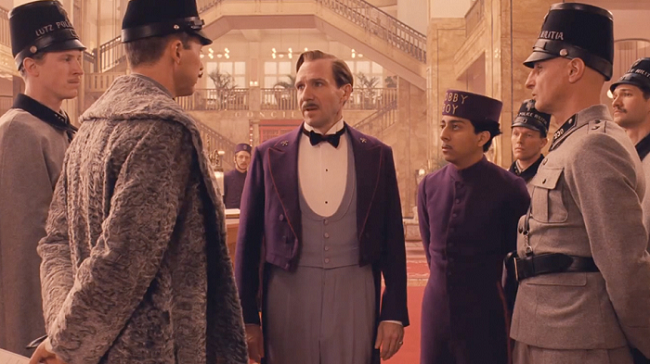 Ralph Fiennes plays Gustave with an impeccably charming air of self-importance, and at first he seems to be a classic Anderson dick in the tradition of Royal Tenenbaum or Steve Zissou, and his terse, meticulous demands of perfection seem to channel both Max Fischer and Francis Whitman. However Gustave reveals himself before long as something much more complex; he’s a dick for a noble purpose. He’s a dick because that’s the only way he knows to bring comfort to those around him. And it works.

Under Gustave’s supervision, The Grand Budapest flourishes. He might be condescending and overbearing to his staff, but it’s because Gustave knows one of humanity’s saddest secrets: societal order is not achieved…it is imposed. And if you don’t impose the order as firmly as possible, it’s a matter of time before somebody else will impose theirs upon you.

With The Grand Budapest, Gustave has imposed rigid order upon an isolated society of his own making. (It’s not just visual quirk that sets the palatial hotel upon a largely inaccessible mountaintop.) Gustave is, thematically speaking, a dictator…but he dictates benevolence.

A darkness intrudes, however, and it intrudes on multiple levels. From a creeping war — which first claimed Zero’s family and threatens to claim the fictional Republic of Zubrowka, in which this film is set — to the more personal tragedy of the murder of Gustave’s elderly lover.

There’s a brilliant moment early in film during which Gustave learns the news from the morning paper, letting his eyes roll past the massive headline announcing the invading army down to the photograph of his now deceased ladyfriend, announcing her death. It’s a perfect illustration of the way our personal tragedies, though relatively small, will always hit us harder than the larger, impersonal ones…even if it’s the larger, impersonal ones that should be demanding our attention.

It’s also a nested tragedy — one murder within the boundaries of large-scale war atrocity — which contributes to one of the movie’s main themes: layering. It’s not uncommon for Anderson’s work to see gestures, statements and plot points operating on multiple planes, but it’s never been brought to the fore in quite this way.

The opening scene of The Grand Budapest Hotel sees a young girl in a graveyard, reading from a book. That book contains the action of our film, so the young girl reading it is layer one. Layer two is the book itself, which is narrated by its author and purports, at least, to be non-fiction. The author recounts meeting a much older Zero, who tells him the story in conversation, which makes that conversation layer three. The flashbacks themselves are layer four, which is where we spend most of the film: watching the events play out. And any scene in which Zero is not present must have been relayed to him second hand, at a later point, giving us an ultimate story that’s at least five layers deep, and potentially subject to false memory or self-censorship at any one of those levels. 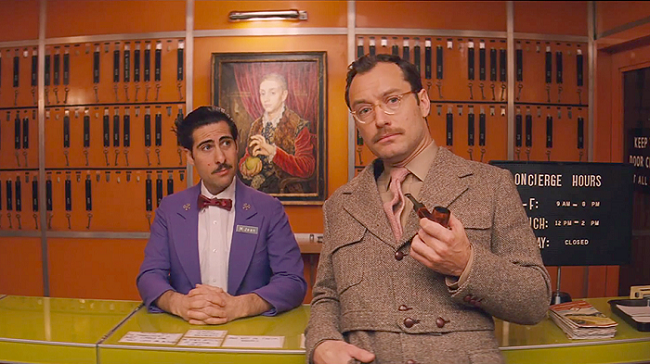 In evidence of that claim, the film has the older Zero admit that he’s not comfortable discussing Agatha, as it’s too painful. This would be very fair if he were speaking only about an old, lost love, but as she’s an integral part of the story we are hearing / reading / seeing, it’s a potentially problematic omission. We catch glimpses only of the less painful moments he spends with her, and, of course, the ones necessary to our understanding of the plot. The rest — including what must be the most painful moment to him — is either left unspoken or referenced so briefly and obliquely that the words do not coalesce into a visual portrait for us…it’s the conversational equivalent of something happening off-camera, and so that’s exactly what it does.

This deliberate obfuscation of the love story may be a response to Anderson’s previous film, Moonrise Kingdom, in which the love story was front and center, and which we witnessed unfold with unblinking eyes, sparing us nothing, just as the couple in question was spared nothing.

It wouldn’t be the first time Anderson directly replied to the themes of one film with the themes of his next. Rushmore was about a young boy reaching beyond his lowly station in life, with a father who loved and supported him in his ambitions to a fault. That was followed by The Royal Tenenbaums, which followed grown children who had tumbled from their higher stations in life, with a father who did not support them and whose love was debatable. Then The Life Aquatic, which had a father-son relationship as its very core and as the driving force behind every event in the film, was followed by The Darjeeling Limited, wherein the never-seen father died before the movie began, leaving the brothers Whitman to limp along in their own ways without him. (The Darjeeling Limited also begins with the father figure from the previous film, Bill Murray, being left behind by the train that bears this film’s title. It’s not the most subtle thing in the world, but it does what it needs to do.)

In fact, much of The Grand Budapest Hotel feels like a response to Anderson’s previous films, with moments of bleak darkness, unexpected violence and genuinely chilling suspense working their way into a movie by a director who is by and large pretty life-affirming.

The darkness in Grand Budapest hits twice as hard because it’s also Anderson’s most overtly comic film. Sight-gags abound — all of them perfect — and Gustave is nothing if not a fountain of caustic one-liners. There’s a cartoony set-piece that kicks off the final third of the film (arguably two cartoony set-pieces), but all of this feels like the film’s own coping mechanism for the darkness it has to face. It’s a world coming apart, and it’s already as good as gone. The film has a sense of humor about its own internal tragedies, because, if it didn’t, what would it be? It’s humanity’s way of keeping the terror at bay. It’s necessary. And it’s heartbreaking.

Moments of broad comedy give way to tragedy, which then evolves into horror…and is then joined by another moment of comedy. There’s no better encapsulation of this than Gustave provides himself, while behind bars: he tells Zero of a fellow inmate named Pinky who ridiculed him, which grew into a fistfight, which itself ended with both men seriously battered…but since then he’s come to consider Pinky a dear friend. Comedy, tragedy, horror, comedy. It’s a cycle that recurs throughout the film, and it keeps us from ever feeling confident in the balance.

And is there really any balance? The stalled cable car creaks emptily to the pulse of the soundtrack, which is lovely, but what’s to keep it from just…letting go? 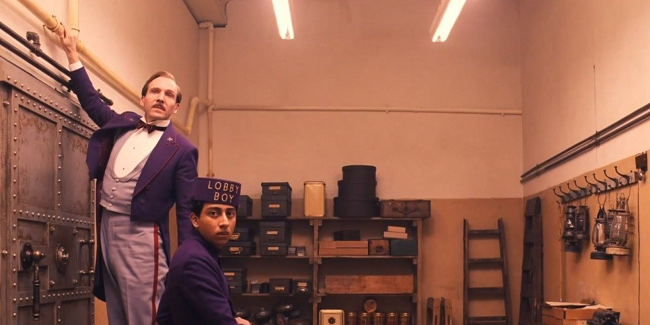 It’s all cycles and layers. Layered cycles, and cycled layering. Poor Zero begins his apprenticeship having lost everything, and though he rises — in more ways than you might expect — we know from the way other things have worked in the film that he will come full circle. In fact, his very name is emblematic of a circle, and is synonymous with nothingness. And the film knows it.

Humanity is an agreement. That might be the main theme of The Grand Budapest Hotel. We create the world, even if we don’t. Everything we do and everything we don’t do is responsible for the society in which we live, whether that society is an isolated hotel, a fictional republic, a war-torn continent, or an era rapidly approaching antiquity.

The Grand Budapest Hotel was Gustave’s gift to humanity, but it couldn’t last. An older Zero observes that Gustave’s world was gone before Gustave even entered it. There’s a reason he enjoys romancing elderly ladies so much: it’s not just the attention — though undoubtedly he does like that — but it’s the desperate clinging to a fast-fading past. It’s a chance to hold with both arms the dwindling numbers that can still recall a brighter day.

And there’s a reason that the death of his lover is what sets the entire plot into motion, and thus the entire nested crumbling that constitutes the whole of the film. It’s an intrusion of reality, a blunt reminder that humanity is an agreement, and it only takes one person to act in violation of that agreement for everything to come falling down.

While Gustave is traveling with Zero to see his lover for one last time before she’s buried, the train is stopped and boarded by military policemen. A problem with Zero’s papers results in a rough moment of brutality, but it is stopped by one of the MPs, who recognizes Gustave as a good man who had shown him much kindness when he was a boy.

The train pulls away, and Gustave, nose bloodied and hair disheveled, begins to use this as a teachable moment. He lectures Zero about the importance and magnitude of these small flickers of humanity…but quickly abandons the lesson in favor of a defeated, heartbreaking, “Fuck it.”

There is a lesson to be learned from what happened there, but, unfortunately, it isn’t the lesson Gustave wishes it to be.

Reality encroaches. Agreements are honored, but more rarely, and only this time. Not everybody who imposes order does it for the good of others.

Gustave’s world was not only gone before he entered it, but before we entered it. By the time it’s printed in the book being read by a young girl in a cemetery, The Grand Budapest is already demolished. It no longer exists. Whatever order applied there at whatever time is no longer relevant.

At least, not unless its own faint flicker of humanity inspires another.