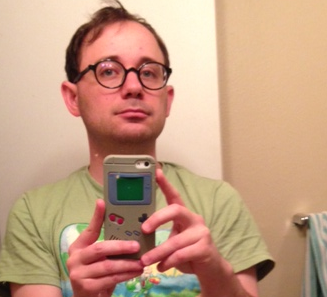 These glasses were made available at no cost to me in exchange for a review. Details below.

I try to be pretty choosy about the products I review here. A film or book or album is always fair game, as far as I’m concerned, but products are a little hairier.

As some of you know, I lost my job a couple of months ago. It was nothing personal…just some unfortunate downsizing, and the president of the company wrote me a great recommendation. Great for the ego, but bad for the wallet.

As even more of you know, I’m insane…which is why I dove right into a 24/7 job hunt. I qualified for unemployment, but I didn’t want that. I knew I could do this on my own, and I figured that if I did have money coming in (however small an amount it might have been), it would reduce my incentive to find steady work.

Writing this, today, I have found employment. It’s contract work, but I love it, and I hope it turns into something full time. That part might be a story for another day, though.

Why all the setup? Because losing my job didn’t scare me into thinking I wouldn’t be able to eat, or pay my rent. I’d saved up enough that that shouldn’t have been a problem for a while, and even then I know my friends wouldn’t let me sink into starvation or homelessness. What did scare me was that I might get very sick, get in a car accident, or things along those lines. If that happened, I’d blow right through my savings (and, perhaps, then some) and be in dire straits far sooner than I expected. It’s scary that one big, unexpected expense can destroy you so easily.

As a glasses wearer, I have one more thing to be worried about. While I’m careful with my glasses, you never know what can happen, and if my roommate’s dog sat on them or something…well, that would be a several hundred dollar expense I simply couldn’t afford.

SelectSpecs.com got in touch and offered me a pair of glasses in exchange for a review. No money changed hands, though I was given a voucher for any product up to $45 in cost. It seemed like a great way to get a backup pair, and while for $45 I knew not to expect much, I figured it couldn’t hurt. 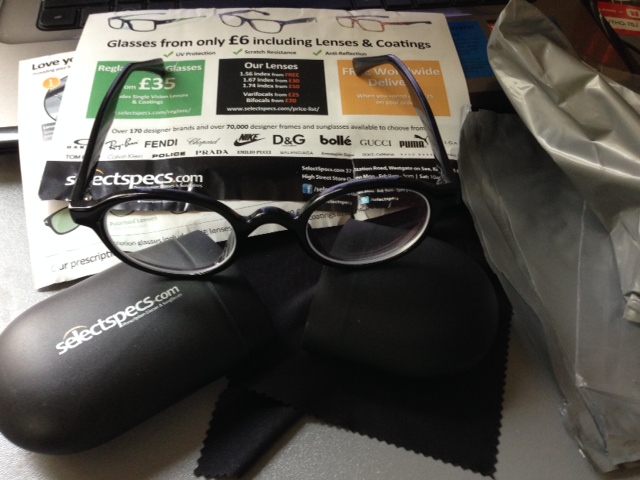 I was very surprised. The glasses I chose were closer to around $25, and they’re of a very good quality. That’s me wearing them in the first picture up there, with a case of bedhead because I forgot to write this review last night.

The second picture shows what I got in the mail. They arrived certified, which was nice, and though the packaging is just a thin, plastic envelope, the glasses were in good shape…due, no doubt, to the fact that they shipped in a complimentary case. There were also some inserts and guidelines, as well as a microfiber cleaning cloth, and overall I was impressed by how much you got for such a small expense.

The glasses themselves are plastic, right down to the lenses. (The hinges are metal, and they work well, but that’s it.) While this worried me at first, you’d actually never know unless you rapped your fingernail against the lenses. They look great, and they’re as clear as my much more expensive glass lenses. They’re very light-weight, which for some may be a selling point. I’m sure the frame is not as sturdy as a standard one, and that’s fine, because it’s not meant to be.

SelectSpecs is offering a service that I really appreciate: fast, attractive, inexpensive glasses. I wore these for a week straight before writing this review, and I’ve had no problems with them at all. While they may not become my primary pair, they’re perfect for when I go hiking, or jogging, or to a bar or something. Anywhere that I’m more likely to be careless or have to worry about external hazards, it will be nice to have this pair with me instead of the ones that will cost me a few hundred dollars to replace.

In fact, the glasses they sell start at $10. While of course I can’t vouch for the quality of their entire selection, I will say that if they’re even half as good as the ones I chose, that’s an incredible value.

Ordering was easy. In fact, I only ran into difficulty trying to figure out where to enter my voucher code…which isn’t something most folks would have to worry about.

You will need your prescription handy, so that’s worth noting. Otherwise you just pick your glasses, choose your color and lens options, decide on a shipping method, and check out. It’s very easy.

So if you or your kids want a second pair to be more adventurous with, want something new to wear for the sake of change, or you’ve already broken your primary pair and can’t quite afford to replace those frames yet, this is definitely a good service, and I’m positive I’ll be using them again.

It’s also nice if you want to dress up as somebody for Halloween, but that character wears different glasses than you do. You can buy a pair closer to theirs in your prescription for $10. You dork.