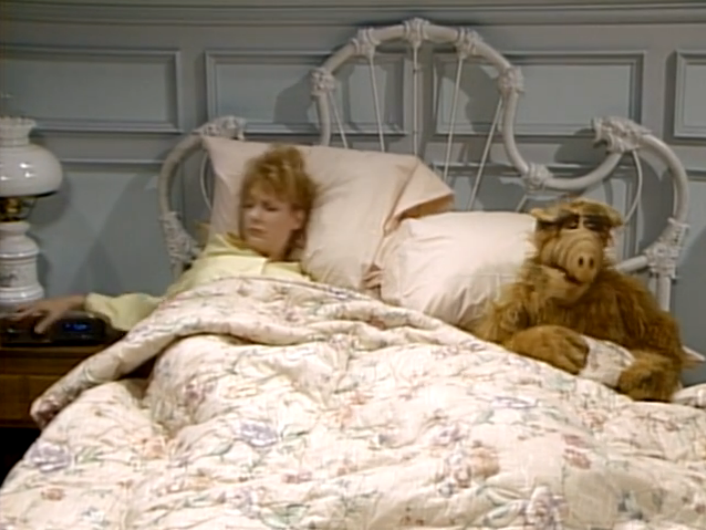 And so we’ve come to the end of ALF, season one. I have to admit, it was both better and worse than I remembered it being.

Watching this show again is a strange experience. It’s a bit like going out and recognizing somebody you haven’t seen since high school. You say, “It’s so nice to see you again!” because it is. There’s a comforting familiarity, but the more you talk and the more you catch up, the more you realize you don’t actually remember this person.

You know the name, of course. The kinds of clothes they wore or the shape of their face. But were they friendly? Were they an asshole? Were they smart? Were they funny?

You have no idea.

You can’t remember who their friends were, how you met, or if you had anything in common. The only thing you remember is that at some point in your life, this person was there, and while it may be nice to see them again, the fact is that that’s all they ever were to you: there.

That’s been my experience with ALF. 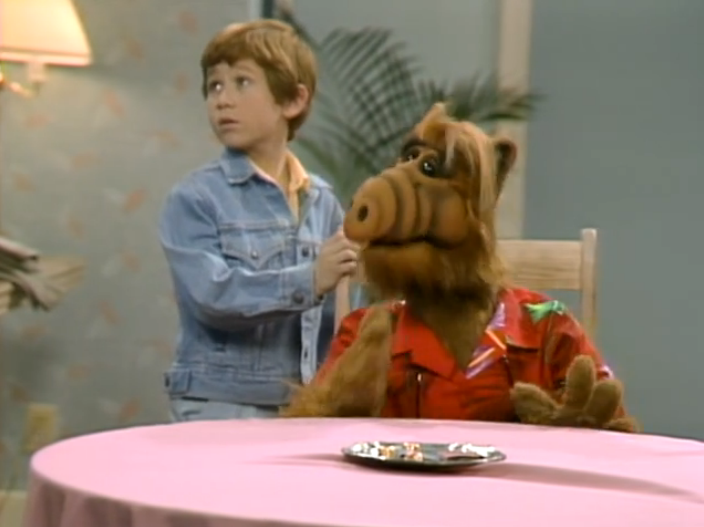 I watched the show the same way I watched every show as a kid: religiously. I loved TV Guide. I loved the Preview Channel. I don’t know why. I memorized listings. I knew which nights would be worth rushing through homework and dinner, and which would not.

I grew up loving television so much that I almost hate it now. I got burned out on it at an early age. I don’t even have TV service, and haven’t for many years, preferring to catch up on the handful of quality shows on Hulu or Netflix instead.

So revisiting ALF should bring memories flooding back. Right? Playing old video games, watching the movies I loved growing up, finding a vintage Teenage Mutant Ninja Turtle at a thrift shop…all of those things bridge the gap between the man I am today and the boy I was several dozen lifetimes ago.

Memories come back. Details. Scents and subtle sounds, as they say. Colors in the void.

But here I am, watching ALF, and I don’t remember jack shit.

ALF was one of the shows I always wanted to get home in time to watch, but before this experiment, I could haven’t told you anything about the show. He came from Melmac, ate cats, loved the song “Help Me, Rhonda.” What else?

It’s odd. I didn’t remember any plot lines, and, aside from the episodes I’ve now reviewed here, I still don’t. I couldn’t tell you anything that’s yet to happen in this show, even though I watched it every time it was on.

I’m tempted to just conclude that there’s a clear, qualitative reason for this: it sucked. But honestly, all kidding aside, that can’t be it. I watched plenty of lousy shows growing up, and I could still tell you at least one plot line. That’s what TV shows are, right? Little stories about a group of characters reacting to some weekly situation.

I remember Tim getting his head stuck to a table in Home Improvement. I remember Stephanie driving a car through the kitchen in Full House. I remember the Perfect Strangers staking out the newspaper office overnight to find out who stole Dmitri the sheep.

None of those were particularly good shows, but I remember them.

I still couldn’t tell you a mother fucking thing about ALF. 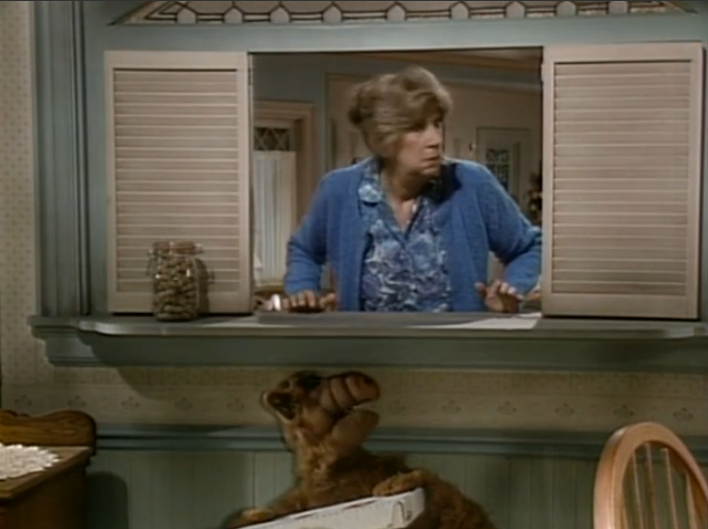 A large part of that, I think, is the fact that we don’t have a group of characters reacting to a weekly situation. We have ALF, who is less a character than an anthropomorphic Jay Leno monologue that lives in a laundry basket, and a weekly target for his ostensibly wacky shenanigans.

Most sitcoms — and certainly all of the good ones — have some amount of chemistry. The actors and characters bounce off each other in sometimes predictable but still entertaining ways.

ALF forcibly restricts this from happening. Instead of characters bouncing off of each other we have them maintaining a respectful distance so that nothing will get in the way of ALF’s comedy routine. 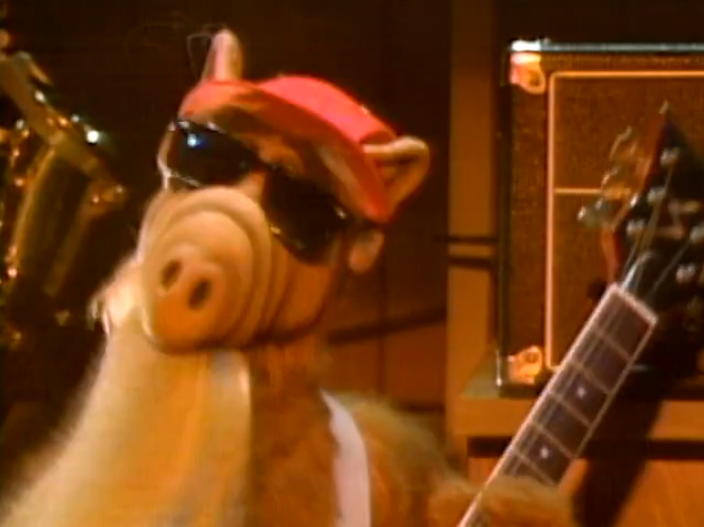 It’s bad writing, yes, but it’s also criminally disappointing. After all, for the millionth time, this is a show about a guy who came from space. There are so many things you can do with that; it’s a literally limitless concept. And yet it plays out in a more limited fashion than most sitcoms in general.

ALF takes up gambling. ALF sells makeup. ALF writes for a soap opera. Seeing how many episodes barely even acknowledge the fact that he’s not from this planet (and when they do it’s often for the purposes of a single throwaway gag) is a strange feeling. It’s like stumbling through a wormhole into a dimension in which the show MASH exists more or less as we know it…but the characters never mention the Korean War. Or like a version of Cheers in which nobody ever refers to the bar.

And those examples are settings. The settings of those show have more character than any of the actual characters have in ALF.

ALF has no idea what it’s trying to do. It’s superficially a show about a family that lives with an alien. (Or, I guess, an alien that lives with a family.) But season one has been a weekly collision of incompatible intentions and overlapping confusions. Whereas MASH was probably conceived with certain specific, defining characteristics in mind (field hospital, gallows humor, absurdity of war, moral compass, inevitability, human stakes), ALF‘s list of defining characteristics was much shorter (a puppet, and whatever the puppet does that week).

Something like that won’t necessarily lead to a bad show, but it’s safe to say that the lack of direct focus would itself have to be a defining characteristic…a part of the show’s DNA, rather than an unfortunate byproduct of a production staff that wished it were dead.

That’s what’s frustrating about ALF: all that wasted potential. This show could have been good…but it also could have been a gloriously tone-deaf misfire. Instead it settled for a kind of intermittently competent blandness. In a word, it allowed itself to become forgettable.

I don’t think it’s coincidental that the three best episodes of season one are illustrative of richer directions this show could have taken. 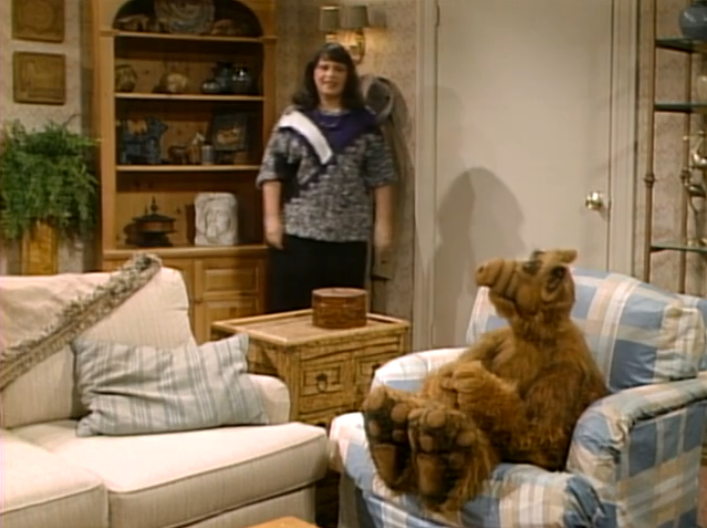 “For Your Eyes Only” explored the emotional side of what ALF’s been through. His planet is gone, everyone he’s ever known is dead, and he’s confined to a single home on an unfamiliar world, unable to make friends. Now, yes, I’m admittedly a big sap when it comes to comedies that allow themselves to explore emotional territory and delve into the psychologies of their characters, but even if we disregard that, there’s still a lot of potential in the premise. ALF desperate for companionship, for acceptance, for respect…all of that could lead to infinitely funnier situations than the guy he lives with going skydiving, or his fat neighbor burying a slab of spoiled beef. This was the first episode to pose the question of who ALF is. There should have been a lot more of that, since ALF’s extraterrestrial origin is about the only unique thing the show has to offer. 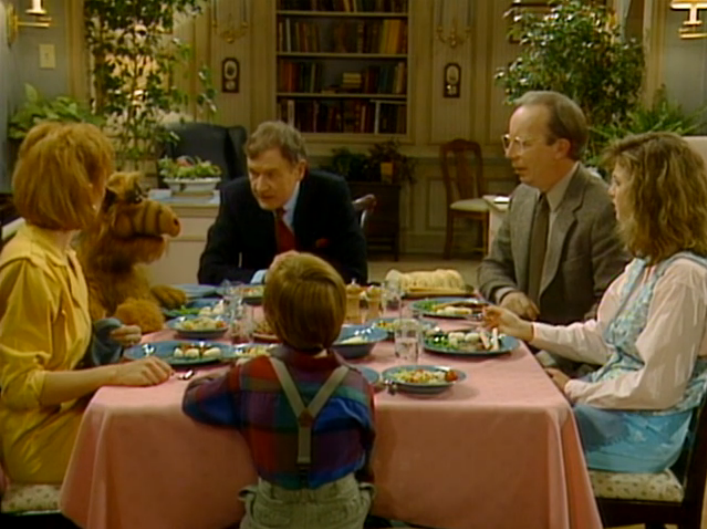 “Going Out of My Head Over You” explored the logistics of living with a space alien. From simple things such as lying about where some hair on the couch came from to much larger inconveniences, like being unable to bring friends home, and getting driven batty by the creature’s strange quirks and habits, this too is a fruitful vein to mine for comedy. If “For Your Eyes Only” made us feel even slightly what ALF was going through, “Going Out of My Head Over You” shifts perspective and allows us to see the situation through Willie’s eyes. As it turns out, neither side is happy. ALF may be confined to the house, but because he’s there the family can’t have much of a social life either. ALF may think it’s unfair that he can’t eat the cat, but it’s the family that has to keep a close eye on him every hour of the day to prevent him from eating the cat. The central relationship of this show — ALF and Willie — is therefore defined by a sort of logistical stalemate. Each side wants it his way, neither side can have it his way, and both of them are too stubborn to meet in the middle. There are myriad ways to explore that theme satisfyingly (see any given episode of The Odd Couple), and while “Going Out of My Head Over You” absolutely does that — and also puts an unexpectedly sweet button on it — it’s an exception to the rule, suggesting a version of ALF that not only knew what it wanted to do, but knew how to do it. 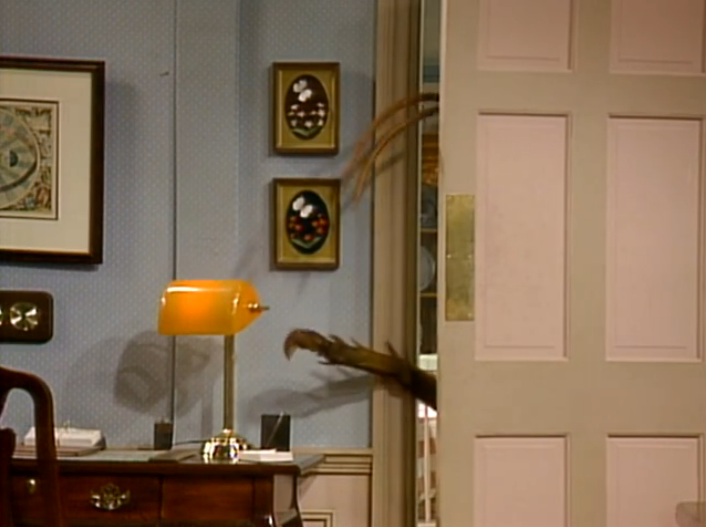 Finally, there’s “La Cuckaracha,” which explored the comic potential inherent in the simple absurdity of the show’s setup. By embracing the nonsense and — shocker! — having fun with it in the process, “La Cuckaracha” was one of ALF‘s most satisfying episodes. The two examples mentioned above pull the show into emotional and logistical territory, either of which, as we’ve seen, can work well. “La Cuckaracha” explores another area entirely, and proves that even if the writers and actors had no interest in treading relatively serious ground on a regular basis, they had another option available to them for a great sitcom: the complete dismissal of reality and characterization in favor of infective chaos. That would have been a great way to turn ALF into a memorable show, while also playing to its low-budget cheesiness and workshop-level acting quality. You can take the show seriously or not take the show seriously. Either way, it can work. The one thing that doesn’t work is taking it just seriously enough that you manage to fail on a regular basis. And that, unfortunately, is the ALF we got. 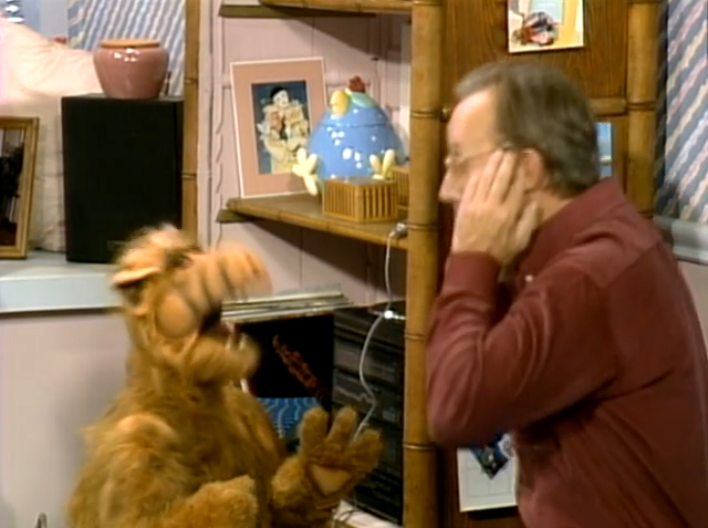 I have heard a few times that season two is better. Maybe it is. We’ll find out soon enough, but either way, I’m looking forward to it. Writing this series has been tremendously instructive to me as a writer. It’s one thing to watch ALF and say “this sucks.” It’s another to sit down and pull it apart, scene by scene, to figure out what’s working and what is not.

I’m grateful that I chose ALF for this project. At this point, I can hardly believe that I even posed the question of what to review. ALF just feels…correct. 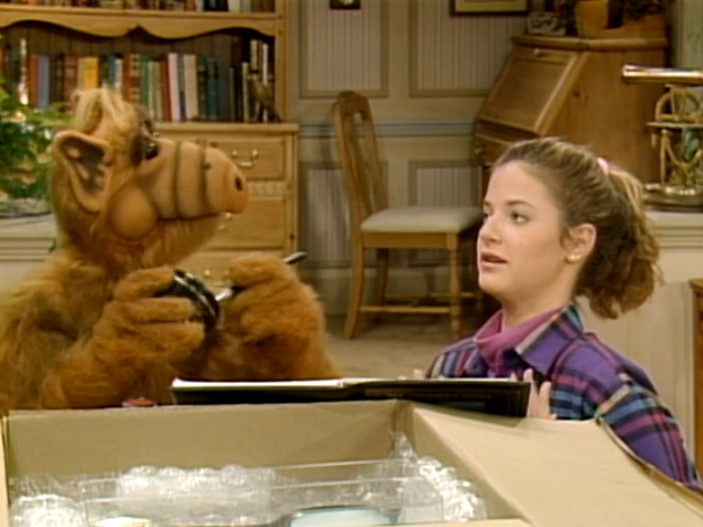 There really is something addictive about it. We weren’t just dumb children who liked looking at a puppet; the show really is seductive in its unintentional stupidity.

I cheated slightly above; there is one specific moment I remember watching as a kid. ALF asks Willie for his wristwatch so that he can do a magic trick. Willie hands it to him, and ALF sticks the watch in a sock and smashes it with a hammer. The watch, of course, is destroyed.

My mother, watching with me, said, “Why did he give him the watch?”

And yet she was right there with me, watching this garbage every week. My brother was there, too. And my father.

And millions of others all over the world.

Not one of them could justify Willie handing ALF that watch. But all of them tuned in the following week, and the week after that.

ALF is not a good show, but like a fire at a carnival it’s a spectacular tragedy. You know the memory will fade and you know it’s healthier to just turn away…but you don’t. 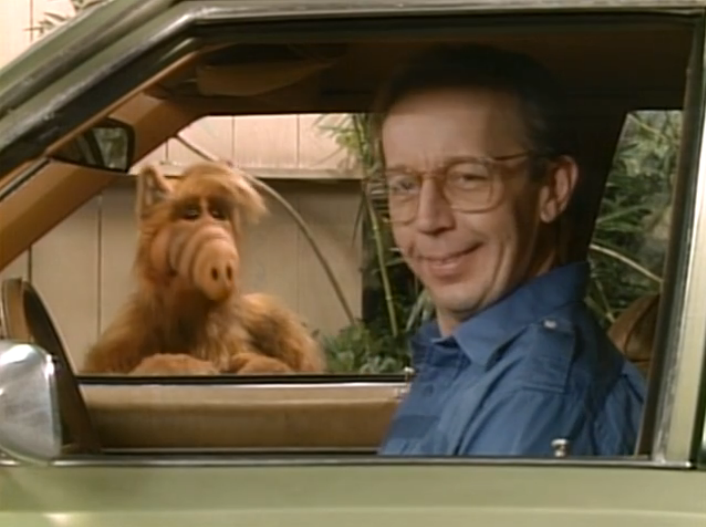