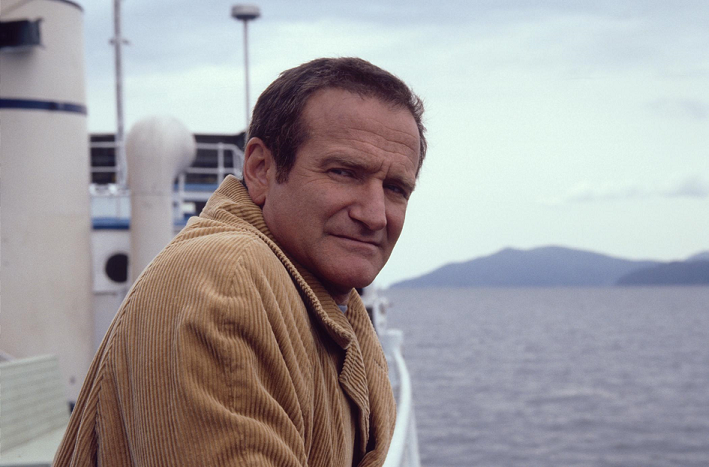 I never expected I’d be writing one of these about Robin Williams. After all, I never really liked the guy.

I don’t mean that in a personal sense. I mean that his “identity” never did much for me. He was good at what he did — that much, it’s fair to say, was obvious — but what he did wasn’t what I was interested in.

And now he’s dead, and I’ve done as much reflecting and soul searching as I’ve ever done. The most since Salinger passed a few years ago. So why is it that the death of an actor / comedian I didn’t even enjoy hit me at least as hard as the death of the man who wrote one of the most important books I’ve ever read?

I know why: the dialogue that’s been opened.

I was out the night the death of Robin Williams was reported. By the time I got back it was all over my social feeds, and well beyond the point that people were wondering if it was a hoax. It was not a hoax. People listed their favorite Robin Williams movies. I went to sleep.

The reason I went to sleep was this: I was depressed.

That night, something happened. I’d prefer not to go into it. Suffice it to say that often when I feel depressed (and when most people feel depressed, I’m sure) there’s no distinct trigger. The dark cloud settles, and I want to shake it, but I can’t. It happens. Some creeping — and then seething — sense of hopelessness, worthlessness, and helplessness takes over. And, all at once, I’m powerless.

That night, though, there was a trigger. I know why I was depressed. But even having a specific point of focus for those feelings doesn’t help. It doesn’t stop them from spiraling further. If depression begins from a rational place, which it sometimes does, it never stops there. If it did, we’d just call it sadness. Instead, it poisons our perception of the world around us. That sunset looks hideous. This drink tastes like sawdust. It hurts to look people in the eye so I’ll look down and wonder why I was born if this is the way I’m passing the night.

Why bother? I am avoiding life. I am looking at the world around me and I am thinking, “I don’t want this.” I hear somebody laugh, somebody far away, and I wish I were invisible.

Why am I here?

When I’m depressed, I go to sleep. Nearly always, that helps significantly. I wake up feeling a little closer to centered, and a new day resets the routine. Alarm clock, shower, get dressed, instant coffee, hit the road, start working. Life on a rail. It sounds like it should be restrictive, but when you’re depressed it’s the most liberating feeling on Earth. It’s a chance to step away from yourself. From the lies your mind makes you believe. It might not be fulfilling, but it’s not destructive, and that’s progress.

I’ve even conditioned myself. So effective is sleep — for me — that I can just about will it. If I’m not tired but I’m already depressed by three o’clock? Good night. It’s easy. I’m asleep before I know it, because I think I realize, on some terrified level, that staying awake is going to bring me places I’ll regret visiting. So my mind, knowing no alternative, has learned to shut itself down.

The day after Robin Williams was announced dead, I did not feel better. Because now it was clear that he’d committed suicide.

Depression is the quiet killer. It destroys from within. It starts deep…so deep it feels like it’s the most important part of who we are. It’s not a core component…it’s the core itself. And every decision we make and every emotion we feel and every time we decide to stay in for the night, it’s informed by the core. The times that we get to laugh, or have fun, a real weekend of genuine connection with people we love…they feel like brief little vacations. That’s not the real us. The real us…that’s in the core. And at the end of every vacation, we know we have to go back.

People opened up about that. About a lot. They said it better than I ever could. Depression (and self doubt, and lack of confidence, and anxiety) is something I struggle with almost every day of my life…at least to some extent. Often I can get over it. Sometimes, unquestionably, I can’t.

Apparently, neither can others. That was no surprise.

How many others…and which others…well, those were surprises.

The sheer volume of people laying themselves bare, speaking openly about the things that pain them the most deeply, doing so in unpracticed ways that made it clear that these were things they wished they could have said a long time ago…it was humbling. It was the aftermath of a tragedy…you had the assholes on the sidelines, but nobody was paying attention to them. The truly compelling image was that of the stranger embracing the stranger, bonding, at once, over a shared horror.

It needed to be somebody big enough for the shock to be devastating. It needed to be somebody unexpected enough that when the remarks of “coward” came out, one million voiceless depressed people would step forward and put themselves on the line for sole purpose of proving that it’s not cowardice. It’s pain. It’s agony. It’s day after day struggling to keep one’s self together. And when somebody fails — or gives up — it’s not because they were cowards. It’s because too much of the tide came in at once, and they couldn’t stay afloat. A man or woman who spends every day facing personal demons and eventually finds himself or herself outgunned is not a coward. If anything, they died courageously, fighting to the very end in the face of impossible odds.

My friends were sharing their stories. People I’ve known for years, in some cases deeply. Their friends were sharing theirs. Somebody I haven’t seen in ages, who seemed like she had her life together, at last. Souls were being revealed. Pain was being revealed. Everything that we tried so hard for so long to keep secret and keep quiet and keep inside was now — voluntarily — being laid out for everyone to see.

And there was no abandonment.

And there was no disappointment.

And there was no reconsideration of friendships or relationships.

There were strangers embracing strangers. And it was the aftermath of a tragedy that occurred because — and only because — these were things people were not supposed to talk about.

Seeing so much being posted openly, I asked people in general to share with me (anonymously) any words they wished to contribute for a feature that will run tomorrow.

Within minutes I received a submission from somebody I’m pretty sure I’ve never met. A few minutes after that, there was another. And another. And people were sharing the request. And they’re still coming in, as I type this. In a few cases, people have said, “I don’t even mind if you decide not to use this…I just appreciate the chance to get it all out.”

Think about that, too. If I don’t use their submissions, what did they do? Well, they just sat down and wrote. And felt better because of it.

What was to keep them from doing that in the first place?

We’re so discouraged about speaking honestly and openly about mental health issues that we don’t even want to do it with ourselves. We need a tragedy. We need a request. We need a shock to our systems so severe that we find ourselves reacting in ways we didn’t think we could. Some of us, I’m sure, need even more. Because exactly as deep as that depression is, there’s also the warning that we are not supposed to speak of it.

Because we never speak, we never learn. Those without depression don’t realize how pervasive it is, how many of their loved ones it affects, and how easy it could be to understand. And those with depression never realize how many people they know have faced very similar things, or worse, and are coping with them in their own way. When mouths stay shut, everybody — everybody — loses.

Tomorrow, you will hear depression speak.

And that’s important. Because however it may feel, not one of us has to do this alone.