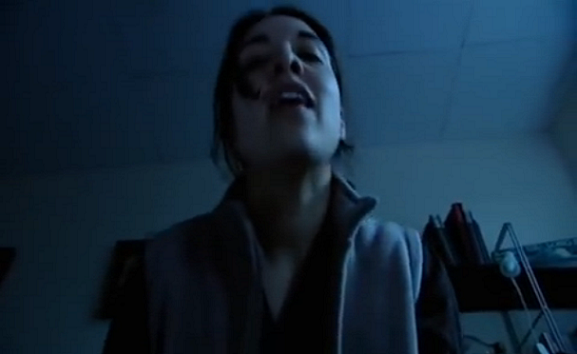 The answer is yes.

This is an easy one.

Some background — though, to be frank, not much is necessary: Jeremy, Mark’s roommate, has his mother visit. In tow is her current boyfriend, and his daughter Natalie. Mark does briefly wonder if he feels anything for Natalie, but pretty quickly decides he does not.

After a night of drinking, Mark wakes up to find Natalie having sex with him. He tells her to stop. He tells her he doesn’t want to. But she continues.

This is rape. If there’s anybody out there who sincerely disagrees, I’d love to hear that argument.

And yet…if it is rape…why don’t I mind it?

Don’t get me wrong; I’m not supporting the act itself, but it doesn’t put me off enjoying the episode as a whole. In fact, “Jeremy’s Mummy” may even be one of my favorites.

But a main character is raped. I can’t even question that. This man is sexually assaulted while we watch. Why am I not bothered by this enough that it casts a shadow over the rest of the episode? Why do I still laugh at the jokes? Is it just down to the writing and the performances? (Top notch, as they nearly always are in Peep Show.) Is it the fact that it’s treated intelligently rather than either flippantly or horrifically?

Later in the episode, Mark dismisses the idea that he’s been raped, though he certainly has. He does this in a desperate attempt to save face with Natalie’s father, who’s offered him a great business opportunity, so his motivation for diminishing the act is clear, but even if we did accept that…even if we did take it at face value that, okay, she had intercourse with him against his will but now he’s okay with it, does that change anything that happened?

No. It doesn’t. Rape is not retroactively undone, and the mindset that it can be is massively destructive. I’m reminded of one of the sourest things I’ve ever read: Seth Rogen defending the rape scene in Observe and Report.

When we’re having sex and she’s unconscious like you can literally feel the audience thinking, like, how the fuck are they going to make this okay? Like, what can possibly be said or done that I’m not going to walk out of the movie theatre in the next 30 seconds? And then she says, like, the one thing that makes it all okay.

But no. There is no after the fact consent. To even suggest that there might be such a thing is to allow rape on the grounds that the person being raped might come around and enjoy it…which is inordinately disgusting.

More recently, Game of Thrones had a rape scene which was probably destined to be controversial, but not nearly as controversial as the defense that director Alex Graves offered, assuring fans that the rape “becomes consensual by the end.”

In Observe and Report, the rape ruined the film for me. It wasn’t a great film to begin with, but a moment like that, such a brutally tone-deaf trivialization of one of the worst things one human being can do to another, made it clear to me that nobody involved with this film had any idea of what they were doing.

Rogen’s character forcibly fucks an unconscious woman, who wakes up during the act, and tells him to keep going. You’d need a far more self-consciously twisted film to pull that off, but I don’t think Rogen believed there was anything to pull off. It’s perfectly fine, apparently, because during the rape she drunkenly shrugs it off. And that’s bullshit.

On the dramatic side of things, we have Game of Thrones. Here, rape isn’t used as a visual punchline. (The fact that I can even type out that phrase makes me feel a little sick.) But it’s minimized in the same way. This act of sexual violence is (at least relatively) excusable because, eh, she’s cool with it later.

These are things that stick in my gullet. An act of rape isn’t something that has no place in entertainment…they can be handled well, and Life of Brian even managed to succeed in making the idea of “after the fact consent” funny. But an artist behind the entertainment should not be telling actual human beings not to get bent out of shape about it…it’s just rape, and, hey, she should be thanking him even, because it was good rape.

So why, I ask again, doesn’t Mark’s rape hit me the same way? I honestly can’t figure it out. Peep Show certainly has a long pedigree of mining terrible uncomfortable (and sometimes brutal) things for comedy, but I have to say that if the gender roles were reversed — say, Dobby waking up to find Mark in the process of fucking her — I’d be mortified. Just the thought of that seems to be in terribly bad taste, and I cannot imagine any amount of good jokes redeeming that.

Is it simply a matter of gender roles? I don’t think so…but I suppose it could be. If it is, I feel pretty lousy about it…as though rape is only tragic if it flows in one direction.

Then again, Rimmer is raped by a woman in Red Dwarf, and that certainly strikes a sour note for me…so it can’t be as simple as gender. Is good writing really enough on its own to redeem a rape scene in comedy? Or is there something else at play here that I’m failing to acknowledge?

Then why does the episode still work?

Or does the episode still work?