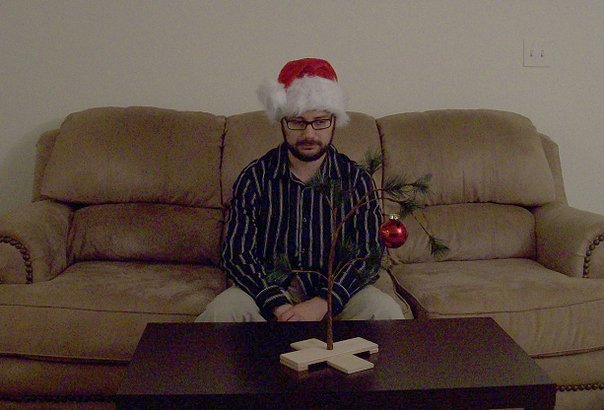 Longstanding readers and longreading bystanders know Christmas Eve ’round these parts is a time to gather, watch terrible TV specials, and share jokes about Lassie getting hit by a car. And this year, it’s no different.

However, this year it’s different!

The event will actually double as a kind of telethon benefiting The Trevor Project, a counseling / suicide prevention service for LGBTQ youth. The holiday season, as you well know, is an extremely difficult time for many, and I tried hard to figure out some way that I could turn this event into something that might help those who suffer from depression and other mental health issues.

It’s been a hard year. I think that’s fair to say. For that reason alone I’m glad to have the ability to set up a humorous event like this and keep spirits light, but if you find it in your heart to contribute during the event, I know many, many people who need it will feel the direct effect of that generosity.

Okay, now that I’ve made you all sad, let’s laugh!

Last year we screened a shed-load of terrible Christmas specials, making history as we became the first people ever to intentionally watch Major Dad. There was also much more, including the shocking Lassie special that opens with the titular dog getting creamed by a driver who is never caught or even searched for, and the first three minutes of ALF‘s Christmas episode over and over again.

Of course, the programming on offer was just the foundation. It was the live chat that really made it a great night, with viewers riffing on the shows and each other — and me… — and basically turning the entire thing into the ideal Christmas party for introverts: everyone appreciates what you have to say, but nobody needs to know you exist!

This year it’ll be similar. You won’t need to worry about where to tune in or how to donate or anything like that. Just come here at the appointed time. I’ll try to embed a feed right onto this page, but if I can’t do that, I’ll have a link available and ready to go.

So, anyway, mark your calendars! It’s going to be the best thing ever. Again!

Noiseless Chatter Xmas Bash!!
Where: Here!
When: Wednesday, December 24. 8pm Eastern to midnight!
What: Even more insane Christmas specials, original programming, a few goodies and surprises (to be revealed in the runup!), and live chat from the funniest people who ever gave up their Christmas Eves to watch this shit in their underwear.
Why: To benefit The Trevor Project, and, equally, because why not.