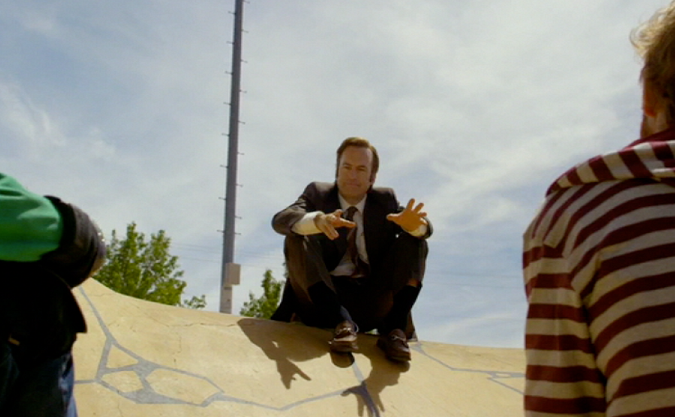 Let me get the elephant out of the way first; I don’t have cable. That means I’ll be a day behind on my Better Call Saul reviews. I don’t think that will matter in the long run, but in this particular case it means I’m writing about episode one while you’re all watching episode two. Do me a favor and try to avoid episode two spoilers in the comments, but otherwise feel free to pick apart the fact that everything I say here has already been disproven by the second installment. (Oh, and, needless to say, these reviews may well contain their own spoilers, so if you haven’t watched the first episode yet, go do that. It’s good.)

So, here we are. Breaking Bad is over, but we have another opportunity to dip back into its universe. It’s a spinoff. And a prequel. And…a sequel. But we’ll come to that in a moment.

If any character from Breaking Bad seemed like he could carry a show on his own, it would indeed have been Saul Goodman. Saul always did seem to me like an intrusion from another world. A welcome intrusion, I hasten to add, but when Walter described him as coming off like a circus clown, he was echoing my thoughts as well. Saul was the jester in a tragedy.

His introduction on Breaking Bad was given an entire episode; one full of complicated two-handed scheming to get ahead, and a strong prioritization of money over justice. That episode was also called “Better Call Saul,” and that short summary could apply to this introductory episode as well.

Saul Goodman has always been in danger of becoming a cartoon character. Yet, I’d argue he was kept just in check by Vince Gilligan and co. While his dialogue was too clever by half, it always seemed rehearsed. It’s not that Saul was witty…it’s that Saul was prepared. When we see him delaying a court case so that he can practice his precise words — not only what he will say, but what he will say in return — it bears that suspicion out. And I think it says a lot that the prosecutor in this very court case, which goes deservedly south for our hero, says absolutely nothing. He simply gets up and shows the jury the evidence. The prosecutor knows, or senses, that you won’t win a verbal sparring match with Goodman. Refuse to engage him, though, and you’ve got him on the ropes.

Better Call Saul, already, is filled with these little details that manage to define an outsized character without necessarily humanizing him. Perhaps down the line we’ll get our tear-jerking moments, but I wouldn’t hold my breath for them. Goodman is a strange creature, given to flights of theatrics and rushes of inventive panic. Sitting him beside more “traditional” television lawyers (such as the aforementioned prosecutor, or Mr. Hamlin in a later scene) reveals that Saul’s world wasn’t crazier than Walter’s; Saul was the comic outlier there, too. He’s the comic outlier everywhere.

One of the reasons, I believe, that people surrendered themselves so willingly to Breaking Bad was its promise of a built-in termination point. Whereas so many shows start off promisingly and then spin their wheels until the money stops coming in, Breaking Bad told us in the first episode that Walter White was going to die, and it was going to happen sooner rather than later. Vince Gilligan could have reversed that decision in any number of ways at any point, but, ultimately, he didn’t. Even when Walter “beat” cancer, it was already replaced by a much more frightening danger. Tension cannot be ratcheted up indiscriminately; at some point, it needs to go somewhere. Otherwise your audience realizes that you don’t know what you’re doing.

Better Call Saul, surprising me, opens with the promise of a termination point as well. Granted, we knew eventually that our favorite criminal lawyer would meet Walter White, and we know his story from there. But so what? Couldn’t Better Call Saul trot out silly court cases and situations indefinitely? Does he actually have to get anywhere?

The opening of “Uno” says, yes, he does. In fact, it picks up where Breaking Bad left off for him. He’s managing a Cinnabon in Omaha. He has a new name, a mustache, and impaired vision. And sometimes, when the nights are particularly lonesome, he’ll pop in a VHS of his old commercials, and remember what life was like when it had some color.

This means, again, that Vince Gilligan is taking us somewhere. As easy (and fun) as it would have been to give us The Continuing Adventures of Young Saul, we enter this story knowing that it’s not going to have a happy ending. And that’s tantalizing.

“Uno” does a lot of scene setting, which is understandable. The fact that in many cases it only sets the scene and leaves the rest for now to our imagination (such as the possible ousting of Chuck McGill from his partnership, and our hero’s romantic flounderings) is positively laudable. We trust the show to explain these things in due time, and the show trusts us to respect it and have patience.

However, there’s a problem. At least potentially. And here it is: James McGill is already Saul Goodman.

He has a different name, far less money, and a dearth of clients. He drives a Suzuki Esteem with one red door. He has more hair and has not yet discovered Bluetooth.

Now take the Jimmy McGill of “Uno” and compare him to Saul Goodman. Superficial changes aside, I don’t think you’d see a different person. At all.

We know he gets more successful, and we know that if he does experience a serious change of personality, it can’t be permanent. So what is the journey of Jimmy McGill? I don’t know, and considering the fact that I know both how his story begins and how it ends, that’s an unexpected admission.

Ultimately, Better Call Saul deserves to be thought of on its own merits, but the fact that it features more than one familiar Breaking Bad face — and is undoubtedly to feature more (hurry up, Kuby!) — means that we’re going to hold it to a higher standard than we would some unrelated Bob Odenkirk law comedy. Then again, we probably wouldn’t be watching that unrelated Bob Odenkirk law comedy.

As of the end of “Uno,” my concerns are more like questions. While some of the comedy went a bit broad (a phony severed head rings particularly false after the exquisite pain of Breaking Bad‘s more brutal moments), there are enough quiet passages of McGill facing something inside, something we can’t see yet. Something, maybe, we will never see. And at the very least, I’m looking forward to exploring that…however indirectly.

If it’s fun to spend time with Saul Goodman, then that’s all we really need. In a show that opens with its own inevitable, sad coda, though, I hope that’s not all we get.