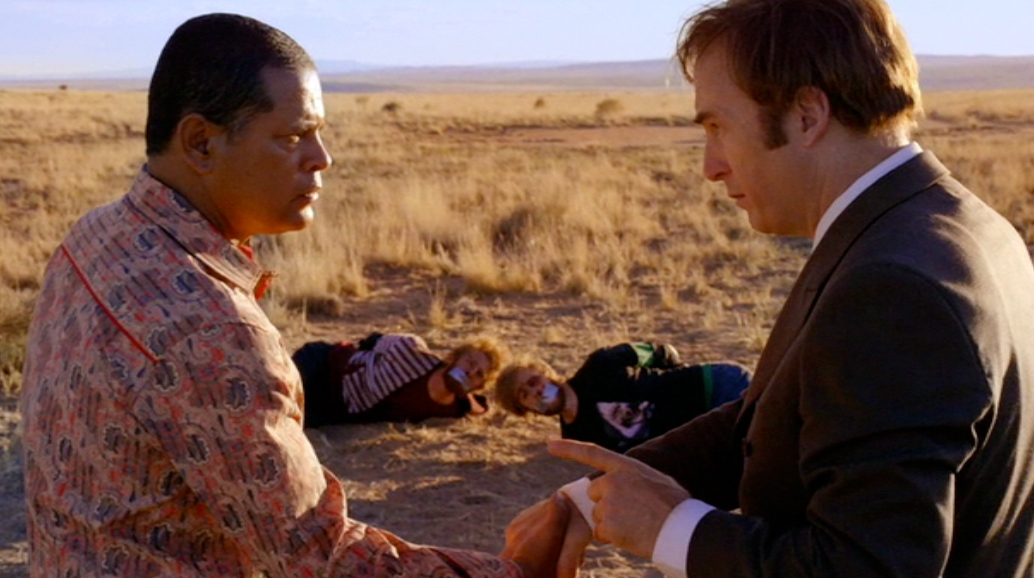 Is it too early for Better Call Saul to produce a masterpiece? Maybe. But I’m calling this one anyway.

“Mijo” is an incredible piece of television. A tragic comedy in four distinct acts, each showing us another side of James M. McGill, amounting to what is essentially a portrait of the man we will be spending the rest of our episodes with.

I’ll start by saying that I cheerfully retract my concern that McGill was already Goodman. While there’s an awful lot of overlap, there’s a crucial difference; McGill has a conscience, and a reluctance to stay at the table after being dealt a lucky hand. It provides us, at least potentially, with an idea of the psychological territory Better Call Saul might chart. What will it take for him to willingly silence his conscience? How much must he stand to gain before he stops saying, “Absolutely not” and starts saying, “Yes, please”?

“Mijo” illustrates that very clearly in my favorite scene of the night, but we’ll come to that in due time.

“Uno” left us with a pretty intense cliffhanger; maniacal drug baron Tuco visited from Breaking Bad to jam a gun in our new protagonist’s face. This, I concede, is a thrilling taste of the great things Better Call Saul can do by keeping its action in the same town that Heisenberg eventually destroyed.

After all, in Breaking Bad, Tuco was fucking terrifying, yes. And yet he was also neutralized as a threat fairly quickly. I could go on to list all of the other threats that came and went over the course of that great show, but your mind is spinning through them already. A resurrection of a character like this is by no means a cheat, and gives us a chance to either further flesh out what made them tick (which is what happens here), or simply unleash them once again to do more damage (as I expect we’ll eventually get with Mike).

Perhaps the most interesting thing about Tuco’s appearance is the fact that, relatively speaking, the guy’s at a pretty even keel. Of course he beats two teenagers half to death and nearly cuts off McGill’s thumb, but it’s that “half” and “nearly” that signify the difference. As with McGill, there’s a push that hasn’t happened yet…a tipping point that’s not quite been reached. Tuco is still on this side of his own personal event horizon; he’s a maniac, but not yet beyond reason.

It’s different from the Tuco we knew, and yet perfectly in line with what we know to be his destiny. There’s even a physical manifestation of this relative calm: his third hanger-on, Nacho.

When Gonzo and No-Doz show up, it’s for the purposes of cameo. Right? Well…no. They don’t have much to do, but their presence is required, simply because they enable us to feel that something is off. We remember the Tuco / Gonzo / No-Doz dynamic. We remember, especially, how it ended. Now, here, there’s what feels like an interloper.

He’s an artifact of calmer times for Tuco. Times we never knew, but which are immediately understandable. Nacho has a much bigger role than either of the two henchmen we’ve known longer. He takes control. He lets Tuco feel like he’s the king, but it’s Nacho pulling the strings. He regulates his boss’s heat. He’s cruel (or at least criminal), but he uses his mind. He’s clearly the brains of the group. The fact that he doesn’t make it to Breaking Bad in itself explains the entirely unbridled Tuco we encountered there.

McGill’s dealings with Tuco make up the first act of “Mijo,” and they reinforce an observation I made in the previous review: if you want to win against the man who would be Saul, you can’t engage with him. Tuco is in total control in the living room, when he lets Jimmy spill a stream of desperation to willfully deaf ears, and our hero is helpless. In the desert he allows himself to drift into a discussion, and everything tips immediately (and hilariously) in McGill’s favor.

We saw a bit of actual lawyering in the first episode, but here we get a sense of why Jimmy is good at what he does. The incompetence isn’t genuine; we knew that from Breaking Bad, and we see that it’s no less true here. McGill never positions himself as more intelligent than who he’s talking to, but we know he is. He’s a student of human nature, throwing out as much as he can in the hopes that something sticks, and always willing to look foolish. If he looks like he’s not a threat, after all, people will let their guard down. Tuco lets his guard down, and gets to feel like he’s being “tough but fair” by giving McGill what he wants. He gets to be the judge. The fact that this lawyer is deciding every move for him — and reigning him back whenever he starts to stray from McGill’s intentions — doesn’t register. Tuco feels like he’s in control because that’s what proto-Saul wants him to feel. And Odenkirk plays it masterfully.

Of course, Jimmy McGill knows when he’s won (an important difference between he and Saul Goodman), and so ends the negotiations with a couple of broken legs for his accomplices. He knows he can only push so far.

Which leads us into the second act, in which we see Jimmy at ease. “Mijo” opens with the man in a corner, doing his best to worm his way back out of danger. There’s an element of almost invisible panic driving everything he says. But when he’s free? He gets to be himself.

And that’s my favorite scene in the episode. Jimmy flirting with a woman he meets at the bar is the adorable kind of sleazy, an accomplishment that was only possible because we don’t hear a damned thing he’s saying, I’m sure. In fact, until its final moments, we don’t hear a word that anybody is saying in this sequence. Body language, gestures, implications, gazes. Those are what tell this amusing short story that we’re treated to after the first act’s Waste Land.

In the background, however, a man is snapping breadsticks, and it rattles McGill in a way that we know it won’t rattle Goodman. It’s his conscience that drills in on this image — and its accompanying sound effect — and won’t look away. He’s aware of the fact that people are hurt because of him. He’s correct earlier when he reminds one of the boys that he talked them out of a death sentence, which for Goodman would be enough. For McGill, however, it makes him physically sick.

Its effects linger on into the next day, when he wakes up on Chuck’s couch and every viewer in the world is reminded that only Bob Odenkirk could make a line like “Take off the space blanket” sound like the funniest thing in history.

The third act is a long, gorgeous, artful, clever, soaring montage of McGill doing the closest thing to public good he’ll ever do: acting as a public defender to whomever needs him. Everything about this sequence is perfect. The framing of every shot, the overlapping crowds in time-lapse, the continuous plunk of disposable coffee cups, the way he squeezes aside to let a criminal — and then the police chasing him — down a stairwell, the gleefully repeating punctuation of his arguments with Mike.

It’s this sequence that elevates “Mijo” for me from something quite good to something excellent. A reminder that Better Call Saul knows its purpose, even if we maybe don’t. It’s a confident, elaborate, brave setpiece in an episode that already had one. That’s how strong Vince Gilligan is at what he does; he can afford to double down. He knows just how to play with a tipping point, and we get one here, in act three, with what could almost qualify as an alternate future for James McGill.

Sure, he wouldn’t amount to much, and he’d never bring home more than $700 per defense. He’d argue with parking lot attendants until the day he dies, and be cheated out of every thirtieth cup of coffee.

And yet, he just might be happy. And safe. And doing a world of good for the rare defendant that really needs him, and who deserves a showboat lawyer who can turn a jury against their preconceived notions.

But we don’t end there. We have a fourth act.

We’ve seen Jimmy in danger, Jimmy at ease, and Jimmy at his best. Now we see him alone. Unsatisfied in a dingy office, nestled deep in the back of a nail salon. A door that won’t open all the way. A telephone that never rings. However full his weeks as a public defender may be, he wants something different. Maybe not even something more…but something different.

Nacho returns. Without saying it in so many words, he’s looking to partner up with Jimmy. At least once.

When he’s at his lowest, when he’s vulnerable, when he has nothing to distract him from the fact that he’s nobody, that’s when an opportunity like this can really sweep him away.